Two Ways to Belong in America

Born in 1940 and raised in Calcutta, India, Bharati Mukherjee immigrated to the United States in 1961 and earned an M. F. A. and a Ph. D. in literature. Mukherjee is the author of several novels, including Tiger’s Daughter (1972) and Jasmine (1989), and short story collections, such as The Middleman and Other Stories (1988). She teaches literature and fiction writing at the University of California, Berkeley. “Two Ways to Belong in America” first appeared in the New York Times. It was written to address a movement in Congress to take away government benefits from resident aliens.

Don't use plagiarized sources. Get your custom essay on
“ Two Ways to Belong in America ”
Get custom paper
NEW! smart matching with writer

Like her fiction, though, it is also about the issues that confront all immigrants in America. This is a tale of two sisters from Calcutta, Mira and Bharati, who have lived in the United States 1 for some 35 years, but who find themselves on different sides in the current debate over the status of immigrants. I am an American citizen and she is not. I am moved that thousands of long-term residents are finally taking the oath of citizenship.

She 2 is not. Mira arrived in Detroit in 1960 to study child psychology and pre-school education. I followed her a year later to study creative writing at the University of Iowa.

When we left India, we were almost identical in appearance and attitude. We dressed alike, in saris; we expressed identical views on politics, social issues, love, and marriage in the same Calcutta convent-school accent. We would endure our two years in America, secure our degrees, then return to India to marry the grooms of our father’s choosing.

Instead, Mira married an Indian student in 1962 who was getting his business administration 3 degree at Wayne State University. They soon acquired the labor certifications necessary for the green card of hassle-free residence and employment.

Mira still lives in Detroit, works in the Southfield, Mich. , school system, and has become 4 nationally recognized for her contributions in the fields of pre-school education and parent-teacher relationships. After 36 years as a legal immigrant in this country, she clings passionately to her Indian citizenship and hopes to go home to India when she retires. In Iowa City in 1963, I married a fellow student, an American of Canadian parentage. Because 5 of the accident of his North Dakota birth, I bypassed labor-certification requirements and the race-related “quota” system that favored the applicant’s country of origin over his or her merit.

I was prepared for (and even welcomed) the emotional strain that came with marrying outside my ethnic community. In 33 years of marriage, we have lived in every part of North America. By choosing a husband who was not my father’s selection, I was opting for fluidity, self-invention, blue jeans, and T-shirts, and renouncing 3,000 years (at least) of caste-observant, “pure culture” marriage in the Mukherjee family. My books have often been read as unapologetic (and in some quarters overenthusiastic) texts for cultural and psychological “mongrelization. ” It’s a word I celebrate. Mira and I have stayed sisterly close by phone.

In our regular Sunday morning conversations, 6 we are unguardedly affectionate. I am her only blood relative on this continent. We expect to see each other through the looming crises of aging and ill health without being asked. Long before Vice President Gore’s “Citizenship U. S. A. ” drive, we’d had our polite arguments over the ethics of retaining an overseas citizenship while expecting the permanent protection and economic benefits that come with living and working in America. Like well-raised sisters, we never said what was really on our minds, but we probably pitied 7 one another.

She, for the lack of structure in my life, the erasure of Indianness, the absence of an unvarying daily core. I, for the narrowness of her perspective, her uninvolvement with the mythic depths or the superficial pop culture of this society. But, now, with the scapegoatings of “aliens” (documented or illegal) on the increase, and the targeting of long term legal immigrants like Mira for new scrutiny and new self-consciousness, she and I find ourselves unable to maintain the same polite discretion. We were always unacknowledged adversaries, and we are now, more than ever, sisters.

“I feel used,” Mira raged on the phone the other night. “I feel manipulated and discarded. This 8 is such an unfair way to treat a person who was invited to stay and work here because of her talent. My employer went to the LN. S. and petitioned for the labor certification. For over 30 years, I’ve invested my creativity and professional skills into the improvement of this country’s preschool system. I’ve obeyed all the rules, I’ve paid my taxes, I love my work, I love my students, I love the friends I’ve made. How dare America now change its rules in midstream?

If America wants to make new rules curtailing benefits of legal immigrants, they should apply only to immigrants who arrive after those rules are already in place. ” To my ears, it sounded like the description of a long-enduring, comfortable yet loveless 9 marriage, without risk or recklessness. Have we the right to demand, and to expect, that we be loved? (That, to me, is the subtext of the arguments by immigration advocates. ) My sister is an expatriate, professionally generous and creative, socially courteous and gracious, and that’s as far as her Americanization can go. She is here to maintain an identity, not to transform it.

I asked her if she would follow the example of others who have decided to become citizens 10 because of the anti-immigration bills in Congress. And here, she surprised me. “If America wants to play the manipulative game, I’ll play it, too,” she snapped. “I’ll become a U. S. citizen for now, then change back to India when I’m ready to go home. I feel some kind of irrational attachment to India that I don’t to America. Until all this hysteria against legal immigrants, I was totally happy. Having my green card meant I could visit any place in the world I wanted to and then come back to a job that’s satisfying and that I do very well. “

In one family, from two sisters alike as peas in a pod, there could not be a wider divergence of 11 immigrant experience. America spoke to me-I married it-I embraced the demotion from expatriate aristocrat to immigrant nobody, surrendering those thousands of years of “pure culture,” the saris, the delightfully accented English. She retained them all. Which of us is the freak? Mira’s voice, I realize, is the voice not just of the immigrant South Asian community but of 12 an immigrant community of the millions who have stayed rooted in one job, one city, one house, one ancestral culture, one cuisine, for the entirety of their productive years.

She speaks for greater numbers than I possibly can. Only the fluency of her English and the anger, rather than fear, born of confidence from her education, differentiate her from the seamstresses, the domestics, the technicians, the shop owners, the millions of hard-working but effectively silenced documented immigrants as well as their less fortunate “illegal” brothers and sisters. Nearly 20 years ago, when I was living in my husband’s ancestral homeland of Canada, I was 13 always well-employed but never allowed to feel part of the local Quebec or larger Canadian society.

Then, through a Green Paper that invited a national referendum on the unwanted side effects of “nontraditional” immigration, the government officially turned against its immigrant communities, particularly those from South Asia. I felt then the same sense of betrayal that Mira feels now. I will never forget the pain of that 14 sudden turning, and the casual racist outbursts the Green Paper elicited. That sense of betrayal had its desired effect and drove me, and thousands like me, from the country.

Mira and I differ, however, in the ways in which we hope to interact with the country that we 15 have chosen to live in. She is happier to live in America as expatriate Indian than as an immigrant American. I need to feel like a part of the community I have adopted (as I tried to feel in Canada as well). I need to put roots down, to vote and make the difference that I can. The price that the immigrant willingly pays, and that the exile avoids, is the trauma of self-transformation.

Two Ways to Belong in America. (2016, Jul 26). Retrieved from https://studymoose.com/two-ways-to-belong-in-america-2-essay 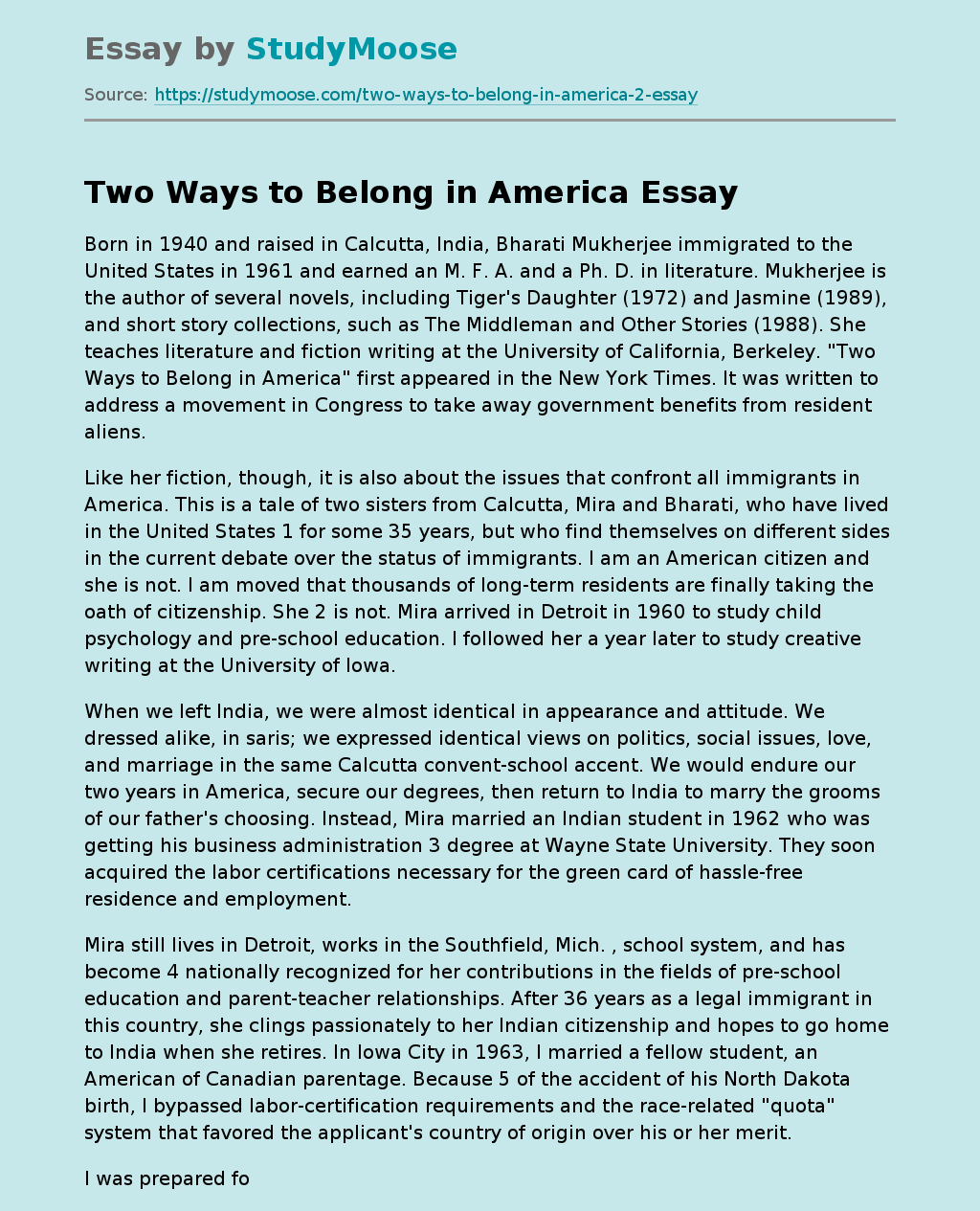