Differences of Private and Public Language

“I remember to start with that day in Sacramento when I first entered a classroom, able to understand some fifty stray English words” (Rodriguez 535). Richard Rodriguez, who is the author of the essay “Private Language, Public Language”, introduces how he was raised and lived as well as how he felt growing up in the States as an immigrant family. After reading the Rodriguez’s essay, there are several points as well as the experiences that I was able to relate, perhaps because I share a similar background as the writer himself.

Don't use plagiarized sources. Get your custom essay on
“ Differences of Private and Public Language ”
Get custom paper
NEW! smart matching with writer

Language as he says is separated by “Just opening or closing the screen door” (Rodriguez 537), the differences were simple as being home speaking his own language and staying within the world of the gringos, or white English speaking person. He also explains the differences on how Rodriguez expressed Spanish as a private language and English as a public language, and what those two languages meant to him emotionally as well as mentally.

Rodriguez expresses his emotional feeling as he entered the classroom and heard the nun call out his name in English for the first time. “Quickly I turned to see my mother’s face dissolve in a watery blur behind the pebbled glass door” (Rodriguez 535). Being in a different environment and without anyone to rely on he was feeling confused and scared, and even seeing his mother with in a watery eyes did not give him any more comfort to begin with.

Rodriguez was also very sensitive to the sounds.

“I heard her sound out: Rich-heard Road-ree-guess” (Rodriguez 535). He was not used to the soft spoken sounds of the words especially with his name. Hearing his name spoken out in English made him even more feel like an outsider that did not belong with the crowd.

Another characteristic can be not having sense of belonging to the society. “We lived among gringos and only a block from the biggest, whitest houses” (Rodriguez 535). Although his family had a pride for being hard working family and being able to cope with in America, his family never felt welcome by the neighbors as well. His personality also changes when he is in public with stranger, which is a non-family member. “Walking down the sidewalk, under the canopy of talk trees, I’d warily notice the suddenly silent neighborhood kids who stood warily watching me” (Rodriguez 537).

Rodriguez was not the only one who did not have the confidence and felt comfortable in English. “In public, my father and mother spoke hesitant, accented, not always grammatical English” (Rodriguez 536). They were not ashamed of where they came from but because they were well aware of the fact that they did not sound like gringos. Their voice and the tones were lower compared to when they spoke in Spanish. “I was unable to hear my own sounds, but I know very well that I spoke English poorly” (Rodriguez 536).

He was never too embarrassed about how his parents did not speak English fluently because they went about with their life very well and coped with their issues on their own. However, he could not hide the fact that he got nervous when he was at presence with his father. “Hearing them, I’d grow nervous, my clutching trust in their protection and power weakened” (Rodriguez, 537). “The very first chance that I got, I evaded his grasp and ran on ahead into the dark, skipping with feigned boyish exuberance” (Rodriguez 537).

On the other hand, the situation completely changes when his family is at home and being able to express their feelings and thought in their own language. “Spanish seemed to me the language of home. It became the language of joyful return” (Rodriguez 537). He also felt loved and made him feel like he was valued. “My parents would say something to me and I would feel embraced by the sounds of their words” (Rodriguez 537). Regardless of location and the times, whenever he encounters and hears the private language, the Spanish, he expresses how he feels close to home and finds himself at ease. “Spanish speakers, rather seemed related to me, for I sensed that we shared – through our language-the experience of feeling apart from los gringos” (Rodriguez 537).

Overall, after reading Rodriguez essay, I was able to relate and understand every aspect of the points. I grew up in the States forced to learn English just like Rodriguez had to in his childhood. I was able to connect with the fear he had, the feeling of being an outsider, and not being able to find comfort with the surrounding. Rodriguez referred Spanish as a private language due to the fact that Spanish was spoken only at home and only his kind of people, which are gringos can understand. On the other hand, English was referred as public language not only because he was forced to speak in order to go about his daily routine and able to blend in with others but also every non gringos spoke English. However, as he reached his adulthood he found comfort with his background, his ancestors and learned to appreciate the multicultural experiences. Rodriguez states in his essay, drawing a complete line between private and public language is not a healthy thought to have, but being proud of having the opportunity to understand two different cultures is a great gain after all.

Differences of Private and Public Language. (2016, May 08). Retrieved from http://studymoose.com/differences-of-private-and-public-language-essay 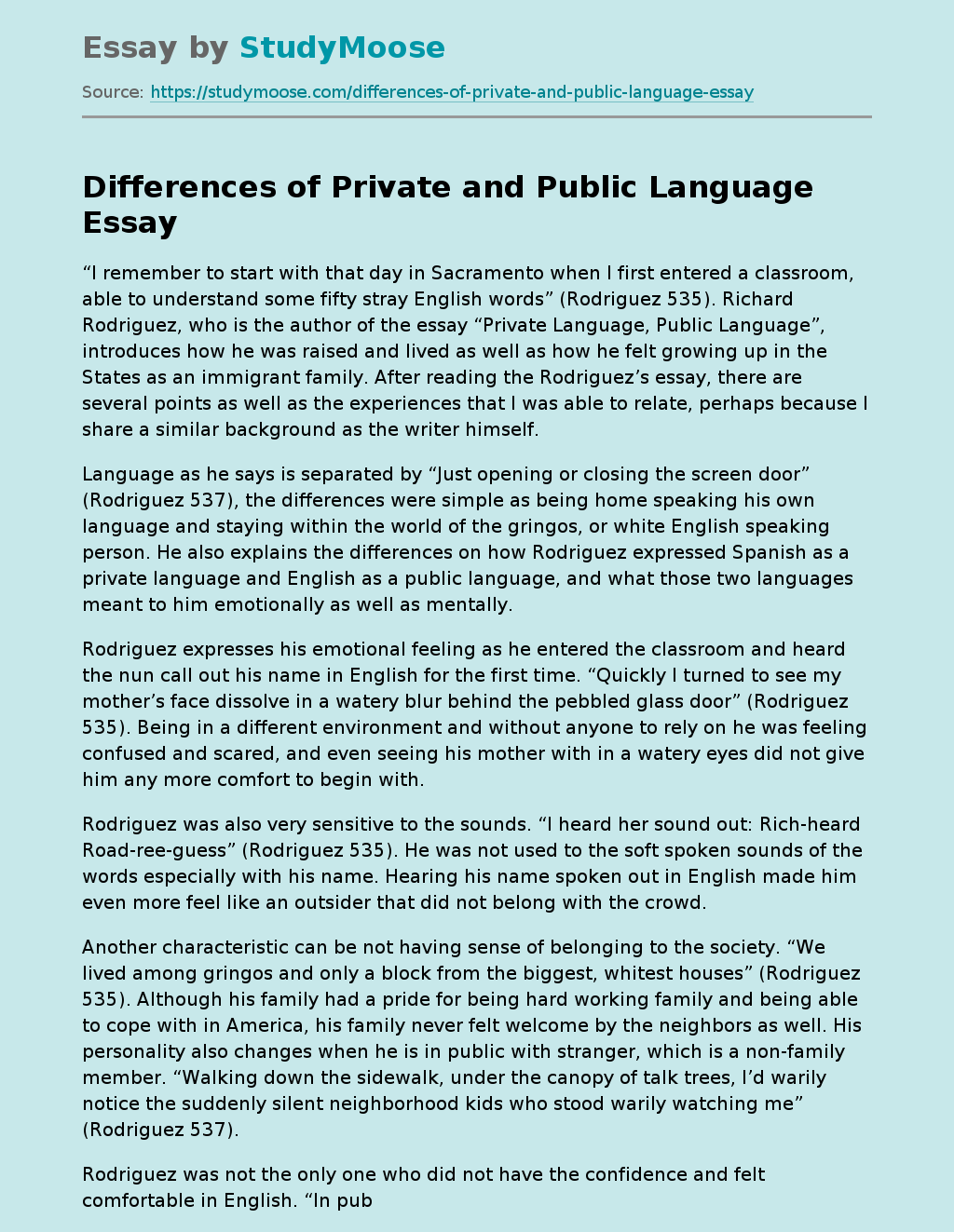