In this modern age, it is normal to find families that have two careers.  Careers are important to a family because these serve as the main source of financial support for the maintenance of a household.  Salaries earned from working provide for the payment of bills, as well as provide support for the basic needs for food, shelter and clothing.  There are two possible family settings in terms of careers in the family: a two-career family, wherein both parents are working, and a one-career family which has only one parent working, either the father or the mother.

These two settings have similarities and differences, depending on what angle is considered.

Both families also give importance to spending time with the entire family, knowing that quality time with the children is not enough now in this modern age, but that quantity is also of equal importance.

On the other hand, two-career families generally have less time to spend with their children, because both are working during the day, and they come home tired and weary and have little energy left to tend to their growing children.  Some children from two-career families tend to spend time with friends because their parents are not at home to keep them company, and sadly, this may be a root cause for acquiring bad habits such as smoking and drugs.  Unfortunately, there are also some parents who unconsciously bring home the stress of the workplace, which affects their interactions with their children.

One-career families usually have the mother staying at home, and this is very beneficial to the children because they will always have someone to can go to once they reach home after school.  Homemakers have unlimited time to help their children with their homework and studies and other after-school activities, and it is also beneficial to the entire household if there is someone based in the house who is ready to provide food to members of the household who come home and are very hungry and tired.  However, there is also an unwritten hierarchy in a one-career family, and that is—the working parent is known as the breadwinner or the head of the household, and the other parent who stays at home is not considered to be of authority because he/she is not earning any money.

In this setting, the working parent appears to be the dominant person in the family, and he/she shows self-esteem over the non-working parent (Burke and Weir, 1976).  It is sad to know that some families have such structure, because it is actually also a full-time job to maintain a home, even harder to do than to work in an office.  In two-career families, both parents are regarded with equal authority and dominance, because both parents are earning for the family.  At the same time, both parents have self-esteem and regard themselves as achievers, as well as good providers.

Two-career and one-career family settings have both advantages and disadvantages.  The choice of career setting is based on each family’s needs and conditions.  If both parents feel that the family will have harmony if both are working, then they maintain such setting.  Or if the children are old enough and need not much supervision, a two-career setting is feasible.  However, if there is a child who is always sick or is disabled, a one-career family will be advantageous to this particular setting, so that the child can be well taken care of.  It is important to know that the number of careers in a family is generally a result of the family’s current needs and situation. 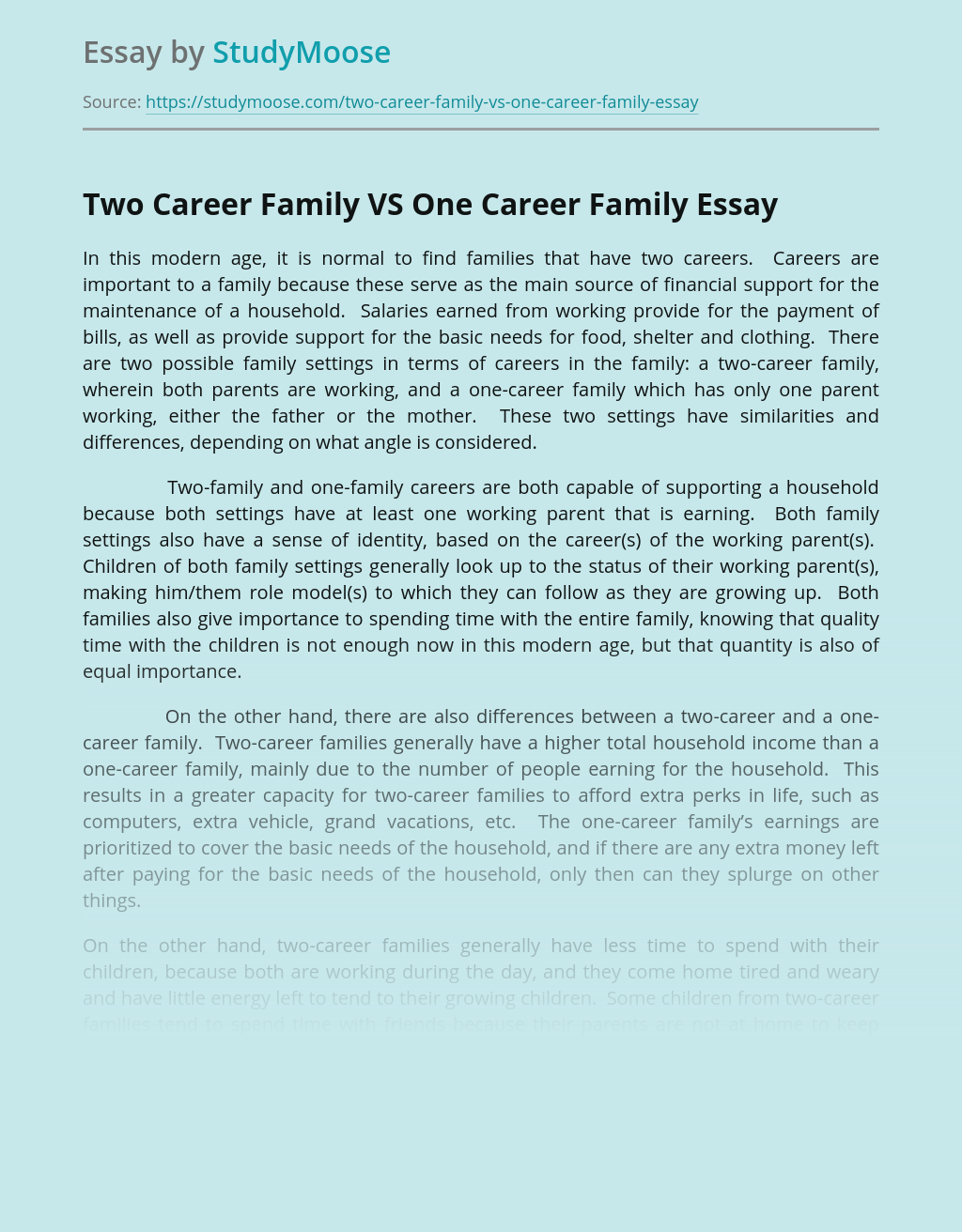 A career defines who I am and what am I all about. It is true that a majority of people will choose to work for what pays and offers them the most, especially living in today’s economy. However, I believe that my chosen career path should base on the source of my passion and interest...

My name is Doris Veshi. I would hereby like to present my application for the position of a physician assistant, as the most suitable candidate.  I aim at working for an organization where personal growth is encouraged, human values are nurtured and talents are utilized in the attainment of organizational goals. I would like to...

One career that I am interested in is an Account Executive in Advertising. Tasks for such a job include: planning ads for businesses, picking the best way to advertise, meeting with artists to plan ads and show plans to customers. Other qualities are figuring out the costs of ads, working with budgets, layouts, computers, and...

Everyone has a dream about future. The picture coming to my mind about my future is so fantastic. I dress up in a professional way and go to my own office in a big company. I am an accounting manager of the company whose employees have paid vacations and many other benefits as well. This...

View sample
Role of a counsellor

Counsellors help people to explore feelings and emotions that are often related to their experiences. This allows their clients to reflect on what is happening to them and consider alternative ways of doing things. Counsellors work in a confidential setting and listen attentively to their clients. They offer them the time, empathy and respect they...