This paper seeks to take a stance for or against the adoption of Donald Trump’s proposal on building a US-Mexico barrier by using logic, and evidence. Facts, figures and evidence for this paper are obtained through research from credible sources, which are listen in the works cited page. This paper is limited to undocumented immigration from Mexico into the United States of America. The reason this research is important, is because of its relevancy in our current day and age.

Don't use plagiarized sources. Get your custom essay on
“ Trends, Problems, and Effects on Donald Trump’s Proposal on Building a U.S – Mexico Barrier ”
Get custom paper
NEW! smart matching with writer

Building a barrier between the United States and Mexico will forever change not only the United States, but also Mexico as we know it today. Donald Trump’s Policy on building a US-Mexico barrier is intended to reduce undocumented immigration, as well as reducing the illegal importation of drugs. Some people argue that this is necessary to protect the United States of America, while others argue that it is unconstitutional, and just costs a lot of money. Through this research, we found that there is a drastic increase in apprehensions at the southwest border, which helped spark the idea of building a U.

Lastly, it may not significantly reduce undocumented immigration, as visa overstays have outnumber undocumented border crossers by half a million. Based on the evidence obtained, we conclude that Donald Trump’s policy on building a U.S – Mexico barrier should not be adopted, as it does not provide the best return on investment for taxpayers, since it will not necessarily solve the problem it intends on solving.

Donald Trump’s proposal on building a US-Mexico barrier not only demonstrates problems in regards to constitutionality, it also costs a lot of money, and has a major effect on humans, the economy, the crime rate, and the environment. In this paper, we will address the question on whether Donald Trump’s proposal on building a U.S-Mexico barrier should be adopted or not. We will use facts and data, as well as logic, in order to come to a conclusion, rather than relying on emotions, or feelings.

First, we will discuss the current undocumented immigration trends. We will specifically look at the statistics, which include the most recently available data about border apprehensions. In addition to that, we will look at changes in policies such as DACA, as well as the zero-tolerance policy.

Secondly, we will discuss the effects of a U.S – Mexico barrier on humans, especially the ones that live at or close to the border. The economy, and how current undocumented Mexican workers contribute to social security. Crime, how drug cartels smuggle drugs into the U.S. And the environment, in particular, we will look at how building a U.S – Mexico barrier could potentially interfere with native American land, as well as protected wildlife.

Thirdly, we will look at the problems associated with building a U.S – Mexico barrier. We will focus on issues revolving around the constitutionality, whether it is okay for us to divide a native tribe that resides at the border. We will also look at the associated costs. Does it maximize the return on investment for taxpayers? And we will ask ourselves the question whether it actually solves the problem that the U.S – Mexico barrier intends on solving.

Lastly, we will conclude this paper by making a decision on whether or not the U.S – Mexico barrier should be built. For that decision, we will rely on all the information gathered for the sake of this research paper.

Apart from the increase in border apprehensions, we have also seen an overall trend of policies specifically designed to address immigration from Mexico to the United States. The first, and most important one being the Deferred Action for Childhood Arrivals (DACA). The program provides protection from removal and work authorization to unauthorized individuals who were brought to the United States as children. Donald Trump is working on ending this program. Even though the litigation is still going on, it has already caused a tremendous amount of distress to many undocumented immigrants from Mexico. I have seen protests at UCLA first hand, and was quite impressed to see how everyone got together at an educational institution to protest against the ending of this program. In addition to the potential end of DACA, there has been a newly implemented “Zero-Tolerance Policy”. It was officially announced on April 7, 2018 by Attorney General Jeff Sessions. During the announcement, General Jeff Sessions said that the Justice Department would prosecute everyone that the U.S. Customs and Border Protection (CBP) apprehends when crossing the border illegally, without exception.

Effects of a US-Mexico Barrier

A U.S – Mexico wall will have a direct impact on humans that live close to where the wall will be built, but it will also have an indirect impact on humans that plan on crossing the border. It will make it harder for “coyotes” to cross the border illegally which is great as that is what the wall is intended for, but it will also disturb all the humans that live on the land on which the wall is planned to be built on. There will be huge machines, and a lot of noise and pollution. In addition to that, there is the psychological aspect of feeling rejected, almost as if your neighbor was to build a huge fence on the border between his lawn and yours.

Building a U.S – Mexico barrier will definitely have direct, as well as indirect impacts on the U.S economy. One of the most important things to know is that undocumented workers from Mexico pay into social security in the United States. They do so even though it may ultimately not benefit them directly. These payments into social security will disappear as the number of undocumented immigrants decreases.

Problems with the US-Mexico Barrier

Issues revolving around the constitutionality of building a U.S – Mexico barrier arise from the funding process, as well as the acquisition of land from native American nations, specifically from members of the Tohono O’odham Nation who own 62 miles of border land in Texas. The Tohono O’odham tribe is federally recognized, and they even have their own constitution. During the Gadsden Purchase, the United States paid Mexico $10 million for 29,670 square miles of land. As a result, the tribe’s territory was split in half. As a result of building a barrier, the Tribe may be split once again, and their nation may dissolve. In addition to that, there is the issue of separation of powers. During the funding process for building the U.S – Mexico barrier, Donald Trump declared a national emergency in order to proceed with building the wall, even though congress refused to approve the funds. Because of this incident, there are discussions about restricting the president’s power to declare national emergencies.

This section merely focuses on the monetary cost of building and maintaining a wall. It does not take into consideration the cost for humans, the environment, and the economy. Those will be discussed in Chapter 5. Effects of a US-Mexico Barrier.

During the election campaign, candidate Trump claimed that the wall would cost only $12 billion. However, according to a leaked Department of Homeland Security report, the wall will cost $21.6 billion. This includes the cost for the material, the labor, as well as the land acquisition. The process of building the wall is still in early stages, so there has not been an official cost breakdown released yet. Since the numbers have changed in the past, we can expect them to change in the future, as big projects like these tend to come with unexpected costs.

Does it Solve the Problem?

The goals of U.S Mexico Barrier are multifold. However, the primary reason for building the U.S – Mexico barrier is to reduce undocumented immigration as well as the importation of drugs from Mexico. According to a study done by the center for migration2 visa overstays have outnumbered border crossers by half a million. This indicates that a U.S – Mexico barrier may prevent further undocumented immigrants from entering the United States, but not necessarily solve the problem of reducing existing undocumented immigrants. In addition to that, the center for migration Studies has reported on the dramatic decline in the US undocumented population between 2008 and 2014 (Warren 2016). This indicates that the undocumented population is decreasing already. Building a wall may not necessarily facilitate that process further.

Another problem that may not necessarily be solved by building a barrier is the importation of drugs. According to CBP Enforcement Statistics (FY 2019) most drugs smuggled into the United States come through legal ports of entry. The report states that “Drugs smuggled into the United States by Mexican DTOs usually are transported in private or commercial vehicles however, Mexican DTOs also use cross-border tunnels, subterranean passageways, and low flying small or ultralight aircraft to move drugs from Mexico into the United States.” As mentioned in the report, drug trafficking organizations also like to utilize tunnels. Building a barrier will not prevent drug trafficking organizations from continuing to smuggle drugs through underground tunnels, as the wall does not go deep enough. Based on the evidence collected, we can conclude that the primary problems which are supposed to be solved by building a U.S – Mexico barrier won’t actually be solved.

What we found is that Donald Trump’s proposal on building a US-Mexico barrier not only demonstrates problems in regards to constitutionality, it also costs a lot of money, and has a major effect on humans, the economy, the crime rate, and the environment.

First, we looked at the trends of undocumented immigration. By looking at the statistics we found out that there is a severe increase in apprehensions at the southwest border. This confirmed the hypothesis that undocumented immigration is increasingly becoming a problem that needs attention. We also looked at the change in policies and found that there are efforts being made to stop the Deferred Action for Childhood Arrivals (DACA) program, which is currently still being processed. There is a zero-tolerance policy that was implemented, which states that the Justice Department would prosecute everyone that the U.S. Customs and Border Protection (CBP) apprehends when crossing the border illegally, without exception.

Secondly, we looked at the effects of a U.S – Mexico barrier which demonstrated severe problems in regards to the environment, humans, the economy, and crime.

Last, and most importantly, we asked the question on whether a U.S – Mexico barrier would solve the problem it intends on solving. It turns out that a U.S – Mexico barrier would not do a very good job at solving the problem of undocumented immigration because visa overstays exceed illegal border crossing by far, and reducing the illegal importation of drugs into the United States won’t work because they are transported through legal ports of entry as well as tunnels. 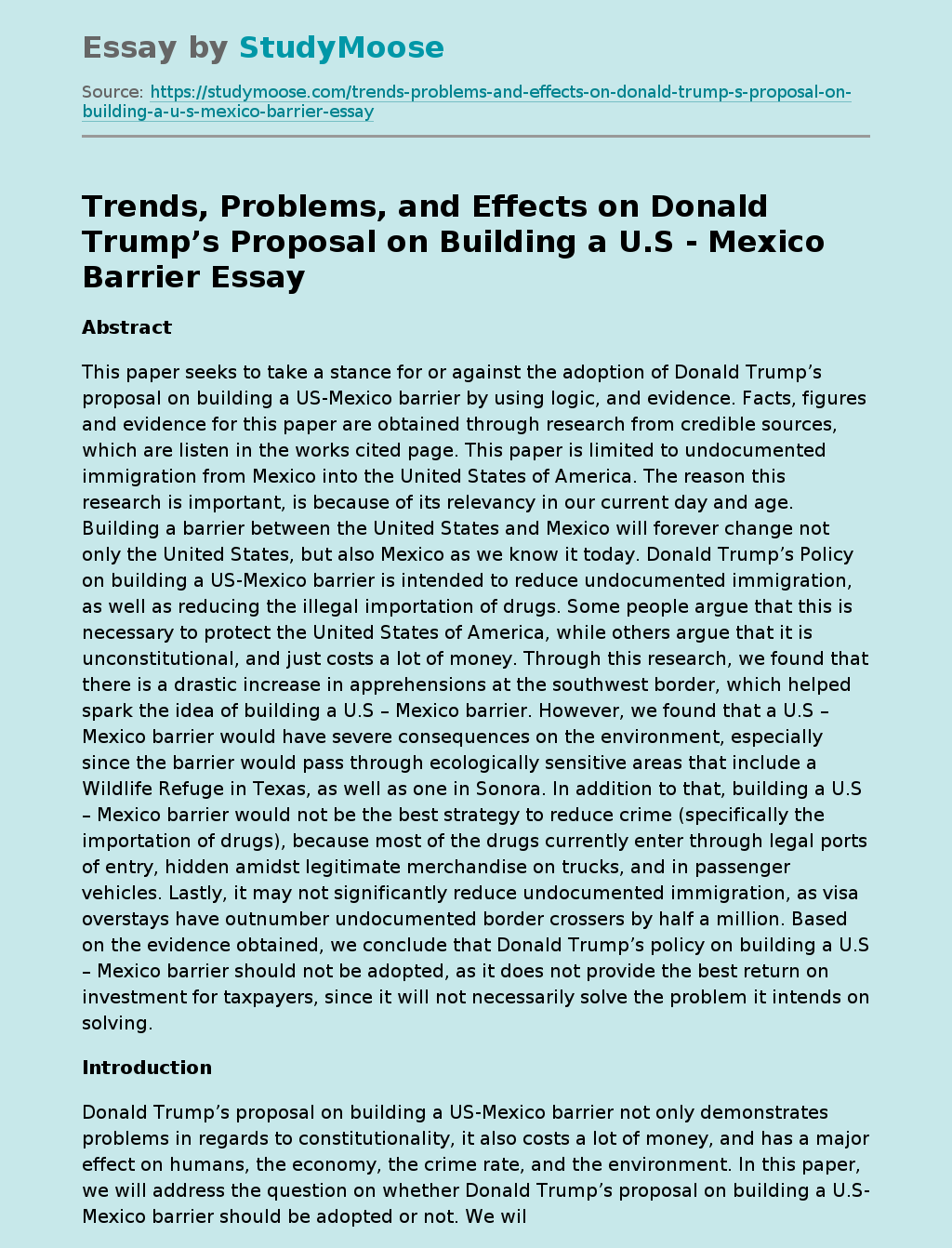