The Day Of The Dead In Mexico

“Every Mexican is closely acquainted with death, jokes about it, caresses for it, sleeps with it, celebrates it,” – said the Mexican poet Octavio Paz (Kuhn. 2006).

Day of the Dead (Spanish: Día de los Muertos) is a holiday, festival which is dedicated to the memory of the dead people, and is held on the 1st -2nd of November in Mexico. There is a belief that the souls of dead people come to their relatives` homes these days (Williams, 1998).

The origin of the holiday goes back to the tribes of Maya, Purépech, Naun and Totonac.

Don't use plagiarized sources. Get your custom essay on
“ The Day Of The Dead In Mexico ”
Get custom paper
NEW! smart matching with writer

These people had been praising the dead during more than 3 thousand of years.

The Aztecs considered that the death was more important than the life. The life was worth of nothing, and they believed that leaving, a man was going through the nine lower worlds in Miktlan, which is the shelter of the dead people. No matter how people lived, it is important how they were dying; it influenced their fate in the netherworld.

It is also said that the Day of the Dead was brought to Mexico by Spanish people. But the Catholic Church is not able to eradicate pagan holidays till the end. Day of the Dead is a dangerous mix of Christian traditions of the conquerors and the ancient Aztec customs.

Talking about the history of this holiday, it is necessary to mention that the life for the inhabitants of ancient Mexico was just a moment. Death was waking dreams in the present, in order to enter the world of the dead and appear in front of the other gods, depending on the type of case, which took away their lives.

Those who have been sacrificed or died in a result of the war, went to the sun after death, the same fate awaited the women who died, giving life to the child. Those who have drowned found themselves in paradise (Smith, 2005).

The souls of the dead children were regarded as precious, that’s why they stayed in the house; the soul that was not chosen by God was left in the underworld. In order to help souls to travel from this world into the world of the dead, without delay, people who died were buried or burned, along with things, food, a dog as a companion and water for the road.

In the sixteenth century, when the conquest and colonization began, the widespread dissemination of the Catholic religion also started. People were afraid of death and hell that time.

But in the eighteenth century, two types of attitude toward death were intertwined in a single cult. Skeletons and bones appeared again, but with a festive and the comic mood, in addition, the Catholic symbols appeared in the local crafts and foods. Now it is a popular holiday, which involves all segments of society.

It is believed, the souls of the dead people return to the world of alive in order once again to see their families for two days. Houses in these days look like the crypts, but the graves are decorated with flowers and ribbons, and all the relatives and friends come to honor the memory of dead people. And in order their souls which are returning to earth in the form of butterflies or hummingbirds don’t get lost, candles are lit everywhere, pointing them the way home (Verti, 1993).

The holiday gathers the friends and family together in order to remember and pray for those have already died. The cult of the dead was very important for Indian tribes, which are why nowadays ceremonies, rituals and traditions come from that time. One of the mysteries of the holiday is the altar, which is traditionally built on October 31. The Aztecs believed that the dead are returning home in order to take the necessary things for the journey to the world of the dead: el Mictlon. Now to build the altar is an unusual way to show the deceased relatives, friends, that they are remembered and loved.

Each component of the altar has a special meaning. The altar stands on a table covered with an embroidered cloth. The most important component is the bread which has the shape of the human body and has the name of the deceased. The bread is surrounded by orange flowers of calendula, symbolizing the sadness. Candles should be burning around the altar (each of them gets the name of the deceased). In some homes the road from the entrance door to the altar is sprinkled with petals of calendula, in order the deceased not to get lost. On the 1st of November Mexicans go out, meet friends, and then have dinner at home, telling funny stories.

Usual altar, which Mexicans have on The Day of Dead has such things as: calaveras, fruit, nuts, candles, bread of dead, alcohol, cigarettes, papel picada (perforated paper) and a lot of petals of flowers (Conklin, 2001).

And on the 2nd of November people bring rice with milk, sweets, tequila, cigarettes and coffee to altar. The bottom of the altar is decorated with pumpkins and rolls of various shapes and colors. Sometimes the part of the altar, is carried to the grave of the deceasedâ€¦ decorating tracks of cemetery with candles. In those days, people treat each other on behalf of the deceased, in the hope that in the future the deceased will help in a difficult moment.

The first day of the holiday is called “Día de los Angelitos” (Day of angels) and is dedicated to the commemoration of little children. For adults is meant to be the second day; which is in fact, the Day of the Dead. All major events and celebrations are on the second day. It is the day when street marches, especially in small towns and villages are arranged. The way of the celebration can be very different: in some areas of the country the residents organize sad solemn torch procession, the type of funeral, while others prefer the burlesque fun, bright colors, dances and songs. Usually people dress up as skeletons and at night the whole country under the light of torches rushes to the graves of relatives, taking traditional tequila, favorite food of the deceased and sugar skulls with the names of dead people on forehead. In the night, it looks like a fiery river flows in the direction of the cemetery. At cemeteries people drink, eat, and dance (Greenleigh, 1998).

On the Day of the Dead it is common to write humorous epitaphs and draw caricatures of the deceased. Thus, during the holiday people can buy sugar and chocolate skulls of all sizes, marzipan coffins, skeletons and marmalade in every shop.

Women bake cakes and donuts with the pattern of bones, the crosses of the dough, and other decorations for the altar, for the picnic at the cemetery.

The Day of the Dead is the most popular holiday in Mexico. Mexicans` attitude to the death is not usual; it is not tragic, but joyous day for meeting with those who were dear for them. It is not a tragic holiday, but triumphant festival, with the colorful costumed procession and the music. This holiday is so significant, unusual, and colorful, that in 2003, “it was declared the heritage of mankind by UNESCO” (Kuhn, 2006).

It is very beautiful and interesting to walk at Mexican cemetery at the Day of Dead. Every grave is a peace of art, which can form an idea about the dead person: whether he was a carpenter, or a watchmakerâ€¦

There is a small building at every cemetery, which looks like a room with a hole in the ceiling. This is a special place which people use in order to talk to dead people. If someone has something important to tell to the dead people, he can go into this room and whisper his important information. And if the teller is sincere, then he will be always heard by the deceased person.

There is a need to say that while celebration, people cook sweets in the form of skulls, make special figurines of dressed female skeletons Katrina (Spanish: La Calavera de la Catrina). In 2004 the students of the National Autonomous University of Mexico, built a wall from 5,667 sugar, chocolate and caramel skulls, which is 2,667 skulls more than the former wall. The wall has become one of the records from the Guinness Book of Records (Brandes, 2006).

Mexicans have very specific attitude to death, that is why their holiday Day of the Dead is one of the best and popular holidays in their culture. As famous Mexican poet Octavio Paz wrote: “Fearless Mexican doesn’t feel confused when death comes, he is ready to move forward it, to teas, tempt it, squeeze it in his arms, lie down with it in bed; it is his favorite toy and the last love.”

Greenleigh, John., Beimler, Rosalind Rosoff. The days of the dead: Mexico’s Festival of Communion with the Departed. (1998). p. 56.

The Day Of The Dead In Mexico. (2019, Aug 19). Retrieved from https://studymoose.com/the-day-of-the-dead-in-mexico-essay 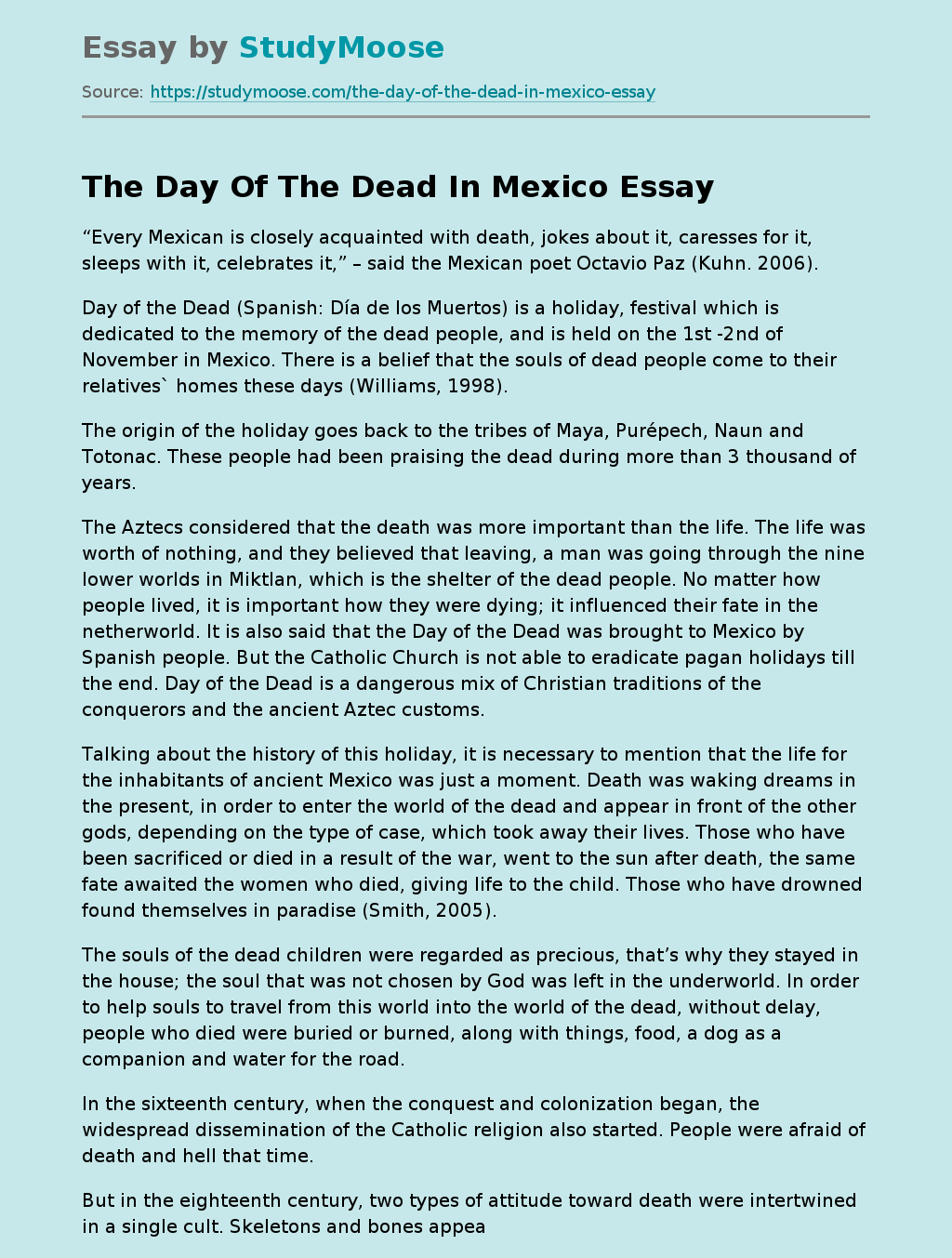