Gran Torino starring Clint Eastwood was about a man’s struggle in adapting to the changes in his environment when confronted by unfamiliar exposure to cultural differences. The film was chosen because it told a story about one’s struggle with traditional practice, cultural diversity, gender roles, and the acceptance of others. In terms of culture, there was an abundance of traditional practices related to the Hmong community. The screenplay was written by Nick Schenk and the movie was filmed in July 2008 (Longwell, T).

Don’t waste time
Get a verified expert to help you with Transcultural Analysis of Relationship in Gran Torino
Hire verified expert
$35.80 for a 2-page paper

Gran Torino was directed and produced by Clint Eastwood, who also played the role of the main character known as Walt Kowalski. Walt was an American man and a Korean War veteran who resided in a neighborhood that became inhabited by Hmong families (Gran Torino, 2008). The relationship that Walt had with his own family was disconnected and distant because his sons embraced the modern way of living but Walt was more traditional. Walt was portrayed as a grumpy old man who did not like to socialize with others.

All of that changed when Walt became associated with the Hmong children next door, Thao and Sue. Walt saved Thao from being taken by the Hmong gang members and was viewed as a hero by the Hmong families despite the fact that Walt was just trying to keep other people off his lawn. Upon an unexpected invitation by Sue, Walt’s world became intertwined with the Hmong community as he was introduced to various traditional Hmong customs and foods.

After a series of events, the Hmong gang returned and injured Thao’s family which prompted Walt to seek redemption from his war past by sacrificing himself for the safety of Thao and Sue. The film portrayed culture clashes between an American and Hmong families while focusing on the struggles that Hmong immigrants endure to survive within their community.

The Hmong population was great in Minneapolis, Minnesota and it was the original setting of Gran Torino and also the home town of screenplay writer Nick Schenk (Longwell). Schenk had never written any other featured films prior to Gran Torino and it was his first recognized piece. In the early 90s, Schenk worked at a factory where many of his co-workers were Hmong and he gained some knowledge about the history of Hmong people (Longwell). The Hmong sided with the U.S during the Vietnam War but ended up in refugee camps due to communist takeover after the U.S. troops left, which resulted in the Hmong fleeing to the U.S. to escape from the communist forces (Gran Torino, 2008). Schenk began to incorporate Hmong families into the story with a Korean War veteran to emphasize a clash of cultures. The intended purpose of this film was to express the cultural barriers in the language, customs, and gender roles between Hmong people and Americans.

The writers and directors did a great job on portraying masculinity as the perceived dominant role between the characters. In Gran Torino, Walt criticized Thao for doing things that men are not supposed to do such as gardening. Thao does a good job in representing role reversal because he was proud to do women chores like washing the dishes and gardening. Walt tried his best to look after Thao and made Thao masculine by teaching him how to talk to other “real” men. Walt believed that real American men are supposed to be strong, fight for themselves, pay taxes, and work hard at a hands-on laboring job. Walt eventually helped Thao become a man by getting him a “real” job, tools for construction work, and social skills to interact with other men. This film was derived from Schenk’s prior experience as a factory worker with other Hmong people and this writer did not create any other significant work subsequent to the production of Gran Torino. The plot of the movie was to show how two different types of culture collide and interact. In addition, there was also indication that masculinity in males was important as shown by the main character, Walt. The sub-plot was to show the viewers that men are not supposed to be barbaric but to become a sophisticated people with class and follow society’s rule.

The main characters were Walt Kowalski, Spider, Thao, and Thao’s older sister, Sue. Walt played the dominating male that represented how a real man should be. Spider, Thao and Sue’s cousin, represented an antagonist barbaric villain that supposed to be a gangster whom terrorized Walt’s neighborhood. Thao played an innocent feminine teenage role that Walt believed was not masculine, but has class and self-respect. Sue played the smart, sophisticated, typical school Asian girl who ended up getting injured by her cousin, Spider, and his gang. It was through the interaction with Sue and Walt that the viewers were able to experience Hmong history and cultural customs. In one of the scenes during a car ride home, Sue explained to Walt the origin of Hmong people and she also invited him to her house for meal where Walt thoroughly enjoyed the foods of Hmong culture. Walt and Spider treated Thao like a child because they both wanted to teach Thao how to become a man. Spider taught Thao that he needed to become a barbaric person to become a “real” man, while Walt taught Thao that hard work and following society norms was what a “real” man should do. Sue was the only main female character that was able to change Walt’s mind about Hmong people.

Because of Sue’s persistence, Walt decided to help her and her family from Spider and his gang. Walt became the protagonist at the end of the movie by risking his own life to bring down Spider and his gang and restoring peace to the community. My opinion about the film was that the director did a good job on portraying masculinity and how a real man should act and treat a woman. There were a lot of racism coming out of Walt’s mouth about Asians, but in the end, I believed he had a change of heart about his Hmong neighbors. I believe he came to realizations that not all Asians are the same as he remembered during his Korean War days. The way Walt finally gave a confession to the priest and how he died for his neighbor was really unexpected. The acting of Walt’s character by Clint Eastwood was really good as well. Walt’s character caught my attention and made me want to know more about his previous life, especially when he talked about how he was in the Korean War. The cinematography could have been better and at times, it felt like I was watching a biography rather than a movie.

One of the flaws was that Walt did not get in a fight for his rude behavior towards everyone that he encountered. Another flaw was that he sacrificed his life for a neighbor when he knew that he could have called the cops on Spider and his crew for possession of a fire arm and shooting his neighbor’s house, rather than choosing death at the end. Also, I believed the movie could have been better if they left out his illness from the doctor’s visit. If they had left that out and continued with the suicidal death in the end rather than risking Walt’s life because of a terminal illness, Walt’s character would have been more heroic. On the contrary, a strength of the movie was when Sue corrected Walt about the pronunciation of her race while giving him a history of where Hmong people came from and why they immigrated to America. The ultimate strength was when Walt died for his neighbor by going to Spider’s apartment complex with witnesses around to see him get murdered. Throughout the movie, the film showed the audience that Walt always carried a gun to scare off his foes, but at the end, he realized that he did not need a weapon to bring down Spider and his gang. One of the things that I
learned from the film was that nurses should not be too quick to judge someone based on appearance, like how Walt called all the Asians “gooks” without knowing their nationality.

In one of the scenes in the movie, Walt was in the waiting room at the hospital for a check-up and a nurse mispronounced his name. The nurse called him “Koski” while his name was “Kowalski.” Walt gave her a disgusting look and the nurse did not apologize or asked if she was mispronouncing his name or not. As a future nurse, I want to maintain a professional role and acknowledge patients by their correct name. Correctly pronouncing a patient’s name also eliminates human error and also prevents doctors from diagnosing the wrong person. In conclusion, I would recommend this movie to people who are uneducated about Asian culture. There were a lot of racist terms that Walt used in the movie about Asians and the stereotypes of Asians eating dogs which are not true. I would rate the movie a 4 out of 5 stars because the movie was rich in cultural content and character development. The film is appropriate for audiences ages 13 and up and mainly geared toward males. There were a lot of violent content and gang related terms involved. As a result of watching this movie, I learned that one can change if surrounded by the right people under inevitable circumstances such as Walt’s culture clash with his Hmong neighbors. In addition, helping one another was the most rewarding take home message of Gran Torino. Whether I am helping a patient or just lending a helping hand to my next door neighbor, I will remember to be kind as to prevent one another from going down the wrong paths. 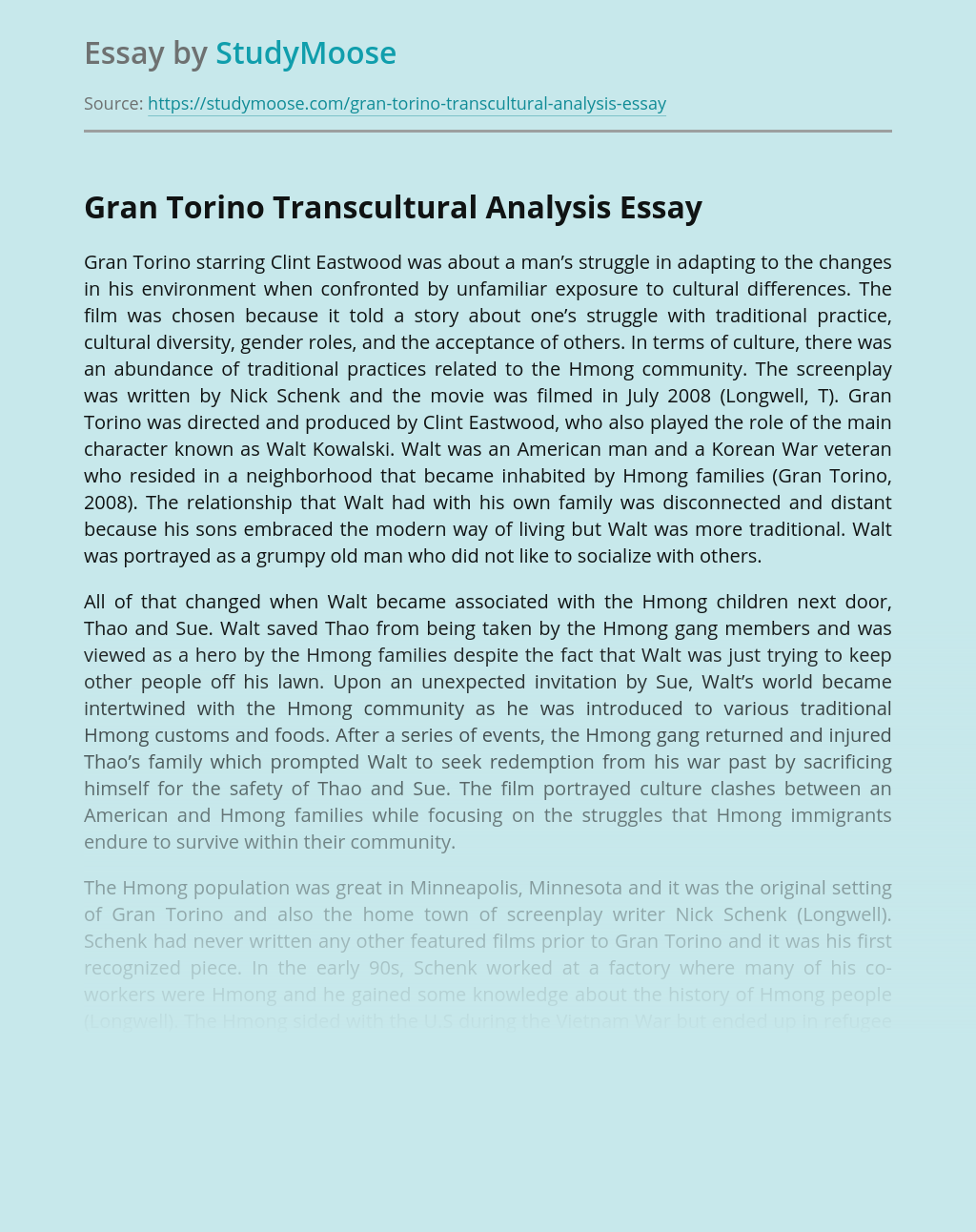 Don’t waste time
Get a verified expert to help you with Transcultural Analysis of Relationship in Gran Torino
Hire verified expert
$35.80 for a 2-page paper
Stay Safe, Stay Original