Relationship between organizational culture and performance

The topic of the link between organizational culture and performance have drawn considerable interest from both academics and practitioners because this theme can help managers design suitable strategies and goals to increase level of performance as well as providing competitive advantage to firms. Among numerous studies discussing about this subject, I found two journals that contains valuable data for interpreting the close relationship between them: “Impact of Organizational Culture on Employee Performance” of Awadh and Saad (2013) and Rose et al. (2008)’s “Organizational Culture as a Root of Performance Improvement”.

Don't use plagiarized sources. Get your custom essay on
“ Relationship between organizational culture and performance ”
Get custom paper
NEW! smart matching with writer

Both journals stated a hypothesis that there is a transparent link between them and a good organizational culture may positively influence its performance. While the former journal focused on indentifying and measuring strong relationship between performance and organizational culture in general, the latter examined this relation in specific case among American, Japanese, European and Malaysian multinational companies operating in Malaysia by obtaining necessary data from self-administered questionnaires designed for respondents of high technology industry.

Sixteen items adapted from Rajendar and Jun Ma’s (2005) work were used to assess the organizational culture on seven-point scale which represents the agreement of respondents.

This secondary research paper which is used as a report of my understanding after reading these two journals will focus on general useful information about organizational culture, performance and their mutual influences.

(2013) defined organizational culture as a combination of shared complex
social phenomena such as values, beliefs, communications and explanations guiding employees’ behaviors. This definition is widely agreed by many other researchers such as Ehtesham et al. (2011) who stated that each organization has a unique culture.

valuable source of competitive advantage and Lunenburg (2011) who explained more clearly about four major functions of organizational culture: “gives members a sense of identity, increases their commitment, reinforces organizational values, and serves as a control mechanism for shaping behavior”. The culture of an organization can do its functions and transfer its messages to employees by four common ways: stories, rituals, material symbols and language (Robbins and Coulter, 2009).

Rose et al. (2008) not only supported Awadh and Saad for their basic understanding about the culture of an organization but also chose the same three perspectives about organizational culture’s dimensions to include in their research: Hofstede’s (1980), Schwartz’s (1994) and Trompanaars’s (1993). Hofstede’s four dimensions including individualism, power distance, uncertainty avoidance and masculinity are considered to be the initial idea for all other’s theory. These dimensions were identified through the value’s comparison among 53 national subsidiaries’ employees and managers of IBM Corporation. In 1998, he worked together with Bond to detect the fifth dimension called “long-term versus short-term orientation”. Schwartz based on Hofstede’s study to build a model containing only two kinds of dimension: conservatism versus autonomy (affective and intellectual) and self-enhancement (hierarchy and mastery) in 1994. Similarly, in 1993, Trompanaars brought a model of seven dimensions which can be a good supported for Hofstede’s model: five under the broad heading of relationship with people communitarians, neutral versus emotional, specific versus diffuse and achievement versus ascription), attitudes to time and attitudes to the environment. These three perspectives of culture dimensions seem to be quite different from seven dimensions of nature culture I have learnt at my university: innovation and risk taking, attention to detail, outcome orientation, people orientation, team orientation, aggressive and stability (Robbins and Coulter, 2009). However, all of these views to look into culture dimensions are helpful for presenting effective relationship between distinctive sets of norms and values in different ways.

Moreover, the authors of the two journals also share the same understanding about a strong culture. They both agreed that a strong culture should include integrated and effective set of values and beliefs from policies, procedures and objectives designed by top manager which can influence upon employees’ behaviors, may bring about a high degree of organization performance and sustainability, and cannot be imitated because of its unique quality. In addition, Awadh and Saad (2013) also mentioned two more levels of culture: sub culture 2

(organization segments with different culture on the basis of geographical areas, job requirements and department goals) and weak culture (the loosely knit organization culture that seems to be more innovative and can help the organization remain its superior performance since it is able to adapt the changes in environmental conditions).

2. Performance and its closely knit relationship with organizational culture Awadh and Saad (2013) defined performance as the degree of an achievement after fulfilling the organizational mission at workplace which may become
the measurement of transactional, efficiency and effectiveness towards organization goals. Rose et al. (2008) thought that performance is a broader indicator that may contain productivity, quality and consistency. According to Rose et al. (2008), performance measures can be comprised of results, behaviors (criterion-based) and relative (normative) measures, education and training concepts and instruments, including management development and leadership training for building necessary skills and attitude of performance management. Both journals mentioned about the traditional performance measurement basing on strategic performance system which includes both financial and non-financial measures and means that we should also consider about intangible asset. Using this method leads to competitiveness which can help in enhancing competitive advantage based upon effective pressures (Rose et al., 2008).

Awadh and Saad (2013) mentioned about four casual relationships between performance management and culture: growth, customers, internal business process and financial reward management system. They said that learning about these four relations can help focusing on cooperative tools of an organization to improve communication and receive feedback which may enhance the performance management. Awadh and Saad (2013) also defined three contributions of culture to performance: forceful management, nature and scope of culture based upon theoretical point of view and competitive advantage attained through strong association and establishment of culture. These findings showed two main inferences: culture and performance are interrelated, and superior and imitable relationship with competitors may result in a sustainable competitive advantage.

All of these findings might help practitioners and academics to manage the value of culture based upon degree of performance. The survey carried out by Rose et al. (2008) revealed that American and European multinational companies, those have higher mean scores in organizational performance, were performing well in all four dimensions compared to Japanese and Malaysian multinational companies: high scores in individualism, low power distance, low uncertainty avoidance and femininity. The findings of their study were reported that the organizations which pay attention to the cultures are more successful. They explained that focusing on cultures provides better financial returns which are significantly correlated to the cultural strength and healthier employee attitudes, the prerequisites to financial and market performance advancement. They also reported that industry moderates the link between corporate culture and performance. These results have advanced understanding of the determinants and performance effects of corporate culture.

Although the two journals seem to have a limitation of a small sample since researching in a wider population is impossible which makes it hard to draw any certain conclusion, Rose et al. (2008)’s research still had a certain strength since they could be able to approach managers and executives from 240 different multinational companies to collect the necessary data. The results of two studies brought about valuable recommendations for employees to try their best in perceiving the organizational culture and top managers to motivate their workers in achieving the company’s objectives by providing a precise guideline and direction. Moreover, the most important thing is that both journals greatly contributed closely knit arguments to prove that there exists a clear link between a strong culture and good organizational performance. 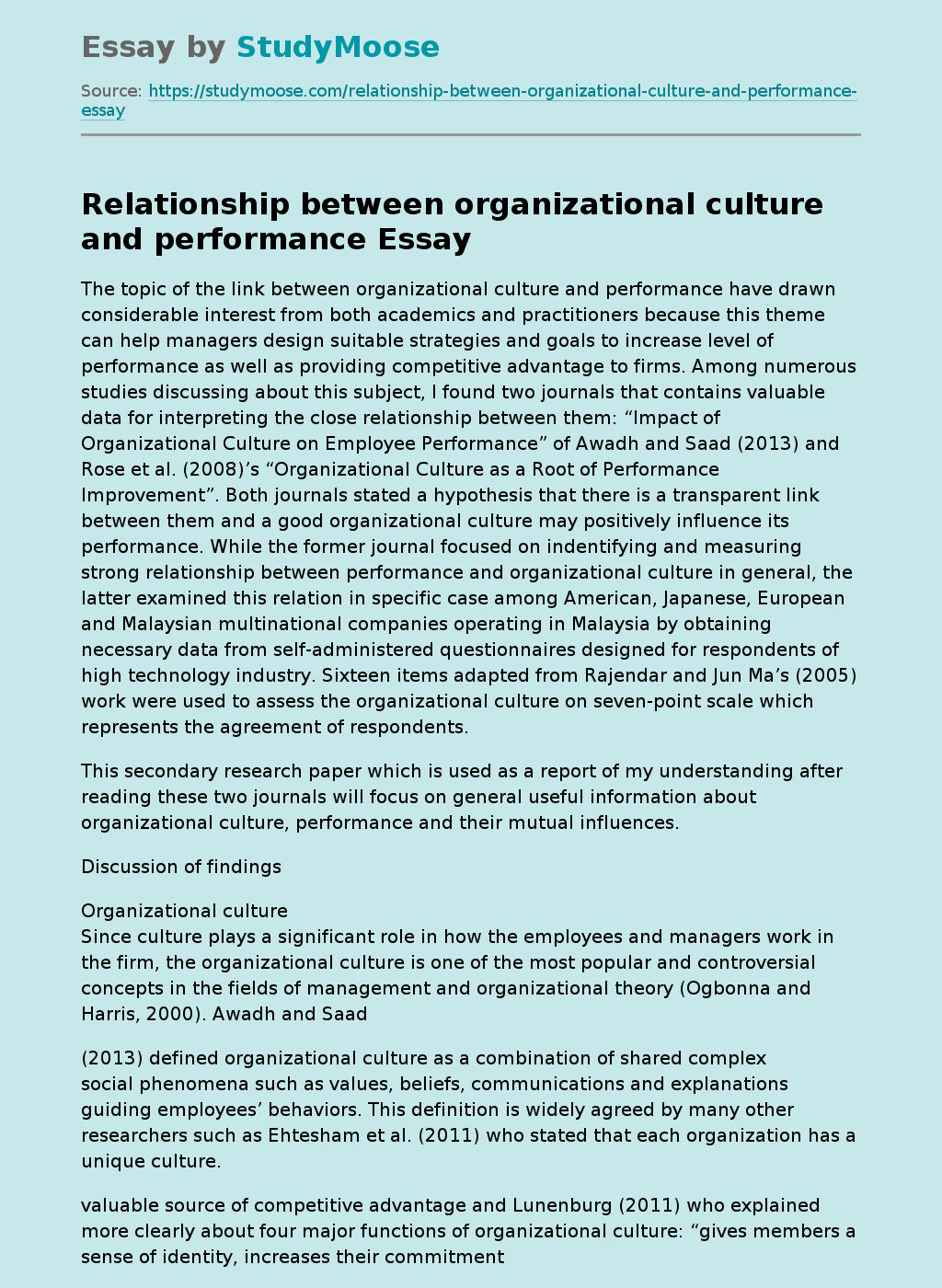