America has always been a different type of country; from the day it fought the British in 1776 to the consumerist America of today. It broke the norm of having a monarch who consolidated power, and instead gave that power to the people. These very important pieces of American history helped spark the transcendentalist movement, as it was the first literary movement in the United States. Transcendentalism, through the works of Ralph Waldo Emerson and Henry David Thoreau, illustrated the beloved ideals of non-conformity, individualism, and the appreciation of beauty.

Don't use plagiarized sources. Get your custom essay on
“ Transcendentalism in Modern America ”
Get custom paper
NEW! smart matching with writer

And, while a transcendentalist society seems impossible in modern American, it is without a doubt that transcendentalism helped form the individuality of what is the American spirit and society. By its nature, transcendentalism goes against the status quo because people’s overly structured lives do not bring happiness to them. Thus, “Society everywhere is in conspiracy against the manhood of every one of its members” (Emerson 3). This is because society is made of many people, but only the individual can decide what is right for him or herself.

Free thinkers have found it almost impossible to live their own life due to the overbearing power of a society that tries to get rid of any source of creativity and individualism, and instead, sticks to a monotonous routine. Transcendentalism does not follow society in its materialistic and over complicated ways, but it states that a person “has hardly need to count more than his ten fingers…” (Thoreau 383). This quote, from Walden, explains how people tend to over think and over complicate life instead of living in its beautiful simplicity.

Thoreau often wondered why people needed to buy new clothes every year, and he was even more mystified by the consumerism and industrialization of the world. His beliefs still hold true today because even with a thousand of the newest pieces of technology, self-gratification cannot be achieved until a person is truly happy. Intentional or not, society always has to, “crucify Christ, and excommunicate Copernicus and Luther, and pronounce Washington and Franklin rebels,” (Thoreau 373).

Transcendentalists believe in a world where people like these can be accepted rather than condemned to death. Even in the modern world, people with ideas that are different are discriminated against and are sometimes expelled for their alleged radical beliefs. Therefore, a transcendentalist society can only be achieved when the constant pressures of the current American society fade away. Contrary to belief, the American society, while extremely pushed by materialistic desires, still embodies a few transcendentalist views.

Civil disobedience is a very common theme found in transcendentalism as many social movements have found their reasoning through the idea of non-conformity such as the Civil Rights Movement of the 1960s and the Women’s Rights Movement of the 1970s. Due to the economic boom of the 1950s, however, America has been a capitalistic consumerist utopia where owning things can substitute self-satisfaction. Many movies and songs today embody the over materialization of America.

In the popular Disney movie, The Little Mermaid, Ariel asks herself the same question in her song Part of Your World because she realizes that she has every item she could want, but it can never fill the hole in her heart. In America, people find themselves lonely and unfulfilled even though they have everything could have ever wanted because they have not found a way to do what they want to do. They have over complicated life, leaving them in misery.

As mentioned earlier, America has started to withdraw from transcendentalism more than ever due to greed, but the “American Dream,” nonetheless has been able to retain those beliefs to some extent. This is because the “American Dream” still envisions what it always has, which is for any person to go after his or her goals and achieve what he or she would like to. There will always be that push from the American society that urges people to seek money before happiness, but the beauty of the “American Dream” is that a person can still do both.

Although, Emerson and Thoreau would be displeased with the American society today, there would be some hope inside their hearts knowing that people can still pursue their dreams. In America, people are taught at a young age to do what they want to in life, and while very few choose to follow this advice, the people who do are the ones who live the “American Dream. ” Transcendentalism gave birth to what would encompass the intrepid spirit of America. Even though this flame is dying, it is clear that transcendentalism cannot burn out in America until the very ideals of free will and opportunity, which made this great country, cease to exist. 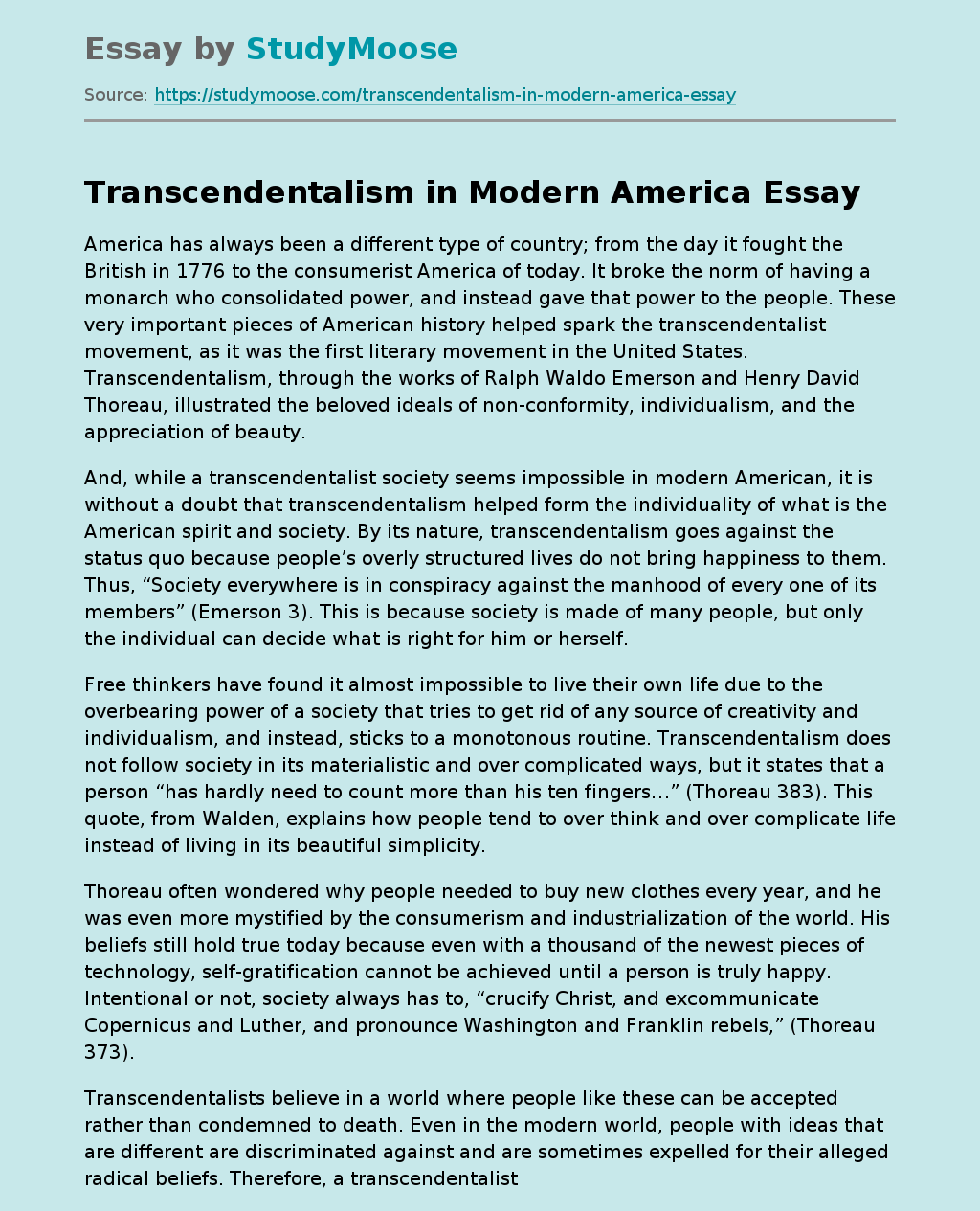