Tragedy in "The Great Gatsby" by Scott Fitzgerald

Tragedy in its classical definition is a serious drama typically describing a conflict between the protagonist and a superior force where the hero possesses a tragic flaw that compels him to reach for something or attempt something that has sorrowful or disastrous conclusion that elicits pity or terror. In Fitzgerald’s novel, The Great Gatsby, Fitzgerald employed multiple aspects of a tragedy to construct this classical novel as a warning for those who blindly pursue an imperfect and hollow life. In the classical novel, The Great Gatsby, Fitzgerald constructed the novel to have its prominent theme be tragedy because he created the protagonist, Jay Gatsby, to be the tragic hero of the novel, he created tragic villains in Tom and Daisy who set Gatsby on a path to his downfall, and Fitzgerald utilized the American 1920’s time period to shape the tragedy of the characters in the book.

Don't use plagiarized sources. Get your custom essay on
“ Tragedy in “The Great Gatsby” by Scott Fitzgerald ”
Get custom paper
NEW! smart matching with writer

In the novel, Fitzgerald intended to demonstrate the hollow world of blind pursuit of the American Dream through the events of the tragic hero, Jay Gatsby.

Gatsby was formed to be the tragic hero as he was born a common man who rose to ‘greatness’. When Gatsby told Nick his birth name, Nick interpreted, “His parents were shiftless and unsuccessful farm people… the truth was that Jay Gatsby of West Egg, Long Island, sprang from his Platonic conception of himself” (Fitzegerald, 104). Fitzegerald had Gatsby be born a poor man so that a seed could be planted within him for desire of a better life, one that he attained through the American Dream, allowing him to completely reinvent himself and change his name.

As Gatsby reinvented himself, he unknowingly allowed for a fatal flaw of his to be easily susceptible. As a tragic hero, Gatsby’s tragic flaw was his inability to come to the realization that he is living a dream of the past. Tanfer Tunc stated that, “[Gatsby was] obsessed with the idea of recreating the past “just as it was,” [he] is blind to Daisy’s selfish, juvenile, and self destructive personality” (Tunc, 2009, p. 74-75). Gatsby, blinded, pursued Daisy for years, with the belief in mind that she would come to him if he had financial success similar to Tom. It was the manner in which he attained wealth, through bootlegging, that reminded Daisy that he is not from ‘old money’ so she could never be with him, even if Gatsby thought she could. In his blind pursuit of Daisy, Gatsby made impaired decisions that lead to his tragic fall, even though the punishment was drastic. As a tragic hero, Gatsby’s ultimate fate was not fully deserved for the flaws he possessed. Nick describes Gatsby after being rejected by Daisy as, “broken up like glass against Tom’s hard malice,”(Fitzgerald, 157). Gatsby was the victim to forces outside his own control that built to his tragic death, in particular Tom’s hard malice that broke him in a moment when he felt the most powerful. This was shortly followed by Tom revealing to wilson that it was Gatsby’s car that killed his wife, fully knowing that Wilson would take his revenge on Gatsby. Fitzgerald designing Gatsby to make terrible judgements and be fatally flawed would not be enough to make this novel a tragedy, it would just make the protagonist a pitiful fool, but Fitzgerald also used villainous characters to build the tragedy.

In order to elevate the tragedy of Gatsby, Fitzgerald used tragic villains in Tom and Daisy to frame and pave the path for Gatsby’s downfall. Tom Buchannan is made to be the direct antagonist against Gatsby as he fundamentally contrasts Gatsby through his lack of a moral compass. At Myrtle’s party, when Tom became angry with her, he acted out and by, “Making a short deft movement, Tom Buchanan broke [Myrtle’s] nose with his open hand”(Fitzegerald, 39). As Tom displayed infidelity and short-sightedness through his lack of respect for women, he contrasts Gatsby’s thoughtfulness, which allowed him to acts so villainous towards Gatsby. Although Tom was directly Gatsby’s antagonist, he alone did not set Gatsby down a path of tragedy. Daisy played a key role in the demise of Gatsby as her selfishness and immorality allowed her to blind sight Gatsby long enough for him to be morally corrupt. Nick described Daisy after Gatsby’s death as, “[Gatsby] knew that Daisy was extraordinary, but he didn’t realize just how extraordinary a ‘nice’ girl could be. She vanished into her rich house, into her rich, full life, leaving Gatsby-nothing” (Fitzgerald, 158-159). Daisy’s return to Tom, her refusal to take responsibility for her part in Myrtle’s death and her absence at Gatsby’s funeral ultimately depict her as equally unprincipled as Tom. It demonstrated that she had no intention of leaving Tom and marrying Gatsby but only to use him for her own self-pleasure until he became a liability. As both Tom and Daisy possess villainous qualities, they’re status compared to Gatsby allowed them to think lesser of Gatsby. As people who inherited their wealth, Tom and Daisy don’t see Gatsby as an equal and that sturs a conflict when he intervenes in their lives. Tanfer Tunc describes it as, “Gatsby, who acquired his wealth through organized crime, is part of this new element of society. As such, he can never participate in the arrogant, inherited ‘old wealth’ of Tom and Daisy, who live in East Egg, the playground of [the] upper class,” (Tunc, 2009, p. 69). As Gatsby attempted to interfere with the world of ‘old money’, he had no realization that he would regret that decision greatly as they are ruthless people who seek only to satisfy themselves, even at the expense of others, which is why Tom told Wilson that it was Gatsby driving the car that killed his wife. Even as Fitzgerald created tragic villains to oppose the tragic hero, he weaponized the time period of the 1920’s to the foundation of all the tragedy in the novel.

America in the 1920’s had a distinct tone to it that no other decade had, hope. Fitzgerald utilities that ‘hope’ to shape the tragedy of the characters in the novel. Gatsby’s tragedy was brought upon himself as he, and many other West Eggers, believed that their pursuit of the American Dream and wealth gave them as much respect as those who were already born into wealth. Fitzgerald’s description of the 1920’s was discussed by Tunc when he said, “As Fitzgerlad illustrates through this microcosm of American society, despite the optimism of the era, the dreams of status-seeking Long Islanders soon become nightmares”(Tunc, 2009, p. 67). The Amercian Dream is tragically flawed as America was founded on the notion that every person had the same opportunity for success. However, this novel suggested that America will always exclude those who are not born into wealth, making Gatsby’s pursuit futile. Just as Gatsby attempted to break into the elite class, other characters also showed a desire to be apart of the elite class too. Myrtle Wilson brought upon her own tragic death as she believed that her exposure to the elite class made her a member of the elite class too. As Tunc described her death, “Myrtle died with her mouth ripped open, as if gasping for air, because her vision of the American Dream left her suffocating in the valley of ashes. The only way out became using her body to acquire the materialism that she believed defined happiness” (Tunc, 2009, p. 77). Myrtle commonly wore elite class clothing to disguise herself as an elitist, but like Gatsby she was unable to comprehend that attaining the American Dream was far more complicated than simply wearing a nice dress and having an affair with someone from East Egg. Therein lies the tragedy of a life that was doomed to disillusionment. Along with Myrtle, George Wilson’s tragic suicide was brought upon himself as a result of the lack of conscienceness of those around him. George Wilson’s murder of Gatsby and suicide thereafter was a byporduct of the social inequality Fitzgerald dipicted in the 20’s in the novel. This was shown when Tom described Wilson as, “He’s so dumb he doesn’t know he’s alive” (Fitzgerald, p. 28). The desolation and deprivation of this society indicated the lack of social conscience present in the privileged classes. In particular the case of Tom who exploits Wilson’s blindness to the situation around him to have an affair with his wife and then blame the death of Myrtle on a man who didn’t commit the crime. In order to build an impactful tragedy, Fitzgerald cunningly used setting as a mechanism to enhance the tragedies.

In crafting a classical novel, Fitzgerald designed the prominent theme of the book to be tragedy because he created the protagonist, Jay Gatsby, to be the tragic hero of the novel, he created tragic villains in Tom and Daisy who set Gatsby on a path to his downfall, and Fitzgerald utilized the American 1920’s time period to shape the tragedy of the characters in the book. Fitzgerald chose to make Gatsby a tragedy as he himself once sought a lifestyle similar to that of Jay Gatsby in the novel. After seeing the desecration of morality through the blind pursuit of the American Dream, Fitzgerald wrote this novel as a warning to any who choose to go down this path. He does not say you cannot go down this path, but he warns to tread carefully, and to keep balance and morals in life to attain true happiness.

Tragedy in "The Great Gatsby" by Scott Fitzgerald. (2021, Feb 03). Retrieved from https://studymoose.com/tragedy-in-the-great-gatsby-by-scott-fitzgerald-essay 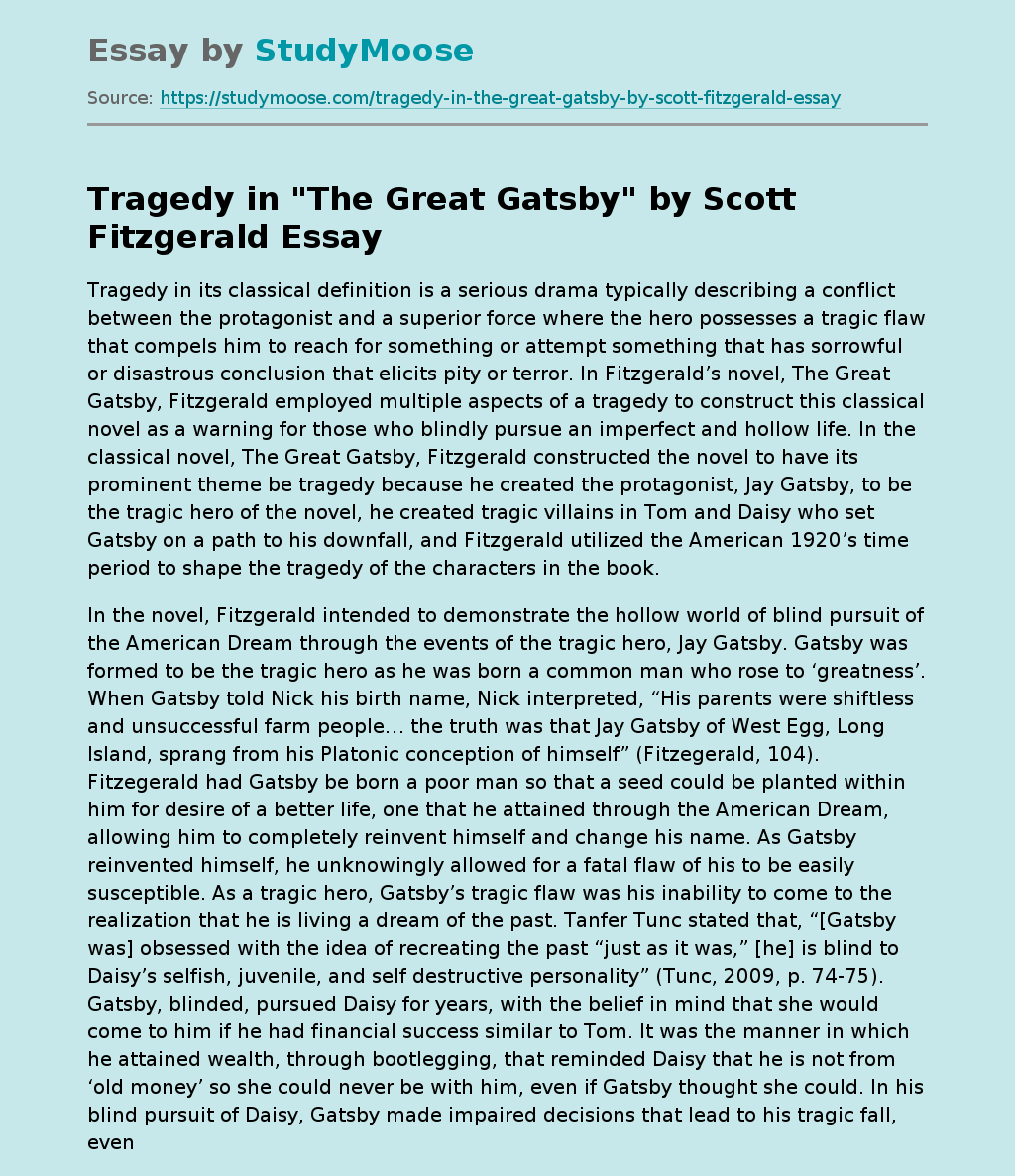