In “The Crucible”, Miller expresses the idea that fear, especially the fear of death, is something very powerful, so powerful that it can prompt people to act immorally, for example lying and accusing others; however, the fear of God is a good type of fear and prompts people to behave morally. This idea is demonstrated through the actions and speeches of a number of characters, including Tituba, Mary and Rebecca.

Tituba is a good and innocent person in the beginning of the play; however, she lies and accuses others of witchery as she is so frightened.

Don't use plagiarized sources. Get your custom essay on
“ The Crucible ”
Get custom paper
NEW! smart matching with writer

She obviously never wants to lie, as she has tried her best to prove that she has not compacted with the Devil, but no one believed in her and she was forced to confess, or else she will be hanged. When she finally confesses, she ‘falls to her knees’, an action which demonstrates her fear and helplessness. All the way through her confession, she seems to be quite reluctant in doing so and does not feel comfortable about it.

This is demonstrated through the stage directions of ‘weeping’, ‘sobbing’, ‘rocking on her knees’ etc. These show that she is not a malicious person and she does not want to lie, but the fear of death is so overwhelming that she has to do so.

When she is forced to accuse others, she ‘pants and begins rocking back and forth again’. This again shows her reluctance and the fact that she does not want to accuse any innocent people; but again, she has to do so because they are ‘pressing in on her’ and she knows that this is the only way she can survive.

Mary, who is so frightened of Abigail, dare not tell the truth in the beginning. When she finally plucks up the courage to do so, she cannot stand the hostility of the situation and the fear for her own life forces her to accuse Proctor.

When Proctor forces her to tell the truth by the end of Act 2, she ‘sobs, “I cannot, I cannot…”’ Her action of sobbing demonstrates her reluctance in telling the truth in the court; however, she does not want to do so not because she is malicious, but because she is so frightened of Abigail, who is very manipulative. This is demonstrated through her terrified speech when she tries to refuse Proctor’s demand. She says, “She’ll kill me for saying that!” The ‘she’ here refers to Abigail. The fact that Mary uses exclamation mark here shows that she is terrified of Abigail.

When Mary tells the truth, it is obvious that no one believes in her, the judges even ask her, “Has Proctor threatened you?” twice, highlighting the fact that they clearly do not have much confidence in her credibility. This already makes her feel more fearful, especially when her character is shy and timid. Her fear is increased when the judges force her to confess by telling her, “You will confess yourself or you will hang”, which gives her no alternative at all. These all increase her fear for her life. The fear of death prompts Mary to turn away from Proctor and accuses him. When she does so, she cries, “I’ll not hang with you.” Her firm tone here reveals her desperation. This shows that although she is willing to tell the truth and be a good person, the fear of death is too overpowering that it is more than she can manage.

Through the character of Rebecca, Miller expresses the idea the fear is not always a bad thing, as long as the object of fear is a good one. Rebecca is a good Christian, and because of her fear of God, she will not and cannot do anything immoral. In the final act, when she is persuaded to confess, she refuses by saying, “It is a lie, it is a lie; how may I damn myself? I cannot, I cannot.” In her rhetorical question, she uses the verb ‘damn’, which refers to the condemnation to hell to a Christian.

She cannot lie because she is fearful of God and does not want an eternal punishment from God. Her fear of God prompts her to behave morally. Her fear for God overpowers her fear for death, as she says in the final scene, “Let you fear nothing! Another judgement waits us all!” The fact that she uses two exclamation marks shows that she is fearless, and that the fear of death does not even have the slightest impact on her, because she knows that what she is doing is right and acceptable to God, whose judgement she fears more. 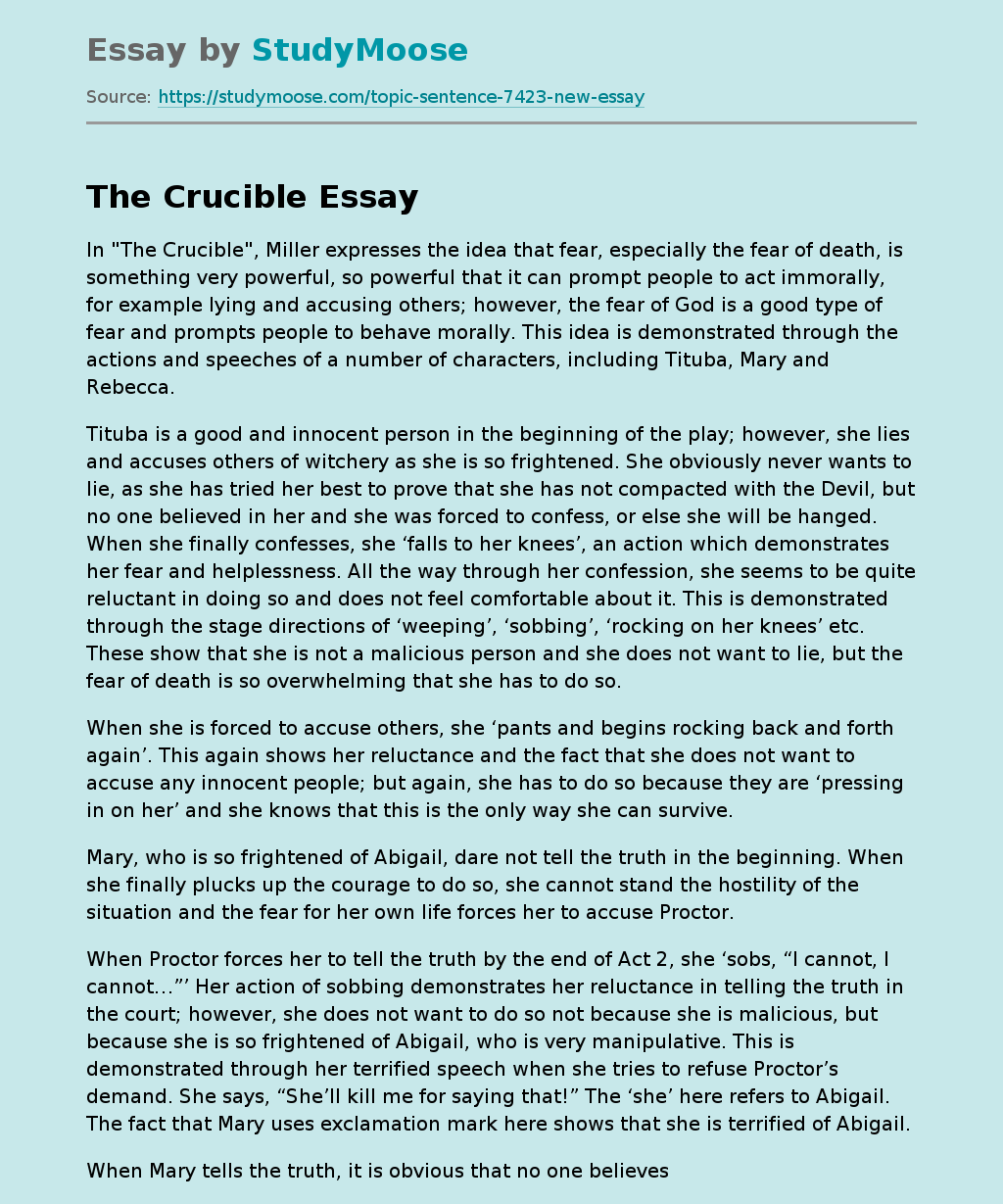