How do Tony and Jo think their experiences of attachment and separation may have affected them?

This qualitative analysis examines the experience of a middle aged couple using pre-existing material consisting of 3 interviews on video tape and transcripts. It explores how attachment and separation in their early life may have affected them and relates this to Bowlby’s theory. The study concludes that there are other influences apart from the mother/mother figure that have an impact on adult attachment styles.

Don't use plagiarized sources. Get your custom essay on
“ How do Tony and Jo think their experiences of attachment and separation may have affected them? ”
Get custom paper
NEW! smart matching with writer

Human infants have a biological drive to achieve security through the relationship to the mother figure – this is the primary attachment. He draws on different sources in constructing his theory such as; systems theory/cybernetics, ethology, neuroscience, primate research, object relations and developmental psychology.

Bowlby’s whole focus is on the ‘mother or mother figure’ and that the infant builds up an ‘internal working model’ which is essential for later mental health, future relationships and social behaviour. This is made up of three components; model of self, model of the mother figure and the model of the relationship between the two.

For the infant to build this, the mother has to be a secure base for the infant, especially during exploration. The infant needs to be certain that the mother can be returned to, to provide comfort and support should the environment become too demanding.

Ainsworth, a colleague of Bowlby’s went on to identify three different attachment types based on the behaviour of mothers and infants observed in the ‘strange situation’

The types are: Type A: insecure, anxious avoidant

Research shows (cited in Wood, C. et al 2002 pg 33) that the infant attachment style does not always predetermine the adult attachment style. It was found that life events such as illness and divorce had the most significant influence. Another study revealed that the correspondences between attachment styles were found mostly in family’s that had stayed the same, with no major outside events.

There are also secure adult attachment types who have had difficult childhoods. This has been called ‘earned attachment type’ and is thought to be due to positive future relationships.

Page 3 Although Bowlby’s attachment theory is helpful in understanding the role of the mother in a child’s life, and the effects it can have long into adult life. It does not take into consideration the effects of outside influences. Whilst this primary relationship with the mother is important, it does appear that life changes are equally as important. Finally, in the studies mentioned here, it is worth saying that they have not said what the mother did in any of these circumstances – was she there as a secure base whilst the changes were happening, or did they affect her, having an impact on the child’s stable base?

Using pre existing material from the Open University, I, an Open University student carried out a thematic analysis on two semi structured interviews. The transcripts for these were provided in a booklet together with a video tape of the interviews. Two researchers were used to interview the same couple; the first was a woman who knew the couple quite well. The second was a man who had never met the couple before. They both focused on the same question of identity, allowing the couple to reflect on their experiences. There was also a further interviewer who attempted to get the participants to reflect on their experiences of the two interviews.

Throughout the interview, a camera crew were present filming as the interviews are by consent used for teaching purposes. This makes the interviewing conditions quite different and the effect that this may have on the people being interviewed and the interviewees will be taken into account in the report.

To carry out the thematic analysis I used ‘condensation, and ‘categorization’. After reading through the transcript, I then watched the video tape and selected three main

themes. I condensed the data down and allocated what data fitted into what category by using a colour system. The annotated transcript can be found in appendix 1.

In view of the research question ‘How do Tony and Jo think their experiences of attachment and separation may have affected them, and how does this relate to Bowlby’s theory of attachment?’ I have found three major themes – ‘childhood’, ‘work’ and relationships’.

The reference to Tony and Jo’s childhood is discussed in both interviews. In the first interview Jo concludes that they have completely different experiences when in fact they have strong similarities as both their father’s were taken away during the war and they were both removed from the family home.

How do Tony and Jo think their experiences of attachment and separation may have affected them?. (2020, Jun 02). Retrieved from http://studymoose.com/tony-jo-think-experiences-attachment-separation-may-affected-relate-bowlbys-theory-attachment-new-essay 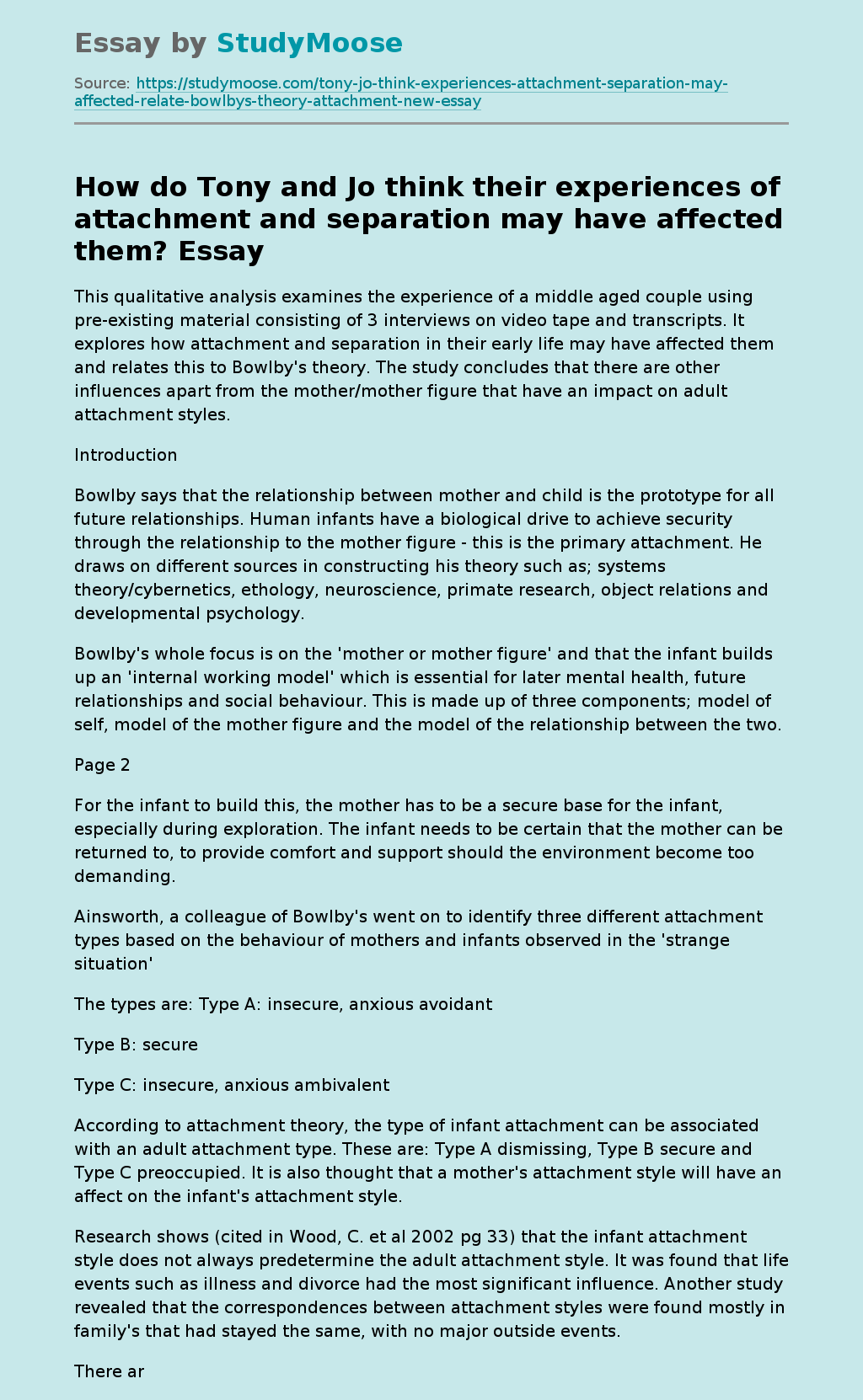