Tomorrow when the war began Essay

Tomorrow when the war began, written by John Marsden is an action genre book. The main themes are survival, change, relationships, friendships, courage, self-discovery and morality. The brief storyline is that Ellie and 6 friends go camping in a secret place for a week, and when they return a war/invasion has started in their hometown of Wirrawee.

Throughout the rest of the book Ellie and her friends, Homer, Fi, Corrie, Kevin, Lee and Robyn make plans and take action against the war/invasion as they are the only few people left uncaptured.

Don't use plagiarized sources.
Get Your Custom Essay on Tomorrow when the war began Just from $13,9/Page

Some of the key points in the novel are Ellie and her friends going camping, Lee gets shot, Ellie, Homer, Lee and Fi blow up a tanker under a bridge to stop the enemy from sending more of their troops into the area, and Corrie and Kevin go to the hospital because Corrie gets shot.

I think the authors intensions were to make everyone think about what they would do in a similar situation.

Positive aspects of the book are that it might give the readers ideas about what to do in a situation such as this. Negative points are the author did not make the book very easy to understand as he kept jumping from place to place, like it went from Ellie and Fi sitting in the tanker waiting for the signal from Homer and Lee, and then it would jump to Homer and Lee with the cattle in the paddock. Also the story line could have been better.

The themes are very easy to identify though, which is good for writing essays, also all the themes identified related to storyline well. In conclusion my overall thoughts on the novel “Tomorrow when the war began” were mainly negative as the storyline is a vital piece in a novel. Also if you can’t understand a book it make s you want to stop reading it, which is why I wanted to stop because I was getting confused as to what was going on where.

You may also be interested in the following: tomorrow when the war began essay

Tomorrow when the war began. (2016, Sep 10). Retrieved from https://studymoose.com/tomorrow-when-the-war-began-essay 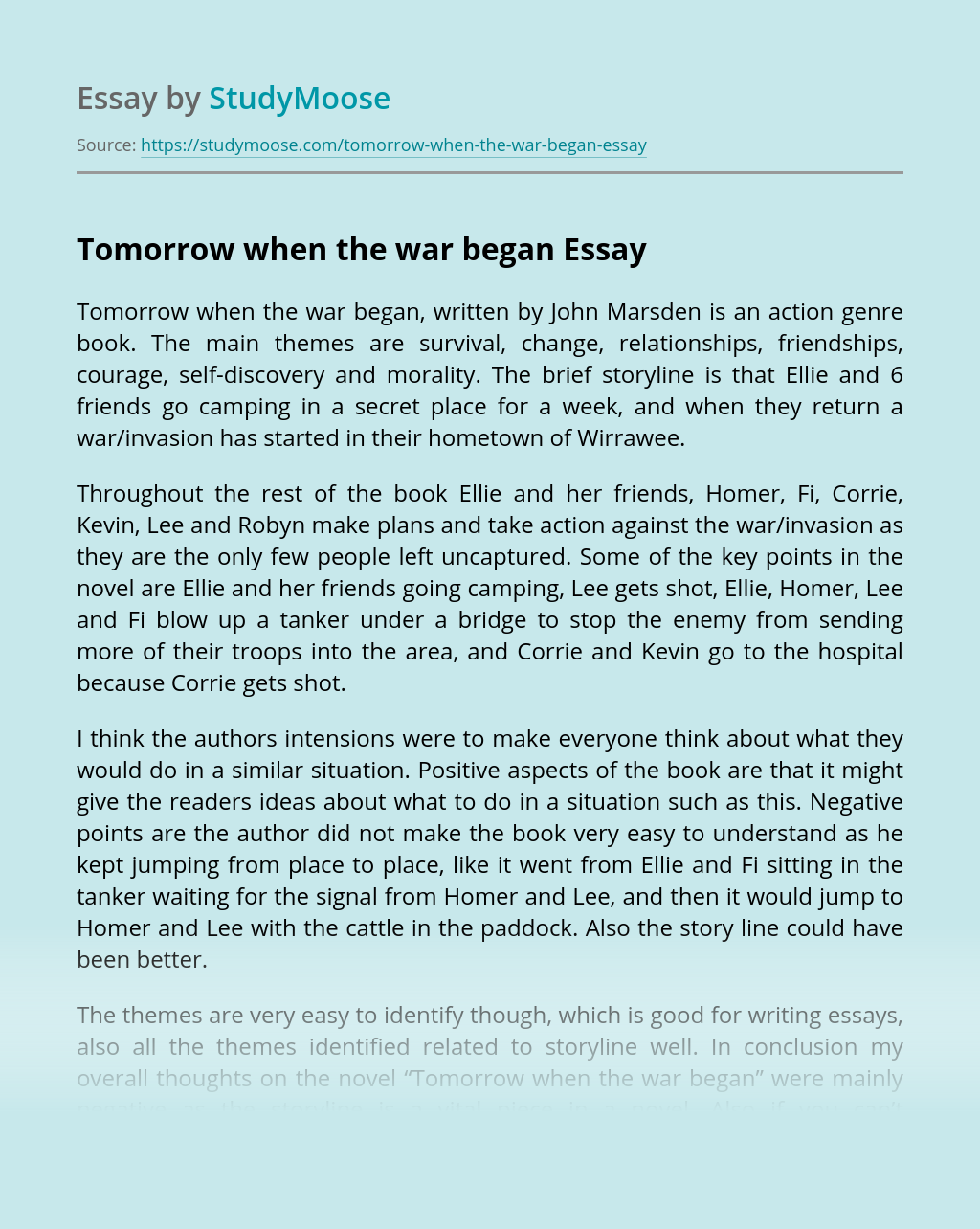