To What Extent Does Duffy Present The Body As A Key Aspect Of Female Identity? Tragic and disconcerted themes are continued throughout poems of Duffys such as ‘The Map Women’, ‘The Woman Who Shopped’ and ‘The Diet’; Duffy is trying to aggress to the reader the predicaments with the body being used as a key aspect of female identity in modern society. Fractious subjects like anorexia are used to address how extreme the pressures are to be accepted in society

Duffy’s uses ‘The Diet’ alike the ‘The Woman Who Shopped’ to symbolise the lengths women will go to, to feel beautiful or at least be led into the belief they will be.

Don’t waste time
Get a verified writer to help you with To what extent does Duffy present the body as a key aspect of femal identity
Hire verified writer
$35.80 for a 2-page paper

In the poem ‘she stayed near people like a germ’ which indicates to us as a reader that maybe she took on this disease all in aid of gaining more social acceptance, but incidentally it has had an adverse effect.

The use of ‘germ’ is a powerful simile, as germs have connotations of being irritating and inhumane, which leads me to believe that Duffy is trying to express the way how a woman appears, affects the way in which she is treated.

It highlights the way some women feel that being identified as being attractive can raise your prominence in society – we can be led into false pretences that attractiveness can be emulated in personality; but sometimes attractive people don’t always possess stereotypically attractive personality traits like benevolence or thoughtfulness. Although I believe the ‘anorexia’ could be an extended metaphor for this woman changing her appearance, the ‘shrinking’ weight being her metaphorical ‘self’ being lost and the ‘fat woman trying to get out’ symbolising her real identity being trapped by this false persona.

If this was the case then I believe Duffy would be trying to say that ‘appearance’ isn’t always the key to identity, women are very good at deceiving people as they can counterfeit different identities by simply changing their hair/makeup/clothes. This implies that the body is not always ‘the key’ to a woman’s identity and sometimes to acquire a woman’s true identity you need to metaphorically look deeper than demeanour. Some people may believe that ‘The Map Woman’ is signifying that a woman’s body defines her identity, but I regard that Duffy is trying to articulate that a woman’s body can’t define her unless there is physically a map on her body.

Duffy takes this hypothetical situation of ‘a woman’s skin was a map of the town’ conceiting what it would be like if a woman’s identity was imprinted on her skin. ‘town’ has connotations of community where nothing is disclosed, which means that if your identity did define your appearance then you wouldn’t be able to escape from it. Also her skin is described as being ‘a delicate braille’ which shows the range of accessibility to her ‘identity’- this is symbolic because it shows in reality where the skin isn’t in braille, blind people wouldn’t be able to see our identity from our physical stature.

Obviously this reinforces the fact that the body is not in fact our identity and it’s out our temperament that is the key part of our true identity. Duffy brings about ideas that you are always connected to who you once were even if you begin to change and develop physically and mentally, ‘heart of the town’ has connotations of home, love and belonging symbolising that even if you do emigrate there is always that interweaved connection with your place of birth and sense of self. I believe the town may be euphemism for her identity; a use of conceit to show that identity is similar to home – it feels the most comfortable but consequently you need to abscond from it occasionally.

The Map woman ‘piled on linen, satin, silk..’ which all have the affinity of being luxurious, Duffy uses this to suggest that we sometimes exploit the fact we can change our body and appearance by becoming a completely different person. It also reinforces like the other poems that what you see on the exterior of a person isn’t always their true identity. ‘she spoke in a foreign tongue’ indicates that as you begin to change your body and appearance, over time you start to become unrecognisable to your true identity. ‘Foreign’ has the particular effect of emphasizing to the reader that sometimes a woman’s body is a stranger to herself and female identity is therefore not what the body dictates.

Overall I believe that Duffy is trying to reiterate that a woman’s body does not define her. A woman can use her body as a canvas to express to other people who she wants to be, but not always is this her true identity. There is strong use of feministic views in these particular poems- a theme that Duffy generally uses throughout her work. The whole job of these poems in my perspective is to show that a woman is more than just an object of lust from men (as perceived in outdated views of the past). They are all about women finding their voice, as the women included in the poems are not given a names – this conveys the idea Duffy is giving all women a voice in her poems.

This is poetic conceit in the sense that instead of complaining that women aren’t given a voice enough, she is using her power as a poet to deliver a set of poems that reinforces a woman’s importance in society and shows women can and do make a change in the world.

To what extent does Duffy present the body as a key aspect of femal identity. (2016, May 21). Retrieved from http://studymoose.com/to-what-extent-does-duffy-present-the-body-as-a-key-aspect-of-femal-identity-essay 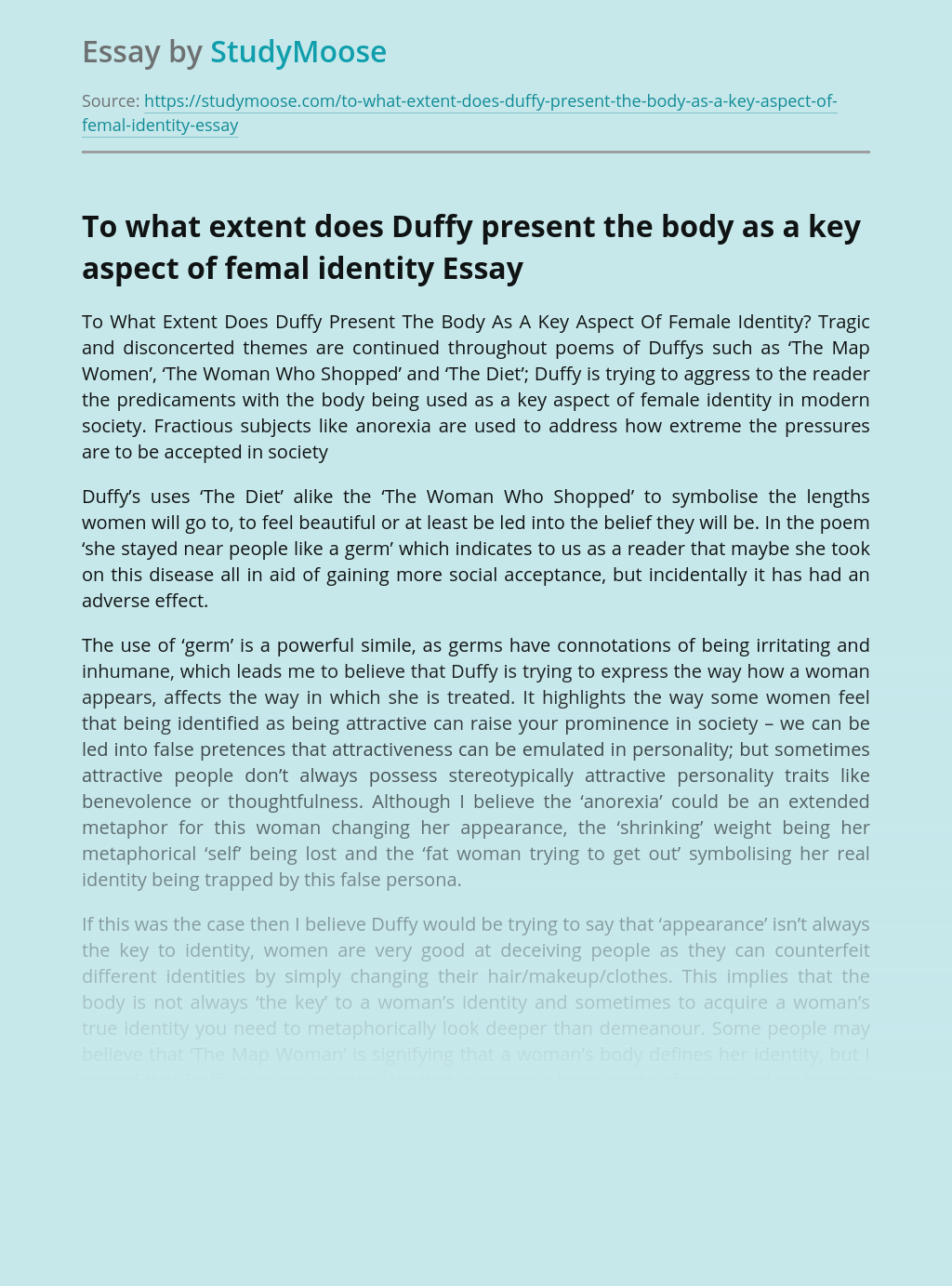 Don’t waste time
Get a verified writer to help you with To what extent does Duffy present the body as a key aspect of femal identity
Hire verified writer
$35.80 for a 2-page paper
Stay Safe, Stay Original