To Kill a Mockingbird: Plot Analysis

In the late 19th century, African Americans have suffered racial discrimination by white people. So they have decided to make a civil rights movement and it has taken place during the 1950s and 1960s. What is the purpose of this movement? The main purpose of this movement was to gain equals rights and to end legalized racial discrimination under the law in the United States. In Harper Lee novel, To Kill A Mockingbird’, he has focuses on this main subject, racism against the blacks.

Don't use plagiarized sources. Get your custom essay on
“ To Kill a Mockingbird: Plot Analysis ”
Get custom paper
NEW! smart matching with writer

He describes the daily life and struggles of a family who has defended black men accused of crimes. The books are set in a small, tired old town called Maycomb.

According to Scout, Maycomb is a place where There was no hurry, for there was nowhere to go, nothing to buy and no money to buy it with, nothing to see outside the boundaries of Maycomb County.'(pg 5) This shows that the town is very poor and we can assume that this story takes place during the years of the Great Depression.

We can see some characters in this story who are affected by the economic status of the town. For example, the Cunninghams and the Ewells. The Cunninghams pay Atticus, Scout’s father, with goods such as stove wood and nuts when Atticus help them with legal work. As for the Ewells, they live beside a garbage dump in the woods. To conclude, ones economic status shows us what class they are in. The rich and educated are upper or middle class, the Finch.

Meanwhile, the poor and uneducated are lower class such as the Cunninghams and Ewells. Harper Lee used the first-person narration in the novel To Kill A Mockingbird. Jean Louise Finch or Scout has been chosen as the first-person narrator. In chapter 1, it is apparent that when Scout is older she starts to reminiscing her childhood in Maycomb.

When enough years had gone by to enable us to look back on them, we sometimes discussed the events leading to his accident’.(pg 3) The story starts when Scout is five. Therefore, most part of the story is narrated in a childhood perspective. At the beginning of the story, Scout mainly narrates about Boo Radley. Whereby Scout, Jem, and Dill always play around Radley’s house and make a play about them. In the middle part, Scout’s family starts to having struggles as Atticus has to defend a black guy who has been accused of raping. As Scout is only five so she could not understand some of the words that had been used by the elderly. Hence, she tries to describe every scene in detail as possible.

Scout is a 5-years-old girl who is not interested in ordinary girl things. She prefers to friends with guys which is Jem and Dill. She is a tough girl too. She always defends herself and she does not cry or whine when things went wrong. In chapter 2, Scout has done something that made Miss Caroline gets mad at her. Jean Louise, I’ve had about enough of you this morning’ (pg 22) Miss Caroline calls her to the front of the class and she spanks her with a ruler. Scout does not complain to Atticus but instead, she went and bullies Walter Cunningham as he is the reason she got on Miss Caroline bad side. Aunt Alexandra does not like this side of Scout since she believes that girls should behave modestly and courteously. Thus, Aunt Alexandra decides to stay with Atticus to make a decent girl out of Scout.

To Kill a Mockingbird: Plot Analysis. (2020, May 20). Retrieved from https://studymoose.com/to-kill-a-mockingbird-plot-analysis-essay 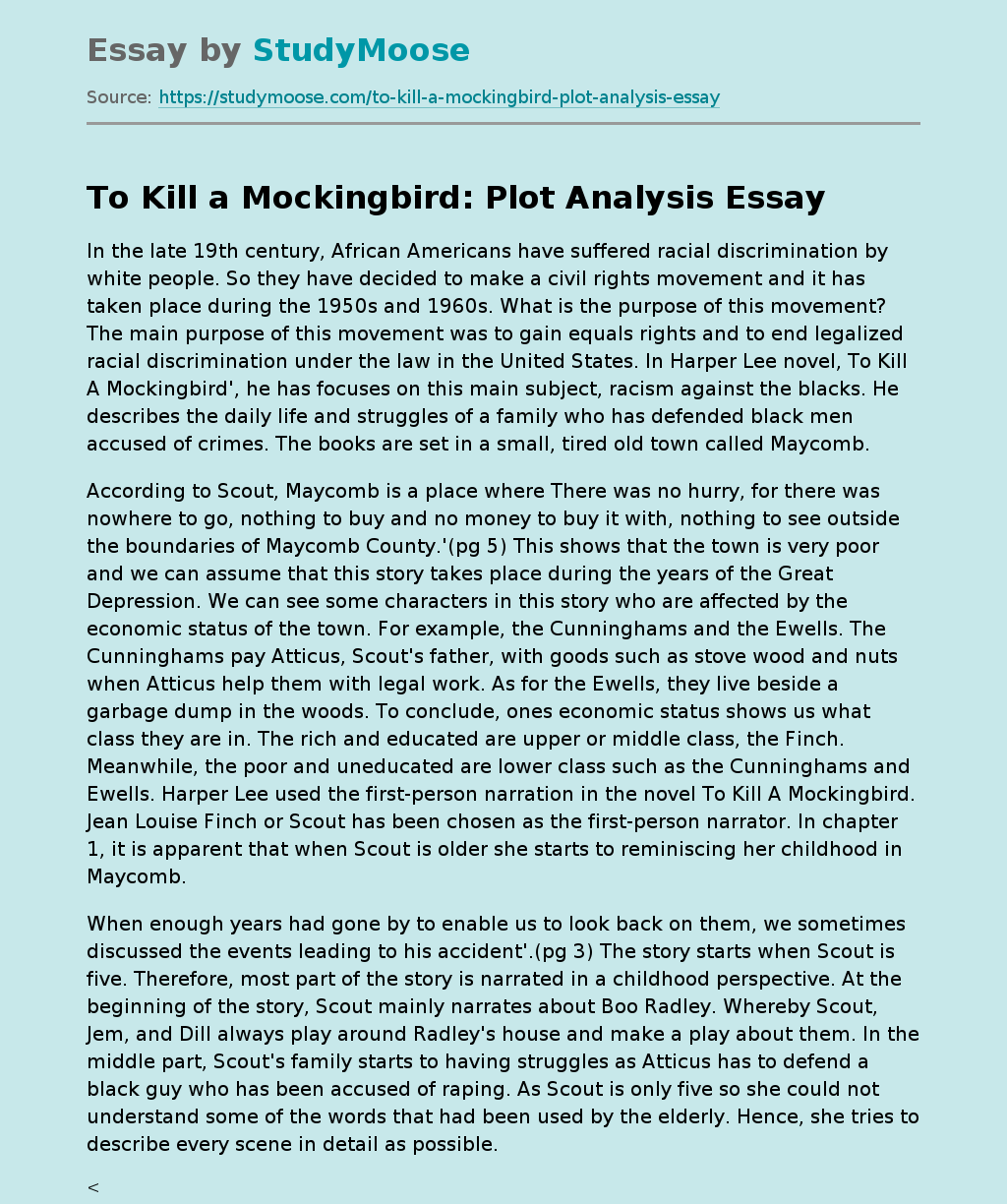