'To Kill A Mockingbird' by Harper Lee Novel Analysis

‘To Kill A Mockingbird’ by Harper Lee is a novel published in 1960. In this novel, Harper Lee explores her concerns in the setting of 1930s Maycomb County, Alabama, of different moralities throughout the novel, the unjust ways of the harsh expectations forced upon women and their behaviour, and the flaws in the law system. She portrays and identifies issues of society through the eyes of a 6-year-old character in the novel, Jean Louise Finch, better known as Scout. Lee approaches these concerns in such a way that allows the reader to perceive her exploration of the text and encourages the reader to compare the society of 1930’s Alabama and today’s society and recognise the differences and the similarities in her concerns.

Don't use plagiarized sources. Get your custom essay on
“ ‘To Kill A Mockingbird’ by Harper Lee Novel Analysis ”
Get custom paper
NEW! smart matching with writer

With the ongoing threat of World War II, society’s morals contrasted from person to person. Harper Lee expresses this by portraying the drastic differences in moralities between Atticus Finch, Bob Ewell and the rest of the community, presenting the difference between good and evil in the characters.

An example of differing moralities is displayed in the novel when Atticus states that In our courts, all men are created equal. Lee uses allusion to the Declaration of Independence to further add context to the novel and emphasise Atticus’ morals and how they contrast from other characters in the novel such as Bob Ewell. When Ewell is overheard saying One down and about two more to go it foreshadows Bob’s attempt to murder Atticus’ children after the defence of Tom Robinson, also displaying the evil’ in him.

These two quotes portray the morals expressed through Lee’s use of dialogue of her characters and how drastically different they are. The contrast is used by the audience to gain a deeper understanding of Lee’s concerns in society through the use of ranging morals portrayed by different characters. In 1930’s Alabama, gender roles were very common, and Scout challenges these gender stereotypes. Women were expected to be housewives and conduct themselves like how women were supposed to behave in a patriarchal society. Harper Lee uses Alexandra Finch Hancock, otherwise known as Aunt Alexandra, as one of the characters that represents sexism. She explores traditional gender roles through Scout, as Scout grows up and gets familiarised with the society she is growing up in, Aunt Alexandra tries to teach Scout what is expected of her as a little girl growing up, enforcing rules upon Scout about what is ladylike’ and what is not. Lee heavily characterises Aunt Alexandra by giving the reader insight into Alexandra’s nature and her beliefs about how a proper’ woman should behave. It’s not ladylike folks don’t like to have somebody around knowing more than they do. Tone further demonstrates Aunt Alexandra’s beliefs, that education is not important for woman, but instead, they are expected to stay at home and attend to chores such as cooking, cleaning, and taking care of the children inside the house. Jem is another character who believes in traditional gender roles as influenced by the society, Jem told me I was being a girl, that girls always imagined things, that’s why other people hated them. The irony used in this reveals that Jem and other boys his age have been thought by the society that girls are to be hated, they are not to be liked. Lee further emphasises this since no female character in the novel had a job, except Calpurnia, albeit a housekeeper.Throughout the novel, Harper Lee wanted to express her concern about the flaws in the legal system concerning Tom Robinson’s rape trial. Innocent 6-year-old Scout reveals to us the harsh truth about the law system when she declares Atticus had no case. Tom was a dead man. Lee used a metaphor when she says that Tom was a dead man, meaning he had no chance of being proven innocent. Lee also uses foreshadowing to hint to the fact that Tom would die. Symbolism was expressed through the characterisation of Atticus such as when he said knowing you’re licked before you begin but you begin anyway. This quote portrays his strong values and beliefs about justice and that he would try to attain it no matter what the outcome may be, thus Atticus was presented as a symbol for justice and equality displaying real courage.The reader obtains an extensive understanding of Lee’s concern about the law system through her exploration of how unjust and biased the system was.Through the use of many techniques including symbolism, allusion, foreshadowing, characterization, and tone, Harper Lee encourages us to reflect and realise the importance of differing morals, misogyny and the flaws that lie in the law and social judicial system and how they affect the society. This has an effect on the reader and motivates us to compare the society of Maycomb County and the society we live in today, noting the differences and similarities in the way morals, sexism, and the law system has changed, applying this knowledge to the process of self-actualisation.Word count: 842′

'To Kill A Mockingbird' by Harper Lee Novel Analysis. (2019, Aug 20). Retrieved from https://studymoose.com/to-kill-a-mockingbird-by-harper-lee-novel-analysis-essay 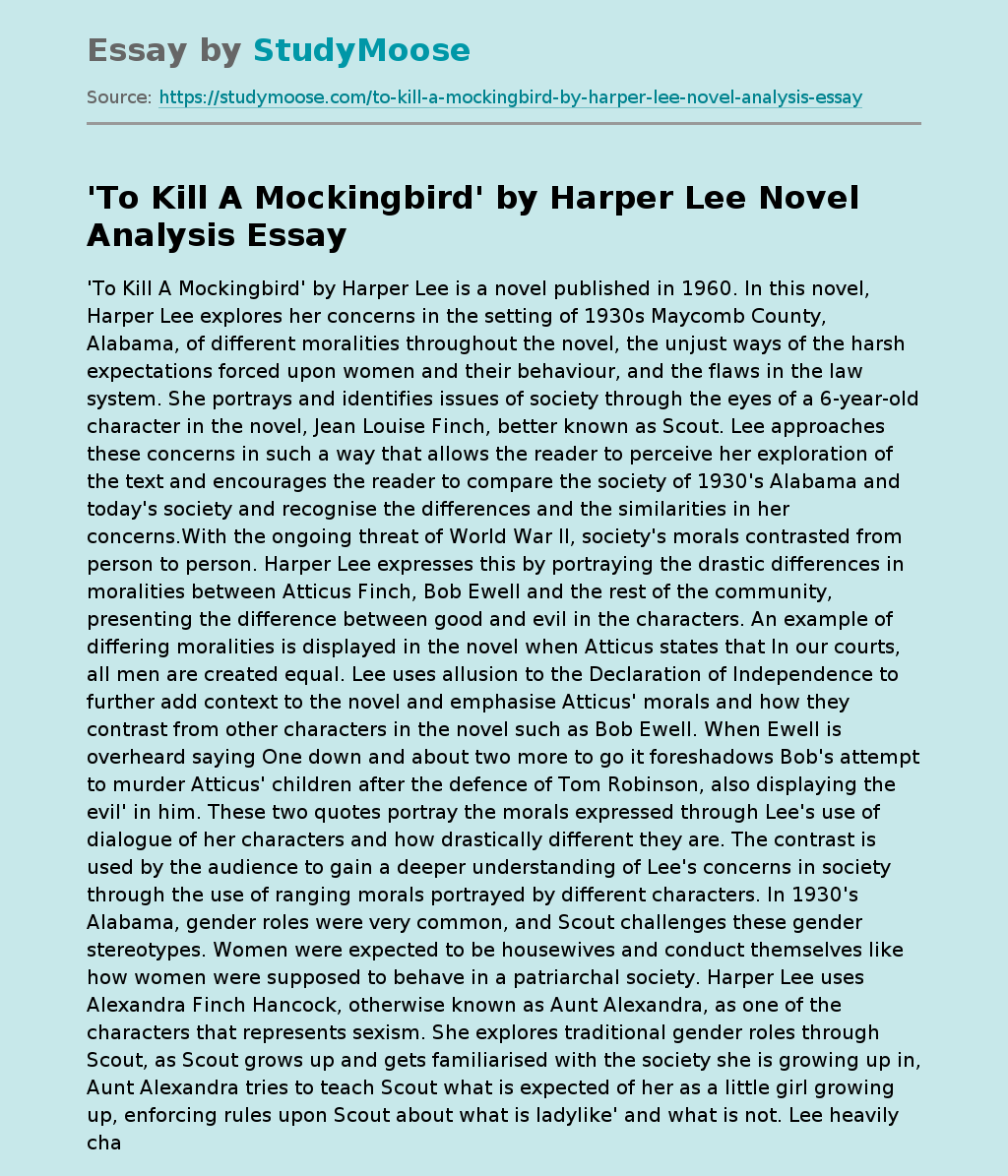