"To Kill A Mockingbird" by Harper Lee

In the novel To Kill a Mockingbird, Harper Lee tells the story of Scout and Jem, two young children who learn about racism and injustice in the small town of Maycomb, Alabama, in the 1930s. The children’s father, Atticus, is a lawyer who is appointed to defend Tom Robinson, a black man unjustly accused of rape. It is through this trial, as well as through other characters, that the children learn about the injustices of the world and the need for compassion, a trait that demands that we rise above our selves and see “things from another point of view.

Don't use plagiarized sources. Get your custom essay on
“ “To Kill A Mockingbird” by Harper Lee ”
Get custom paper
NEW! smart matching with writer

Finally, it is through compassion that we can overcome human weakness, such as prejudice and injustice, and act with integrity and courage. In To Kill a Mockingbird, Arthur Radley, Mayella Ewell, and Tom Robinson are three characters that demonstrate the need for compassion.

One of the few characters that deserve compassion in this novel is Arthur “Boo” Radley. His father prohibits him from leaving the house and having any contact with the rest of Maycomb. Thus, it is just about impossible for him to even live a normal life.

Moreover, Arthur’s mysterious lifestyle inevitably leads to frequent false accusations that more than hurt his reputation. From Arthur Radley, Jem and Scout as well as the reader learns that what one may think of another may not be true until they completely understand things from that individual’s standpoint. As Mrs. Maudie says it, “…they don’t do one thing but sing their hearts out for us. That’s why it is a sin to kill a mockingbird.”

This quote is a perfect description of Arthur and how he treats others. It tells the reader that like a mockingbird, he does good deeds for others and asks of nothing in return. For instance, in the novel Arthur puts gifts in an oak tree for Jem and Scout to enjoy. In addition, towards the end of the book, he rescues them from Bob Ewell’s sudden attack. Yet, a person worthy of compassion does not necessarily have to perform good deeds. A good model of this is Mayella Ewell.

In a society so concentrated on one’s wealth, it is hard for anyone like Mayella Ewell to meet its expectations. Therefore, one may also be compassionate towards Mayella. Living in poverty, she has to struggle to support seven siblings along with a drunken father. What’s more is that her family’s past not only affects others’ outlook on her; it takes away from her sense of worth as well. She has no friends and through the trial Scout realizes that she “must have been the loneliest person in the world.” Harper Lee also informs us that the Ewells have “brilliant red geraniums, cared for as tenderly as if the belonged to Miss Maudie Atkinson.” She further states that these flowers belong to Mayella.

Since having no friends, Mayella turns to gardening. She treats the flowers as though they were her only friends and cares for them dearly. This shows that she is just a normal child who needs as much care and attention as anyone. But because of her family history others don’t feel the need to have compassion for her. Also as a result of her horrible upbringing, Mayella soon makes a choice that would eventually ruin another “mockingbird.”

Deserving more compassion than anyone is Tom Robinson. Tom, a poor black male, has to make a great effort to provide for a wife and four kids. He is a hard working and sincere man whose only mistake was having sympathy for Mayella Ewell. He tries to do her favor but because of the racism in Maycomb, Tom is soon accused of raping Mayella and founded guilty. Losing hope, he tries to flee but is soon shot down because of his crippled arm. Then shortly after Tom’s death Scout finds a roly-poly in the house.

‘Because they don’t bother you,’ Jem answered in the darkness.”

The roly-poly is a perfect portrayal Tom Robinson in that both of them had not done anything to cause any harm. Nevertheless, they are both punished. Jem understands this because he feels compassion for the insect as well as compassion for Tom.

As Arthur, Mayella and Tom’s situations show, having compassion is a necessity when dealing with others. Through compassion we understand from a different perspective what someone experiences. It is through this perspective that we rise above our differences and accept what is truly there. Without compassion, discrimination, injustice and rivalry will surely prevail.

"To Kill A Mockingbird" by Harper Lee. (2016, Jun 28). Retrieved from https://studymoose.com/to-kill-a-mockingbird-by-harper-lee-essay?post 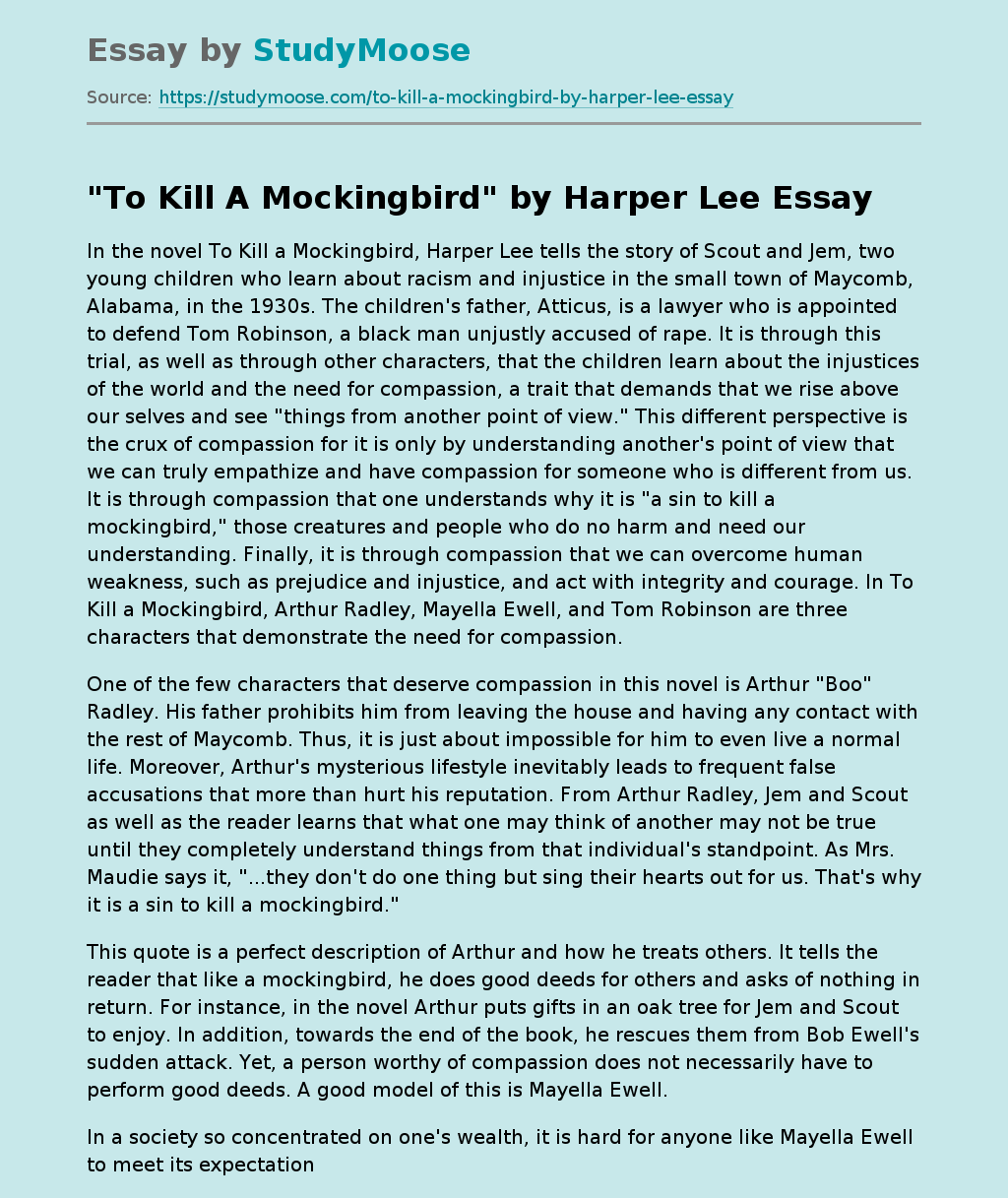