Time to Clear Our Conscience and Let All Men Be Free

“We may now consider this trade as having received its condemnation; that its sentence is sealed; that this Curse of mankind is seen by the House in its true light; and that the greatest stigma on our national character which ever yet existed, is about to be removed!” (William Pitt the Younger)

The Slave trade was a huge problem for William Pitt and an issue upon which he would give one of his greatest speeches. As the sun rose on April the 2, 1792, the debate of whether the slave trade should be kept legal or if it should be stopped, the British Parliament would start.

Don't use plagiarized sources. Get your custom essay on
“ Time to Clear Our Conscience and Let All Men Be Free ”
Get custom paper
NEW! smart matching with writer

After many hours though the agreement could not be reached, a fight between principled morals and currency, the men of the British Parliament, had to take aside.

Many members of the Parliament wanted to see Britain grow with wealth and thought the slave trade was a huge contributor to Britain’s wealth. Others wanted their thoughts, hearts, and conscience clear of the very bad act of ripping slaves out of their homeland and selling them as property.

The members of Parliament and the people who lawfully live in Britain could not be clear on which side of the matter Pitt stood on.

When it was Pitt’s turn to join the argument, He took the stand with a powerful speech that left people with no doubt, which side of the argument he stood. For instance, he started with the question, “Why should we abolish the slave trade when Great Britain has not abolished? Britain free as she is, just and honorable as she is, and deeply also involved as she is in this commerce above all nations, not only has not abolished but has refused to abolish.

She has investigated it well; she has gained complete insight into its nature and effects; she has collected volumes of evidence on every branch of the subject. Her senate has deliberated again and again and what is the result? She has gravely and solemnly determined to sanction the slave trade.

She sanctions it at least for a while her legislature, therefore, it is plain, sees no guilt in it, and has thus furnished us with the strongest evidence that she can furnish of the justice unquestionably and of the policy also, in a certain measure and in certain cases at least, of permitting this traffic to continue,”(Safire, 667).

From the start of the speech made by Pitt, we can know that he was more concerned with the welfare of human beings for his words were always condemning Europeans act of making slaves. For instance, he says, “That it is the opinion of this committee that the trade carried on by British subjects, for the purpose of obtaining slaves on the coast Africa, ought to be abolished.”(Safire, 657) This indicates that although Pitt was a European he hated seeing brutality and inhuman, which was being done to slaves.

Pitt demonstrates a lot of concern to humanity and its importance to both the Europeans citizens and also to all people living in Europe. None of the statements he made in his speech which showed him supporting the actions of his fellow Europeans. Indeed, he says to everyone that if the slave trade benefits slaves too, let it go on, but if Europeans are beneficial, then it is good to stop it.

By demonstrating Humanity, Pitt says in his speech, “We are friends,” say they, “to humanity. We are second to none of you in our zeal for the good of Africa, but the French will not abolish the Dutch will not abolish. We wait, therefore, on prudential principles, till they join us or set us an example.”(Safire, 667)

This again tells us that almost all the European Countries were in the struggle for partition of where the British and other Countries were buying and trading for slavery and the slaves suffered most.

Pitt’s uses of metaphors, allusions, and pathos during the speech, left the British Parliament in awe. Pitt uses metaphors to put the debates in perspective for the Parliament “We may wait; we may delay crossing the stream before us, till it has run down; but we shall wait forever, for the river will still flow on, without being exhausted,” (Safire 668).

Pitt was making the reference to the British ancestors who were looked at as thugs by Roman Senators many years before. The Leader of Europe in the Parliament’s eye, Britain was to be on top. Will looked upon them and said, “There are people that will never rise to civilization there are a people destined never to be free” (Safire 669).

The Romans allowed the British people to improve the fields of science and math to where they were. The slaves and the people of every continent are given the same rights to improve the world for not only themselves but for the world as a whole.

Pitt is suggesting the British parliament follow in the thinking of the Roman Senators and allows the slaves to be free people. “We have long since emerged from barbarism we have almost forgotten that we were once barbarians we are now raised to a situation which exhibits a striking contrast to every circumstance, by which a Roman have characterized us, and by which we now characterize where the British and other Countries were buying and trading for slavery “(Safire, 669).

To make his point stand out, more Pitt says, “Think of eighty thousand people’s carried away out of their country by we know not what means!”(Safire, 664). Pitt uses this sentence for plains that where the British and other Countries were buying and trading for slavery is the last of the entire world not to have their freedom.

All other continents were able to host free peoples. Where the British and other Countries were buying and trading for slavery has not yet been given a chance, and Pitt believed then was the best time to give them their first chance at freedom. Pitt’s excellent use of pathos, metaphors, and allusion are some of the main reasons his speech is remembered today. Pitt calls the slave trade a barbarous act.

He compares the Parliament to Roman Senators from long ago who did not keep their British ancestors as slaves. Pitt used his feelings and emotions to explain why he believed the slave trade should have been abolished. Although the Parliament would vote against abolishing the slave trade immediately, they did agree to abolish it a few years later.

Time to Clear Our Conscience and Let All Men Be Free. (2019, Nov 23). Retrieved from https://studymoose.com/time-to-clear-our-conscience-and-let-all-men-be-free-example-essay 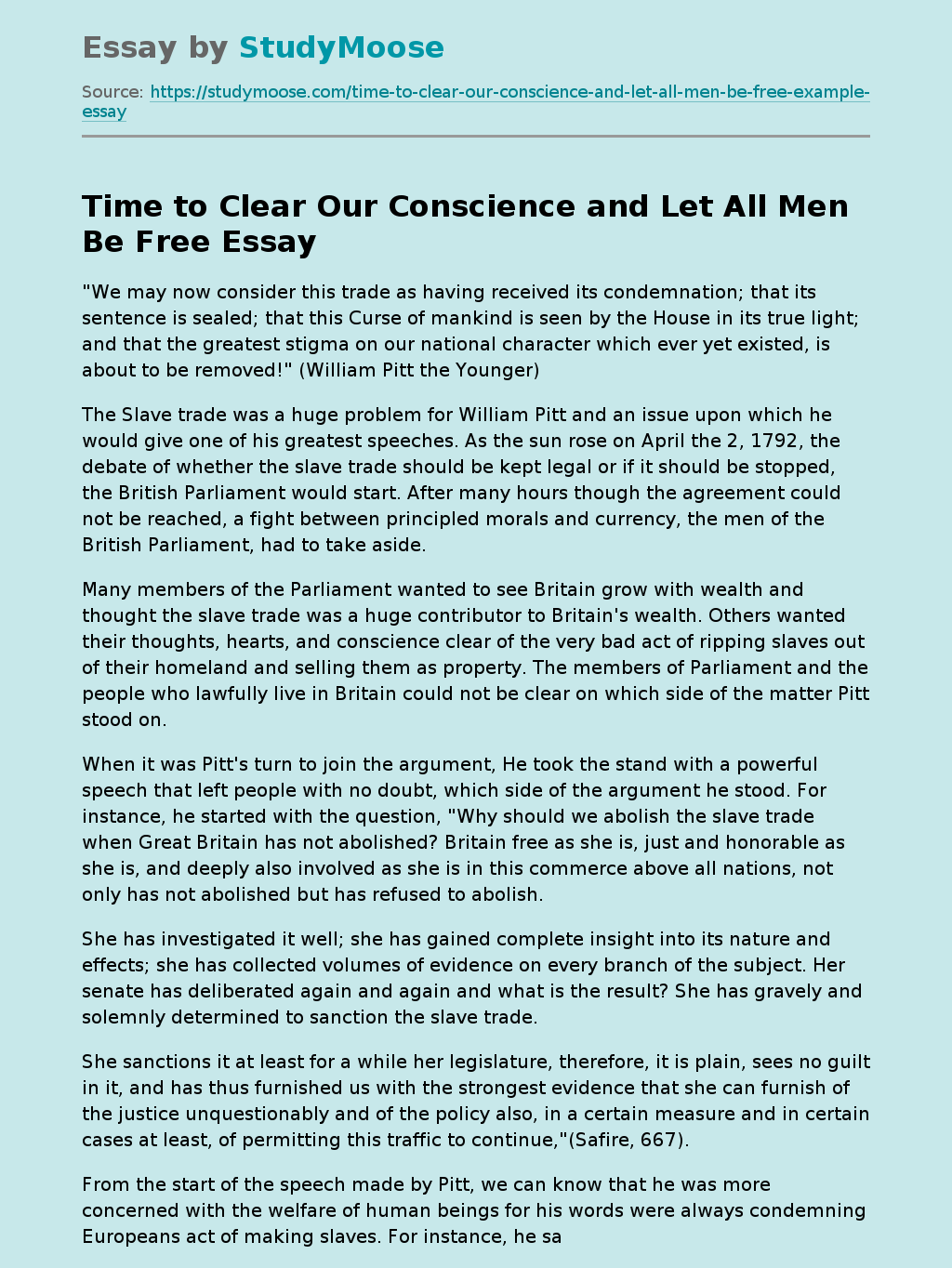