It is clear that some partnerships last longer than others Well

It is clear that some partnerships last longer than others. Well, when the inspired Serge Diaghilev originally paired George Balanchine and Igor Stravinsky, the impresario’s Ballets Russes once again, demonstrated that it was willing to take risks. Both Russian artists important to the West, together they defined neoclassical ballet throughout the 20th century by crafting an amazing creative relationship that spanned 50 years and ended with the creation of over 30 stunning ballets. Years later, it can now easily be said that Balanchine and Stravinsky are some of the truly greatest artists of the twentieth century.

Don't use plagiarized sources. Get your custom essay on
“ It is clear that some partnerships last longer than others Well ”
Get custom paper
NEW! smart matching with writer

Even Though Stravinsky wrote only a meer four scores for ballets choreographed by George Balanchine, the two legendary artists had a long and mutually productive working relationship. As each year proceeded, each new collaboration restored and strengthened their partnership. Many still wonder what was it about Stravinsky and Balanchine partnership that just clicked? How did these two artists manage to come up with a body of work that is still as vital today as ever? Igor Stravinsky was a Russian-born composer, whose work had a revolutionary impact on musical thought and sensibility right before and after World War I, and whose compositions still remain a criterion of modernism for much of his long working life.

Stravinsky was arguably, the most important composer for dance in the 20th century, all starting with a 1910 commission from Serge Diaghilev to score Michel Fokine’s Firebird. The premiere of The Firebird at the Paris Op©ra on June 25, 1910, was a dazzling success that made Stravinsky known overnight as one of the most gifted of the younger generation of composers.

During his teens Stravinsky thrived from the liveliness of St. Petersburg as well as the simple traditional melodies and rhythms of the lower classes singing in the fields. Such impressions would echo throughout the composer’s life. Stravinsky’s compositional career was notable for its stylistic diversity. The great choreographer, Balanchine recalled from his younger years the greatness of the rites and religious rituals he experienced as a young child. Balanchine’s early musical training at the Petrograd Conservatory of Music allowed him to engage with Stravinsky on a deep level. The lasting smell of incense, the sight of brightly colored gowns, and the magisterial pomp of high priests processing, all of these memories helped stem his choreography and gave him such great inspiration. He also co-founded the New York City Ballet and remained its Artistic Director for more than 35 years.Balanchine took the standards and technique from his time at the Imperial Ballet School and fused it with other schools of movement that he had adopted during his tenure on Broadway and in Hollywood, creating his signature “neoclassical style” Remains of such images are quiet apparent in his works Firebird and throughout Apollo and Orpheus. The artists were known to be intellectual soul mates as well.Both Stravinsky and Balanchine had Apollonian instincts; they favored order, structure, clarity, and restraint, wrote Larry Lipkis. Moreover, both were well read in the classics, and both were intensely interested in each other’s discipline (Balanchine was an accomplished pianist and conductor); thus, their friendship and creative partnership flourished in a felicitous meeting of minds and temperaments. Balanchine called Apollo, choreographed to Stravinsky’s score in 1928, the turning point in my life, describing what he learned from Stravinsky’s music. From Stravinsky, Balanchine said, he learned the trait of being satisfied with what one had made, once it was done, wrote Bernard Taper in his Balanchine biography. Stravinsky used to say his own model for this attitude was God, who on the days that he created lovely flowers and trees and the birds of the heavens was satisfied, and who was also just as satisfied on the day he created crawling insects and slimy reptiles. Beyond a shared ethnic heritage, both men were avowed classicists. Their embrace of protocol, discipline, and the beauty of order are evident in works as divergent as Danses Concertantes, Agon, and Monumentum pro Gesualdo. Yet their devotion to classicism did not discourage them from embracing unconventional and often unpopular views about the relationship of music and dance. Stravinsky spoke of a need for dance and music to struggle with one another. Choreography that achieved nothing more than mirroring the music would prove exhausting, he insisted. Instead, the composer urged a pushing and pulling between choreography and music; a jousting that would create a counterpoint of separate but interlocking visual and accoustic layers.Balanchine’s view of choreography took an opposing view.. A careful balancing of eye and ear was essential. He constantly aimed to strike a temporal and spatial equilibrium, as in Movements for Piano and Orchestra wherein intricately structured musical and choreographic elements are precisely calibrated and combined. And while Balanchine was quick to praise Stravinsky as the architect of time, he himself was no less aware of the structural principles needed to unite music and dance. Never would he allow dance to overwhelm let alone hide the music, especially when choreographing Stravinsky’s works. His unapologetic commitment to illuminating the composer’s score as a first priority was unprecedented. For many, it was also unregular. As one respected critic persisted, ballet music should provide nothing more than simple and in its classic form.. Elevating a musical score beyond its secondary role as background accompaniment would diminish dance’s expressive power. unorthodox or not, the insightful Balanchine’s less-rather-than-more approach to dance matched Stravinsky’s often complex music with seamless perfection. The artists shared histories, working methods, and artistic beliefs, were connected by an great respect, a mutual sense of humor, and both men’s genuine affection for one another, and it can’t be forgotten, a share of love for their art. All put together, these connections created a collaboration that would create a long lasting partnership as well as an enduring friendship. Their active collaborations ceased several years before Igor Stravinsky’s death in 1971. But even preceding his death, the composer’s music continued to inspire Balanchine (and others), as made truly clear the very next year with the historic 1972 New York City Ballet Stravinsky Festival. Brilliant new ballets including Violin Concerto, Duo Concertant, Symphony in Three Movements (all performed again this fall season in the same hall as they were premiered) confirmed just how extensive the span of the composer and choreographer legacy was. Indeed, that legacy continues to thrive. If longevity is a factor in measuring the significance of great works of art, then the Balanchine/Stravinsky repertoire surely meets the criteria. In every way, these ballets have gone the distance in proving extraordinarily durable. And like all masterpieces, they entrigue us to return to them regularly so that we may continue to unveil their timeless treasures. Stravinsky died in 1971 and Balanchine in 1983, but even posthumously their legacy continues to thrive, and their works remain as vital and relevant as when they were created.

It is clear that some partnerships last longer than others Well. (2019, Aug 20). Retrieved from https://studymoose.com/it-is-clear-that-some-partnerships-last-longer-than-others-well-essay 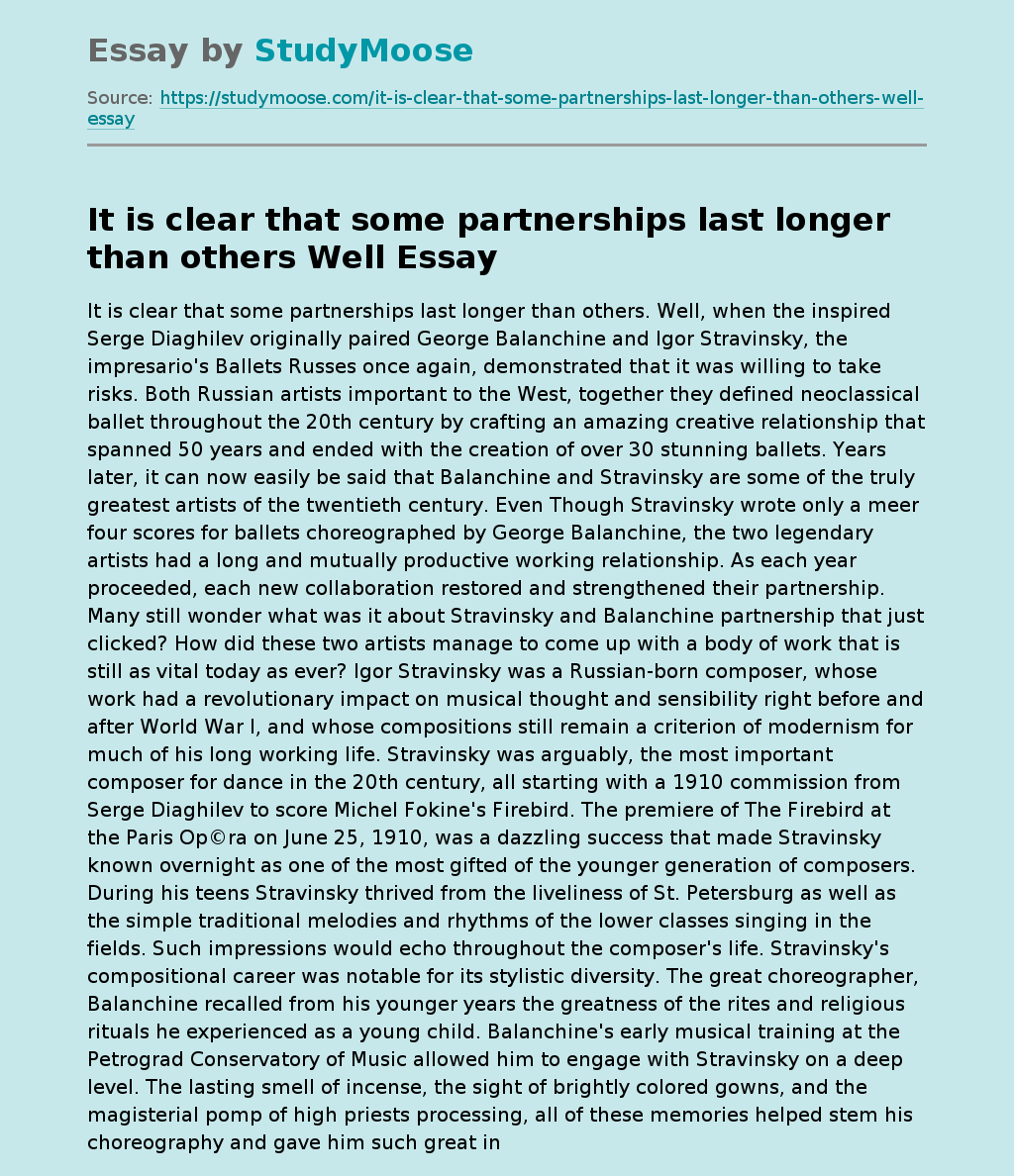