Time I Was Judged Unfairly

There was a time back in grade school when I was people had the unjust judgment of who I am as a person because I was a little different from everyone else. I have always been bigger in size than most people and that hasn’t changed today. I would wear different attire than other people because of the area I grew up in and the size of me. I would also be into hip hop music because of who I grew up with; however, I was the only one that only listened to hip hop because everyone was raised to not listen to the language they spoke in those songs.

Don't use plagiarized sources. Get your custom essay on
“ Time I Was Judged Unfairly ”
Get custom paper
NEW! smart matching with writer

When I was a kid and didn’t dress or look like everyone else it would be difficult for me to be included in some groups either out of fear by some of the smaller kids or flat out disgust at me being the biggest guy in the class.

I am still a husky guy to this day; however, I am going to try to cut down a lot because I feel in this society today you have to be thin or average to be accepted.

Unfortunately I have become less and less happy with my weight and appearance and it’s caused me to doubt myself and has hindered some of the better times of my life. There are always facts about America being the most obese country in the world and I see many health commercials that are concerned with child obesity.

I hated being judged because of my weight, especially when I was in grade school and it caused me to react in the wrong way by becoming a “tough guy”. This attitude I developed almost cost me my catholic education, despite this, I did find a way to just hold back and finish my catholic education.

The clothes I would wear would be all loose on me which again wasn’t the way everyone dressed in shirts that they said fit but to me seemed tight. On dress down days I would wear my baggy clothes and see the odd stares from classmates who wore there preppy clothes that fit and wasn’t that lose. The shorts I would wear would be a little ghetto in the sense they pretty far past my knees and I would rarely wear cargo shorts. There was an African American teen influence in my style because I would hang out with them at times in my neighborhood of Tacony. If someone made a remark about me I would get angry with them and shove them or do something immature which caused more people to judge me before they know me.

Being unfairly judged would dampen my mood a lot when I was younger because I took the judgments of others as me being wrong. I haven’t noticed any unfair judgment as I got older because I don’t think I really care much about it anymore besides my weight problem. Everyone that has matured from those days still make jokes here and there about things I may wear or my weight but I just try to laugh it off because I know I’ve come a long way since wearing the really baggy clothes and long shorts. I believe that in this society most of people very shallow because you rarely see a very attractive girl with a heavier guy or someone who dresses oddly, however it is the same way for guys who are the “typical” size and wear the dress clothes. I was unfairly judged when I was a kid and maybe I still am now, despite this, I find myself doing the same exact thing to others by being very shallow which I know I need to change.

Time I Was Judged Unfairly. (2017, Jan 02). Retrieved from https://studymoose.com/time-i-was-judged-unfairly-essay 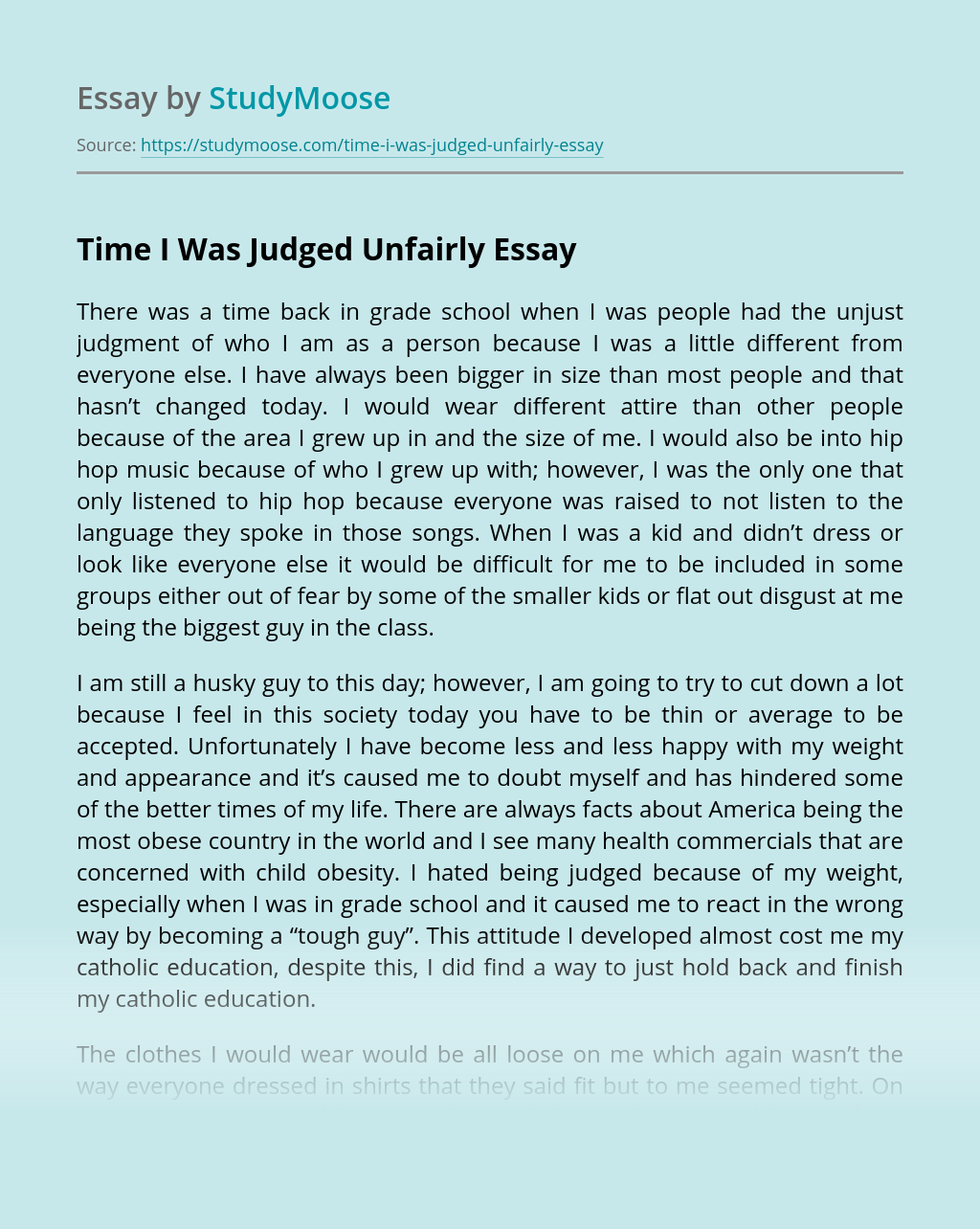