People have photo albums full pictures that capture the best moments of their lives. Some of these moments signify the passage of time, vacations, or memories they want to remember. The photos that I have represent the events that are significant to me. The three events that have had the greatest impact on my life are when I broke my arm, the first time I went on a plane, and when I moved to Eden Prairie. When I broke my arm is a significant event which has influenced and shaped my life.

Don't use plagiarized sources.
Get Your Custom Essay on Three Unforgettable Events in my Life Just from $13,9/Page

First, when I heard my arm crack in my wrist I was surprised. Then I was in shock because I would never have guessed that I would break it. It was the first time I ever broken a bone.

Although my mom was nagging me about drinking milk and that I was bound to break a bone, I guess she was right. Secondly, my family was at the hospital when I was getting surgery.

It was surprising that they all came because I broke an arm and I was getting a little surgery that only took an hour. It shows me how much my family cares about me. Another reason was because it was the first time I ever slept at the hospital. Finally when I broke my wrist, my mom stayed home from work. It shows how much she cares about me. It didn’t help physically, but it made me feel good emotionally when my mom came and she stayed home from work. When my mom did that it clicked in my head that she loves me.

To sum up, when I broke my arm was a significant part of my life and I will always remember every detail about that time. The summer of 2010 was the most significant summer ever because we went on two trips, to the Wisconsin Dells and to San Francisco. First, road trip to the Wisconsin Dells was one amusing event because we rented a car that summer and we drove there. It was the first time my baby cousin left the state; it was pretty cool. My mom was overwhelmed by driving so we stopped at McDonalds than my auntie drove the rest of the way: it was more fun than when my mom was driving. The music was on the highest level and we were dancing while sitting in the car. When we got to Wisconsin Dells my little brother’s go-cart got on fire while he was still in it, also his hair got on fire.

I was on the same track as he so I saw a person hit him in the back, which was against the rules I guess we now know the reason that is. Secondly, my first plane ride was when my sister and I were going to California. It was a big deal going on a plane for the first time and was on your own, which was pretty fun. When we went to San Francisco we went and saw the Golden Gate Bridge. It was fun walking on the bridge because it was very wind. I was so surprised it was so windy and breezy when and it was 101 degree. Finally while I was in California it was the first time my cousin let me drive the car around the block. It was extremely fun and scary at the same time.

I never knew that if you hit the gas pedal the car would go flying. To sum up, the summer of 2010 was significant because my little brother got his hair on fire, it was my first time on a plane, and the first time I drove a car. When I moved to Eden Prairie it was a significant part in my life. First, I was in 3rd grade so I went to Cedar Ridge. It was the first time I ever went to a different school then my brother. It was scary while but I got used to it. Secondly, we moved in to a house so I finally got my own room. We had more space in the house; I didn’t have to share a room with my sister. There were not any rules that I had to follow.

Lastly, I got a trampoline in my backyard I also got neighbors that were my age. To conclude this paragraph, when I moved to Eden Prairie when the first time it was that I ever went to a public school, and I got my own room. These events in my life are some of the significant parts of me. These events show and shape the person I am today. These events opened my eyes to the fact that I can do bigger and better things in my future. My goals are in my future is to see the world. Graduate high, go to college. I want to be the first person in my family to receive a doctorate’s degree.

You may also be interested in the following: unforgettable moments in my life

Three Unforgettable Events in my Life. (2016, Dec 10). Retrieved from https://studymoose.com/three-unforgettable-events-in-my-life-essay 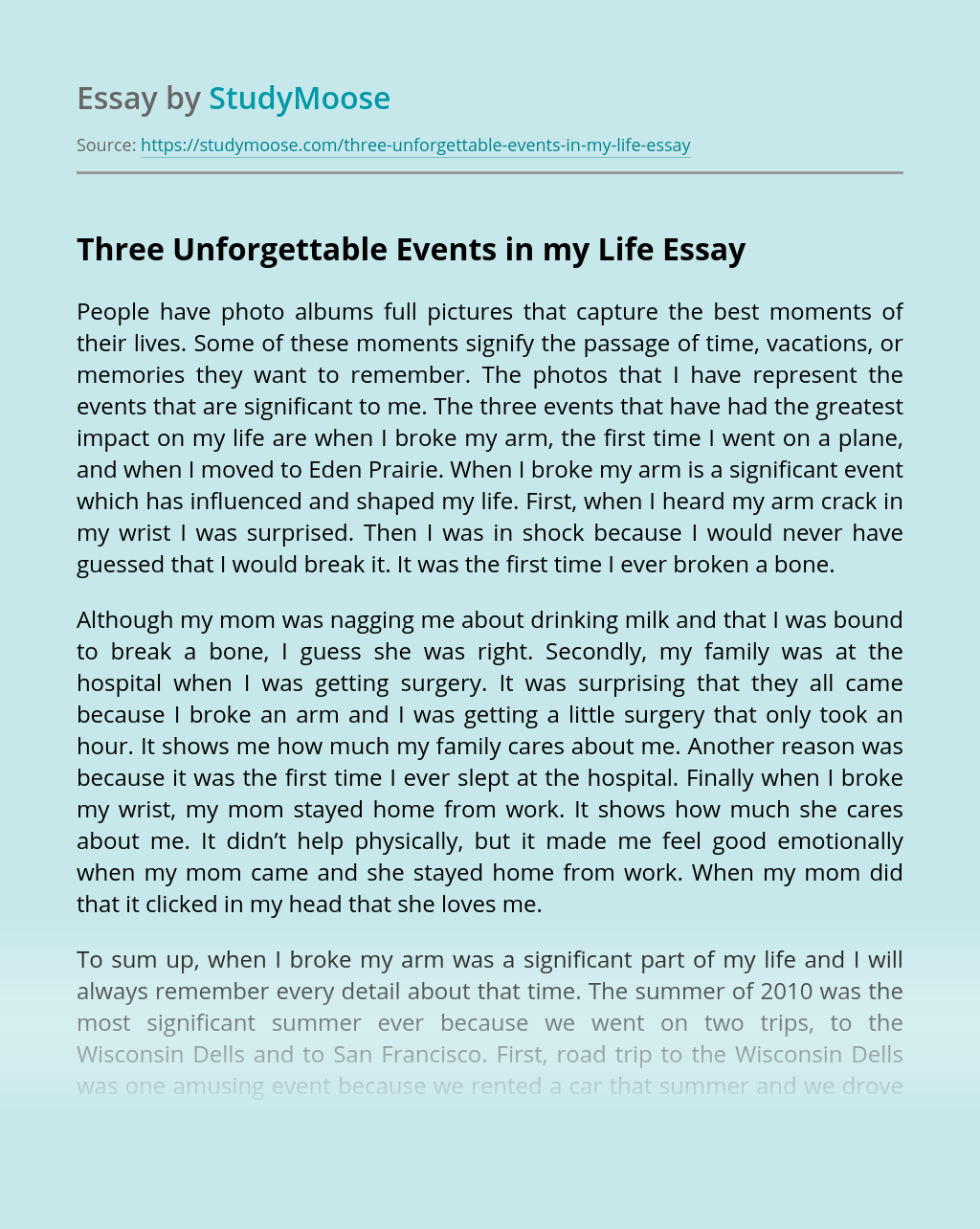 IntroductionPhilip Anderson is the Phoenix branch manager of Stuart

Introduction Philip Anderson is the Phoenix branch manager of Stuart & Co, which is a leading brokerage company in US. Philip is an experienced and talented manager in this industry especially in financial matters. Philip has start his career in the sales area right after he finished studying as an inside salesman for a cereal... VIEW ESSAY

View sample
The Case for the Defence

The story begins in the Central Criminal Court in London at the trial of Mr Adams, who is accused with what was dubbed the “Peckham Murder”; the murder of Mrs. Parkers who was battered to death in Northwood Street. Adams was accused of the murder when four witnesses saw him or someone with his appearance... VIEW ESSAY

View sample
Get Essay
Carlsberg Background and History in Malaysia

The Carlsberg Group is a Danish brewing company founded in 1847 by J. C. Jacobsen after the name of his son Carl. The headquarters are in Copenhagen, Denmark. The company’s main brand is Carlsberg Beer, but it also brews Tuborg as well as local beers. After merging with the brewery assets of Norwegian conglomerate Orkla... VIEW ESSAY

Anne Sexton’s poetic debunking of Cinderella is a dark comic version of the popular fairy tale. In it, she combines the Brothers’ Grimm tale with stories from modern society. In the poem “Cinderella” by Anne Sexton, she uses the stylistic devices diction, tone, symbolism, repetition, similes, and references from contemporary living to the Brothers’ Grimm... VIEW ESSAY

View sample
"Enchantress from the Stars" by Sylvia Louise Engdahl

The book I read was Enchantress from the Stars, by Sylvia Louise Engdahl. She was born on November 24 1933 LA, CA. She went to school to become an elementary teacher, and stayed in it for 1 year, then decided she hated it. She then became a computer programmer for the Top Secret SAGE air... VIEW ESSAY