The three macroeconomic goals of an economy should be economic growth, low unemployment/full employment, and low inflation rates

Turn in your highest-quality paper
Get a qualified writer to help you with
“ Three Major Macroeconomic Goals ”
Get high-quality paper
NEW! AI matching with writers

Low unemployment/full employment is when goods and services are produced through all resources. These resources primarily include labor, capital, land, and entrepreneurship. Lastly, low inflation rates are potential outcomes of economic growth and full employment and vice-versa. Economic growth is the yearly increase in production of goods and services, or also the change in the annual GDP. Economic growth is a major economic goal because it has in can result in various benefits for the economy.

Firstly it can improve living standards for people, consumers and businesses. 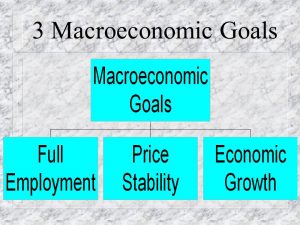 There has been a steady increase of GDP/GNP overtime. Another benefit from economic growth is the increasing amounts of employment. When goods and services are produced at such a high rate, companies would require more employees to help produce the goods and services. This is directly proportional to the full employment goal discussed below. Economic growth can also be beneficial to the government. According to Economicshelp.org, the government can highly benefit from the economic growth because of the excess of goods and services that allowed people to pend more, will allow the government to receive large amounts of revenue from income tax. According to an article in the financial post, Canada’s economic growth has decreased in recent years; this is primarily due to increase in prices or increases in inflation rates. Alberta and Saskatchewan though lead other provinces in economic growth. I believe this is due to the oil companies in Western Canada that have higher levels of production and greater resources that are being availed by a larger amount of employees. The second major macroeconomic goal is lower unemployment/full employment.

When a greater number of people are employed, it can vastly improve the production in an economy. This relates directly to the economic growth mentioned above. Lowering the unemployment rates has a number of benefits, according to an article by Casey Reader; one of the biggest benefits of full employment is `Mobilization of Resources’. This states that economies could become more sustainable and wealthy if they add more labor as possible, this would increase production and a larger amount of people would have income paying jobs.

But this increased after the recession, but Canada has recovered fast from the recession, though it is yet to reach full employment again. According to the article, it will take approximately 4 more years for Canada to reach that point, and in those 4 years the country may face the opposite of the benefits of full employment, ‘both households and governments rein in spending, leading to slower overall economic growth…’ (Flavelle, 2012). Low unemployment rates/Full employment can help economies in a number of ways; governments should really exercise the option of hiring more workers and take advantages of the various benefits.

Lastly, low inflation rates along with economic growth and low unemployment rates add into the equation that results into a healthy economy. Compared to the other major goals, lowering inflation rates also has its share of benefits for the economy. According to the Bank of Canada, Low inflation rates help the purchasing power of money to stay consistent, allowing ‘consumers and businesses to make better long-range plans…’ (Bank of Canada, 2009). This is a good thing for small businesses especially; this increases their chances of surviving in the competitive business world.

Bank of Canada also states that low inflation rates ‘lower nominal and real interest rates’ (Bank of Canada, 2009). Since real rates is the ‘lending interest rate adjusted for inflation…’ (The World Bank, 2012), a decrease in real rates would decrease the amount of borrowing borrowed money (also called cost of borrowing), which will allow consumers to buy products and services that are more durable, and businesses can now invest safely and easily (Bank of Canada, 2009). In recent months, Canada’s inflation rates have decreased vastly, after a major increase in 2011.

The chart below portrays the change in inflation rates from January 2011 to July 2012. According to the Bank of Canada, “Inflation-control targeting has been the cornerstone of monetary policy in Canada since 1991…” (Bank of Canada, 2012). The inflation rate is measured by the year-by-year increase/decrease of the Consumer Price Index (CPI). According to Stats Can, in the last 12 months, the inflation rate for Canada grew (as portrayed in the graph above), everything except footwear and clothing increased in prices. This may be due to the major increase in gas prices in the last few months.

According to the chart above, Canada’s inflation rates have vastly increased, this links back to the economic growth and more job openings for people. In conclusion, the major macroeconomic goals should be economic growth; low unemployment rates/full employment and low inflation rates. Quick reviews of some of the benefits these goals provide are, Economic growths can help improve living standards due to the high production of goods and services. Secondly, full employment can help business ‘mobilize resources’ and by hiring more employees to produce more goods and services.

Lastly, lower inflation rates can lower nominal and real interest rates that decrease nominal and real interest rates; this reduces the cost of borrowing. In conclusion, I believe that each of these goals is interconnected with each other. Economic growth is very important for our economy as of now; Canada is in a stage of economic growth, with more job openings for people as of late and prices decreasing at a good rate. Canada and other economies should focus on these three goals to help improve their economy and help improve their country.

Related Essays
Turn in your highest-quality paper
Get a qualified writer to help you with
“ Three Major Macroeconomic Goals ”
Get high-quality paper
Helping students since 2015
Stay Safe, Stay Original