How did the Romans run their economy?

During the modern world of Rome, their economy increased and decreased significantly but at different times. Romans ran their economy by social status and cultural changes (e.g. laborers), innovation of crafts and tools, production in trade, imperial and political systems, law and legal institutions. During the Black Death, economic demographics declined majorly, which left Rome barely getting by and trying to get back on its feet. It was not easy for them, but over time they were able to overcome this hardship.

Don't use plagiarized sources. Get your custom essay on
“ How did the Romans run their economy? ”
Get custom paper
NEW! smart matching with writer

There are details that I have found entailing about the Roman economy, but there are no real evidence of any official records backtracking to their time.

To begin with, social status and cultural changes was highly looked upon and marginalized. It is said that it was the rise of European modernity. Technology, construction and pottery did not exist any longer after the fifth century CE. After this, there was a slow process in getting the economy back up through commercial growth.

Many laborers were hired to work in agriculture, which was the only thing for investment and a source of wealth. Soon enough, raw wool was then discovered and was considered the world economy supplier. They traded with very well- known manors and elites which were huge suppliers of raw wool. Foreign countries like Italy and Germany were also trading with them because they were known as brokers for cloth-producing distributions. Fine wool cloth then surfaced and benefitted many social sectors. Social change required new notions of property to be private to individuals and their families, corporations and other voluntary associations (Kerridge 1986: 121).

With that, there was an increase in population growth, market economy, material in standard of living, urbanizations in small towns.

In addition, a simple model in the Roman economy which was considered underdeveloped in preindustrial economies was the progress in how far something will last. Investments in manufacturers were usually low so many did not invest in it. Without any workers, manufacturer companies would go out of business. Manufactured goods did not make any profit, only crafts and tools. There were not many smart people who can seek opportunities in a field to make any sort of large-scale profit in manufacture and risk-taking in investments. It was one or the other. This was something that they were not strong in. In ancient Rome, the small-scale handicraft industry was predominant (Garney, Saller, Elsner, Goodman, Gordon, Woolf 2015: 72). Most of the things that they made had good quantity, notably, pottery and textiles. So much positive outcomes with handicrafts with little money used for the product. They were always making a profit and staying afloat but it wasn’t always as good depending on the market.

However, the transport of trade was slowly getting there. It costed more to transport goods than to make them. So, they mainly used water transport because it was cheaper and faster. But it wasn’t always fast depending on the weather or season. In the nineteenth century, they then invented the steamboat which sped up moving and transporting goods. They traded with countries such as; Syria and Asia which was a large-scale trade in geography and history. Asia was in constant trade compared to the Gaul. With the power of trade in and out of the Empire within different places and regions it was a significant part in the economy. As Hopkins acknowledged in putting forward his own model, there is more than one way of approaching the problem. The two approaches are not ‘pure’, and it is premature to attack one approach simply because the other has commended itself (Levick 182).

Therefore, the Roman Empire is running by political systems. They can get surplus from different economies such as; military and communications technologies. Roman’s economic system were covered by land, credit and agriculture produce. Exchange overseas is important because it helped expand their clientele among different areas. First, that the political economy, together with the transport of private produce by its owner for their own use, might account for most long-distance exchange within the Roman world (Whittaker 1985). Second, that the operation of the political economy might also stimulate some other long-distance exchanges within the empire (Hopkins 1980; Wickham 1988). Third, that the existence of the empire might in various ways to facilitate the limited growth of a mercantile economy (Carandini 1986). Fourth, that long-distance exchanges derived from features of the ancient world as a whole, such as urbanism and the uneven distribution of resources, and even the imposition of empire did not create an integrated economy (Duncan-Jones 1900: 30-50). All these authors argue the same position as to why it is important to trade long-distances.

Similarly, law and agency is important in the growth of Roman economy. By having a tutor, it helped them with difficulties when they came across problems that they did not understand. Tutors could invest in the pupil’s money, and be considered as a stable income. Later, the tutors could then purchase land with the funds. Previously, I have argued that the responsibilities that the Roman legal authorities imposed on tutors in administering the property of pupils stemmed from a cautious approach to financial decision-making characteristic of upper-class Romans (Kehoe 1997). If the tutor could get a hold of land, he/she could then lease it out. Tutors were under covered agents for managing a small portion private property in the Roman Empire. Two important things of the law contract were that one, tutors needed to understand their job and what they are doing and secondly, the penalties if they breached the contract. If they breached the contract then they would be help reliable for criminal liability.

Furthermore, with the knowledge of law in Roman society, it helped them understand the difference between the law and the economy of the Roman empire. It protected the property of underage orphans and the relationship between the principal and agent. The purpose for this was to gain wealth from property ownership and achieve personal goals. These were the basic structures of Roman society and upper-class economic interests. But the law of tutorship was not developed to serve an economic policy, but to achieve a social goal, with costs imposed on the economy as a whole (Ogilvie 2007, earlier Rutherford 1994). It wasn’t a huge amount of wealth in property ownership that eventually they could run as town councilmen or women around the Empire.

To summarize, the Romans ran their economy in many ways to stay afloat from economic and social status, to innovation of crafts and tools, production in trade, imperial and political systems, law and legal institutions. The only job that was available for laborers was work in agriculture. Raw-wool was the economy supplier. Many people were smart to not invest in huge manufacturers because innovations of crafts made a huge profit. Most of the things made from home had good quantity and quality, which didn’t cost very much to make. This was how they made a profit. After the invention of the steamboat, trading overseas and different regions was efficient. By trading long-distances, it helped built up their clientele which then brought in more customers. The Roman Empire was very smart, that they built relationships with business people in land, credit and agriculture. Also, law and agency was important to the Romans. Tutors bought and invested their money in pupils, which then bought land and later leased it out. This helped them understood the law and economy of the Roman empire, which gain wealth from property ownership. In the end, they would be involved around the empire and have a steady income.

How did the Romans run their economy?. (2019, Dec 05). Retrieved from https://studymoose.com/how-did-the-romans-run-their-economy-essay 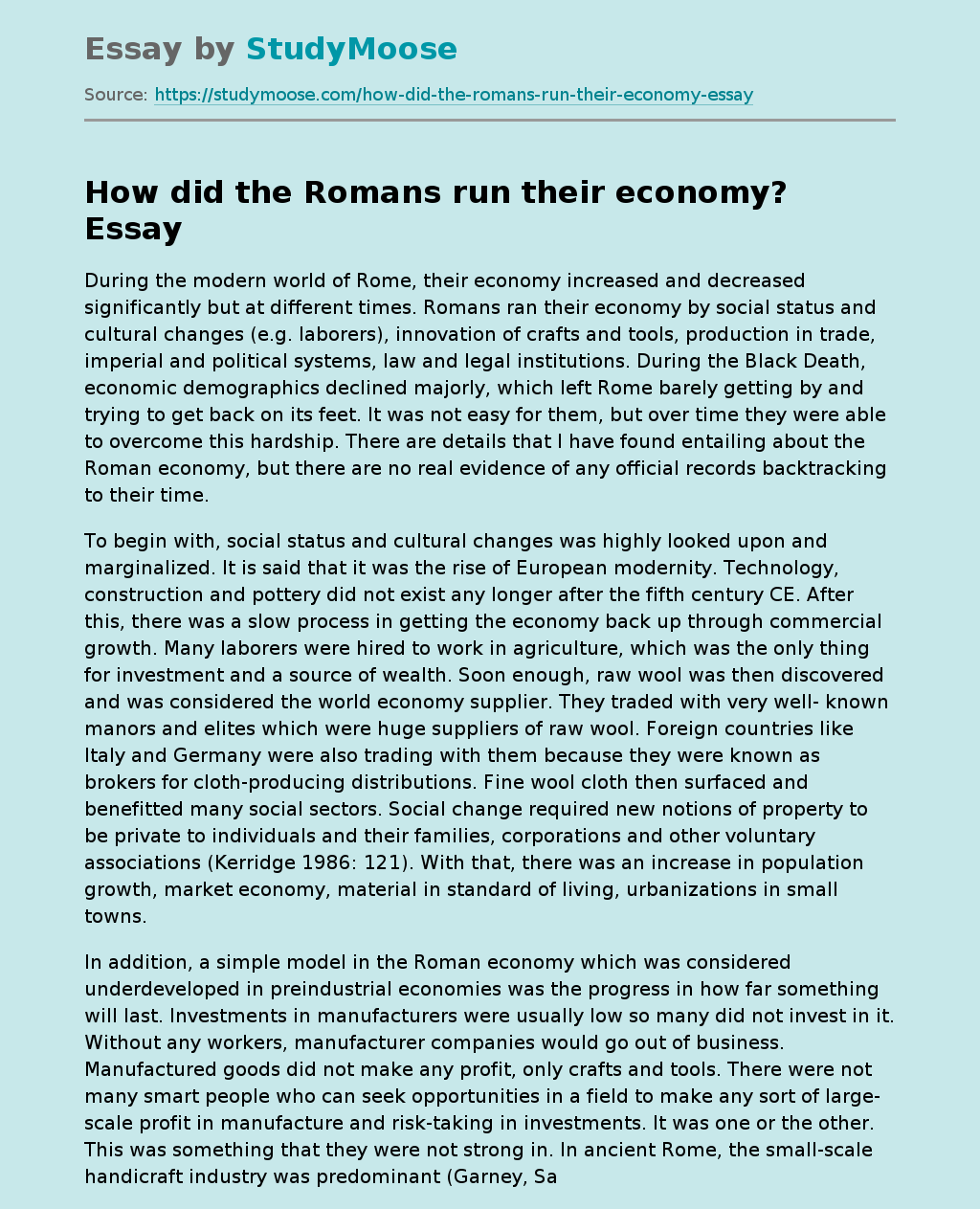