Romans 1-8 gives us a foundation for a Biblical Worldview. It gives us a foundation for the natural world, human identity, human relationships, and culture. Paul addresses these subjects while speaking on the wrath of God by warning us of what will happen if we turn away from the Lord. However, he also addresses how we can attain peace with the blood of Jesus. Biblical worldviews differ from those of the secular world. A Biblical Worldview which based on God’s truth and the Holy Bible which directs our life in the world.

Don't use plagiarized sources. Get your custom essay on
“ Biblical Worldview Essay ”
Get custom paper
NEW! smart matching with writer

Therefore we have evidence of the truth by what is written in the scriptures. They are both very important views because the can shape our beliefs about God, our creation, our humanity, and our purpose in life.

In Genesis 1:1 it talks about God creating the earth. There is not only evidence all around us of the beautiful things that God has created, but there is scriptural evidence as well.

Romans relates to the natural world with a biblical worldview, as well. Romans 1:20 states, “For the invisible things of him from the creation of the world are clearly seen, being understood by the things that are made, even his eternal power and Godhead; so that they are without excuse” God has made himself known by the splendor of creation. There is no reason or excuse that one would not believe that God is the creator if the Natural world.

In Genesis 1:27 we are given an example of what this means to be a human.

God cares about all of his creations, but cares most about humans; he gave us a great responsibility to care for his creation. Furthermore we have been created to glorify the Lord and to live in relationship with him. Paul describes human identity in Romans 3 and 8. In Romans 3:10 Paul establishes the sinful nature, or identity, of man by saying, “None is righteous, no, not one.” Not only is mankind unrighteous, but Romans 3:11 says “no one understands; no one seeks for God”.

A biblical worldview recognizes that man does don’t encompass the ability to understand God and consequently views man’s identity as totally corrupt. Fortunately, Paul reminds us in Romans 8:30 of future glory by saying “and those whom he predestined he also called, and those whom he called he also justified, and those whom he justified he also glorified.” This discovers the character of man and presents a hope of redemption that would otherwise be unattainable and even undesirable, due to man’s immorality. Through being called and justified by Christ, man’s identity is changed and we can now have live in relationship with Him.

We as humans will seek to do whatever brings us pleasure. We are selfish and sinful by nature. In Charles Tinsleys Blog he says, “Human nature had become engulfed in a sinful state in an act of rebellion and denial of the Creator.1” Although sin sets us apart from God, the Bible tells us that our relationship with God is restored because of what Jesus did. Romans 5:12-20 gives us the outline of how we are restored to God. God created us in His image. So when it comes to human relationships we are to value others as God values them. The Bible commands us to love our neighbors.

We were fashioned for fellowship. This is not limited to just our small groups, our Church family, and our saved friends. We were created to build relationships with those, even the non-believers. We should love each person with the love of Christ, despite cultural differences. Paul talks about how the Jews cared for the law so much that they rejected the Gentiles. They did not feel as though they were worthy (which ultimately none of us are) enough to be redeemed by God and that they could not be justified.

In Romans 3:28-30 Paul says, “Therefore we conclude that a man is justified by faith without the deeds of the law. Is he the God of the Jews only? Is he not also of the Gentiles? Yes, of the Gentiles also: Seeing it is one God, which shall justify the circumcision by faith, and uncircumcision through faith.” We have all been in situations where we have interacted with non-believers and those from other cultures. We are still called to love and treat people justly and with respect. So a Biblical Worldview on culture is valuing and viewing others how God does because He created all mankind.

I love the book of Romans. It truly is and always has been one of my favorite books of the Bible. Paul’s letters to the Church (the body of believers) are still so relevant today. Romans 1-8 shades an outstanding representation of a strong biblical worldview in relation to the natural world, human identity, human relationships, and culture. Not only does Paul provide us with details and instructions concerning these topics, but too many others as well. I consider Romans to be “Christianity 101” because there really is so much to learn in these letters about what it means to be a Christian and to truly follow Christ. 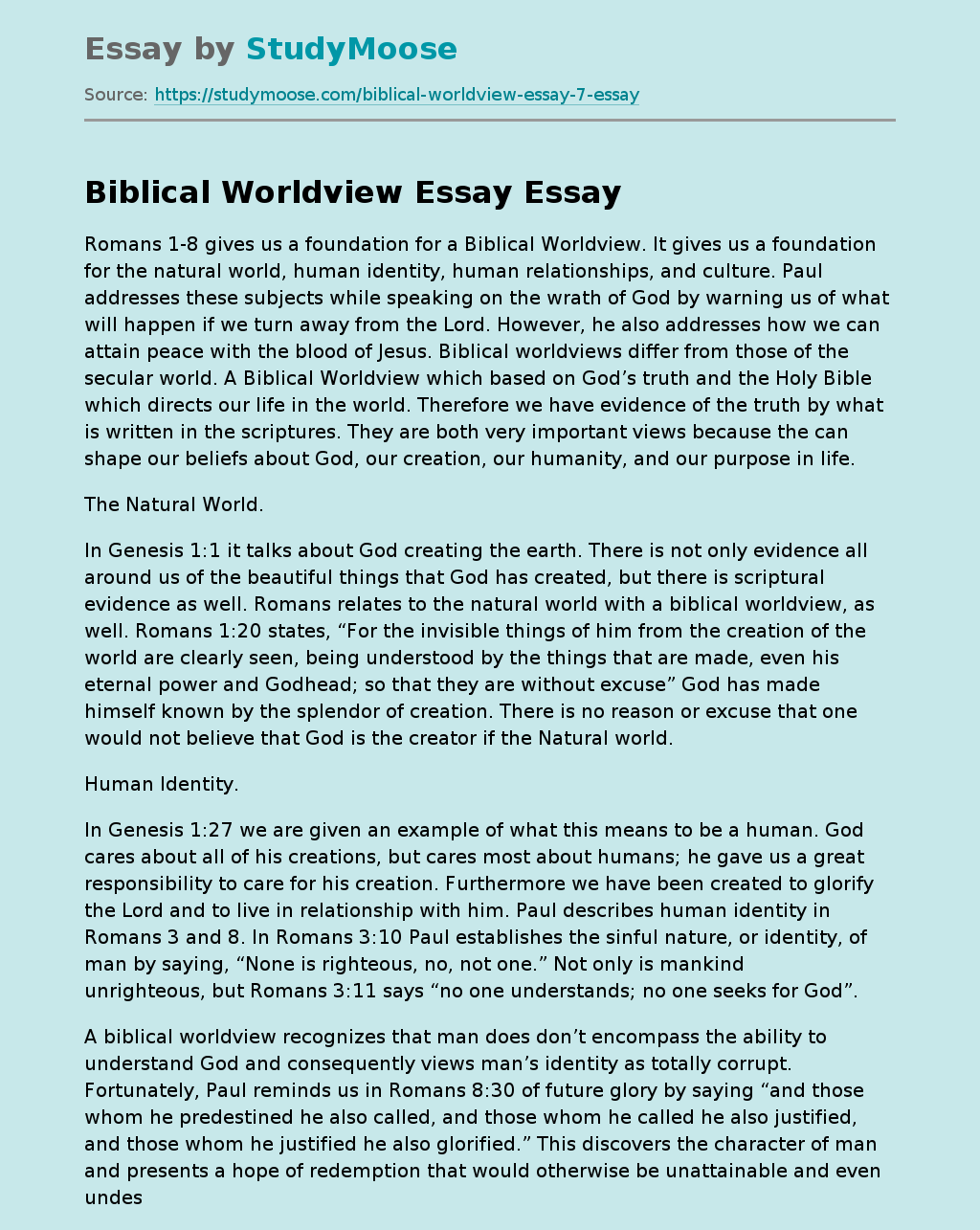