This Is What It Means To Say Phoenix Arizona Setting Analysis

The story This is What It Means to Say Phoenix, Arizona by Sherman Alexie is the story of a journey taken by Victor and Thomas Builds-the-Fire after the death of Victor’s father. Thomas Builds-the-Fire, the town storyteller, is the last person Victor, a man down on his luck, would have chosen to travel with him, however, the memories they share along the way makes their time together unforgettable. Alexis uses the shared life experiences of the main characters, Victor and Thomas-Build-the-fire, to bring them together while showing the struggle of modern Native Americans, and how an act of kindness can greatly impact someone’s life.

Don't use plagiarized sources. Get your custom essay on
“ This Is What It Means To Say Phoenix Arizona Setting Analysis ”
Get custom paper
NEW! smart matching with writer

To begin, Victor has both lost his job and received the news of his father’s passing all in the same day. With a lack of money to afford the trip to retrieve the belongings from his father Victor, accepts an offer from Thomas Builds-the-Fire to pay for the trip with the stipulation of accompanying him.

His own feelings towards his father are more conflicted he felt abandoned and estranged from his father after he left their family but now is feeling grief knowing he is gone. Thomas also shares that his mother’s death when he was born. Sax writes in an article analyzing the story that “Even though Thomas’s mother died in childbirth, and he was raised by his grandmother, he knows the loss that Victor feels in losing even an absent father” (Sax 1). The knowledge of the shared experiences gives insight to why Thomas wanted to make the trip with Victor.

Furthermore, this story brings to light the struggles the Native American culture face. Candace Andrew writes of those struggles stating “ references to the BIA, Thomas Builds-the-Fire’s HUD (U.S. Department of Housing and Urban Development) house, poverty, alcohol, and the reservation underscore the tragic history of the Native Americans’ interactions with the U.S. government and their psychological consequences” (1). Thomas Builds-the-Fire is affected by the consequences more than others he’s resentful to a country that has oppressed his people while being rejected and ridiculed by his own people for his strong ties to the ancestors and nature. Obviously, racism plays a role in this story with the race of the characters always specified and the main charters are referred to as “Indians” as though they are less than because of their race.

While sharing memories along the way one that sticks out the most when Victor’s father who showed kindness to Thomas when he was in need in exchange for watching over Victor. The stories Thomas tells always end positively and he sees the good in people. Without Thomas, Victor would not have been able to get to his fathers belonging and Thomas offered that despite Victor treating him poorly. Richard Sax writes “Thomas’s money and companionship are freely given to Victor in order to care for him in this literal, physical passage toward adulthood” (1). The selfless act by Thomas Builds-the-Fire shows true goodness without return.

In conclusion, the journey together created a new bond for the two old friends over the new shared memories and experiences. Victor needed the trip with Thomas Builds-the-Fire to have time to come to terms with the grief from the loss of his father and do that with someone who had experienced it. The story shows the raw struggles of Native Americans and how they view themselves and how they have been treated. Thomas Builds-the-Fire has given Victor a gift that is truly priceless and with hopes of a positive impact on his life. Through this journey, these two share a new found bond and a story to add to Thomas Builds-the-Fire collection to share for a lifetime.

This Is What It Means To Say Phoenix Arizona Setting Analysis. (2020, Oct 11). Retrieved from http://studymoose.com/this-is-what-it-means-to-say-phoenix-arizona-setting-analysis-essay 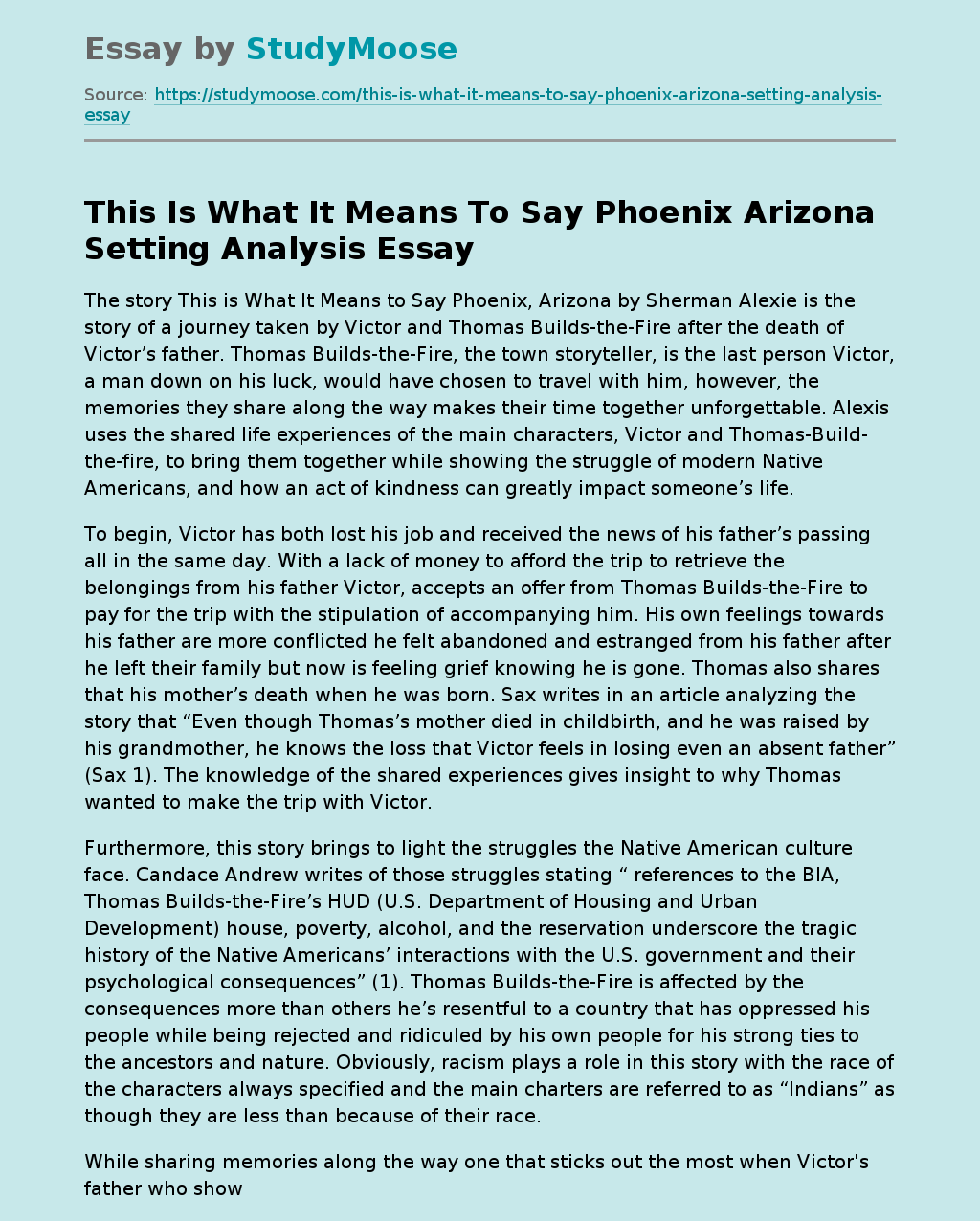