The Importance and Benefits of Diversity

Cultural diversity, or multiculturalism, is based on the idea that cultural identities should not be discarded or ignored, but rather maintained and valued. The foundation of this belief is that every culture and race has made a substantial contribution to American history. However, many people remain opposed to the idea of multiculturalism, or cultural diversity awareness, while others often support it and yet have no clear idea of how it should be taught.

The diversity of the United States is truly astounding, as many different ethnic and racial groups have contributed to the social, economic and cultural values of our society.

This has certainly been true throughout our history, even though many of our school books have not always taught that fact. In fact, the very idea that cultural diversity should be taught has only been promoted in the last few years. The bottom line is that when we fully recognize that America is great because of the contributions of the many, we as a people will be even more united in our common goals, and even more proud to be American citizens.

When it comes to the dimension of cultural diversity, it can be identified with four main types of minority groups which help describe many of the dimensions of cultural diversity. The first group, racial, is based on physical differences that are obvious to the observer such as skin color, hair color or facial features. Ethnic groups are those based on a person’s origin or cultural patterns. The third group, religious, differentiates individuals based on their association with a certain religion and the fourth group is based on a person’s gender.

Other dimensions of diversity include a person’s age, sexual orientation, health status and gender. Although there are all types of ethnics groups, the ethnic group that I identify with most is African American, one hundred percent. Culturally I was born and raised in the United States but growing up I have stayed in different places like Germany when my father was in the military for twenty years. I do think that being from a military family, I found myself in another circle that shares common traditions and beliefs.

I am a Christian and I believe that God is the creator of all. I think that my ethnicity plays into my culture and traditions. For example we all think that we have to prove ourselves to others just because we need to prove a point. Really we are equal in front of god. In addition I am mother of one so the other circles, the circles of moms. I think that African American people are fun to hang around and easy to sometimes talk to. I like that African American people can have fun but at the same time be serious when the time permits it.

The word benefits of diversity represents a large group comprised of different people with different experiences. These differences include race, color, religion, gender, national origin, sexual orientation, age, disability, veteran status or citizenship. However, “diversity” does not address how these different people function or work. Inclusion enables us to strive to have all people represented and make all members, partners and employees feel welcomed and valued, not only for their abilities, but also for their unique qualities and perspectives. The concept of diversity encompasses acceptance and respect.

It means understanding that each individual is unique, and recognizing our individual differences. These can be along the dimensions of race, ethnicity, gender, sexual orientation, socio-economic status, age, physical abilities, religious beliefs, political beliefs, or other ideologies. It is the exploration of these differences in a safe, positive, and nurturing environment. It is about understanding each other and moving beyond simple tolerance to embracing and celebrating the rich dimensions of diversity contained within each individualCachedYou +1’d this publicly.

Undo. Everything that we do as a people should be done a hundred percent and also we should work hard to bring attention to diversity and inclusion in everything we do not only because it makes sense, but because it’s the right thing to do. The benefits of diversity training is a fundamental component of a diversity initiative and represents the opportunity for school districts to inform and educate administrators and teachers about diversity.

The purpose of training is not only to increase awareness of workplace diversity, but also to develop and enhance skills among employees to help them communicate more profoundly in the future. Differences in race, sexual orientation, education and work experience can cause tremendous damage. Although diversity training cannot all together change individuals’ beliefs, it has the ability to increase awareness, impart knowledge and educate employees further on how to accept differences among fellow employees.

The importance of benefits of diversity workplace training and the main goal of a successful diversity training program is to create a positive work environment by helping employees recognize and be tolerant of differences among co-workers. When it comes to an experience with workplace culture, I have yet to have any problem culturally thus far. Could there be, or could there have been, yes. I have been working at a daycare now for the last past two years, so every day, all the time, I, myself as well as other have to deal with a lot of cultural diversity and also inclusions.

I think there could have been times where things could have gotten worse but when inside a place of business I try to conduct myself in a way that makes other people more comfortable to or with me. I have to do my job as an instructor to be sure that all parents are comfortable enough with me with their kids whether the kids are white, black, tall, short, Asian, Hispanic, Black, etc. when it comes to my job, in my eyes, every child is different but at the same time know that we all are equal and not one person are better than the next.

The Importance and Benefits of Diversity. (2016, Sep 09). Retrieved from http://studymoose.com/thinking-about-diversity-and-inclusion-paper-essay 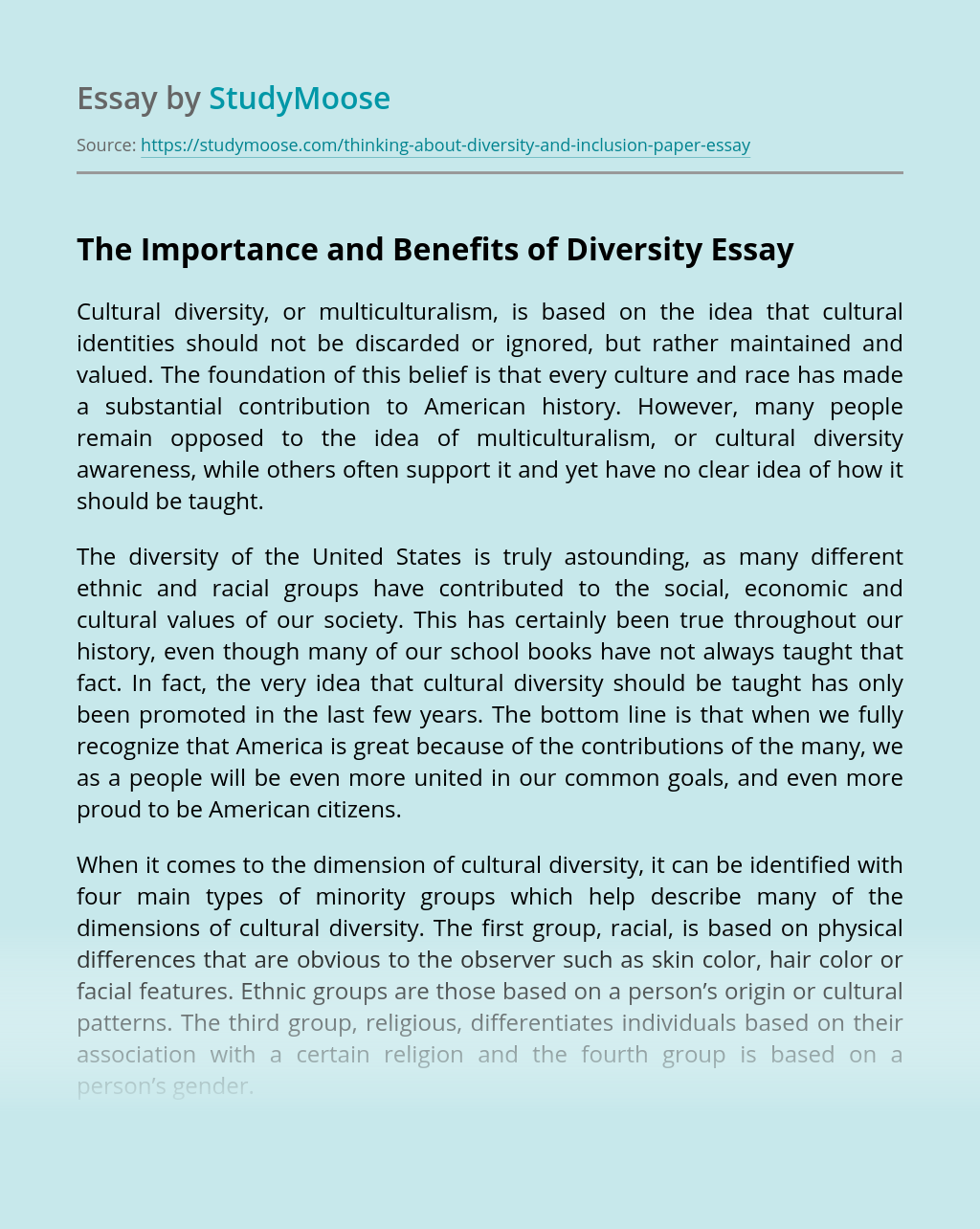 Don’t waste time
Get a verified expert to help you with The Importance and Benefits of Diversity
Hire verified expert
$35.80 for a 2-page paper
Stay Safe, Stay Original