The Thickness of Ice and Twice Shy

Paragraph one talks about the beginning of a relationship and how you don’t really care about what may happen and about whom might get hurt in the outcome. This one is mainly about the meeting and greeting of the two people in the poem. The hope that will become close and get to know each other and learn to trust like you do when you’re on a ice rink. Ice skating is all about trust and giving a chance and this is what the two people do in the beginning.

Don't use plagiarized sources. Get your custom essay on
“ The Thickness of Ice and Twice Shy ”
Get custom paper
NEW! smart matching with writer

The repetition of “hope” is very prominent in this poem as they are really hoping that will get to know each other.

“Though secretly I’ll be hoping we’ll become much more than friends and hoping that you’re hoping it too. ” This statement is also in brackets which are shown as thoughts of the first person speaking. This use parentheses is very vital in the poem as it is used throughout the poem to let us know on the thoughts of the two people that they themselves don’t know what each other are thinking.

This could be classed as secret and something that only we know so it draws us into the poem more than we would expect to be drawn into.

The second paragraph is about how the relationship turns to trust and testing each other. In this paragraph Loxley uses an interesting simile to compare the relationship to ice skating; “at first we’ll be like skaters, testing the thickness of ice”.

Loxley shows how the early stages of a relationship are risky as we are vulnerable. “Testing the thickness of ice”, suggests that at the beginning of a relationship we want to push the boundaries a little. She also uses the quote, “we’ll skate nearer to the centre of the lake”.

Important part of the poem

The fourth paragraph is about how the relationship becomes unsteady and how it stops them being together. The quote, “the creeping cracks will be ignored” shows that they never noticed that their relationship was turning bad and that one or both of them was going to get hurt in the outcome. They stopped caring and noticing what was happening and now they are going to end up alone without each other. The second quote in this paragraph that I feel has a big part in this is; “we will scramble to save ourselves and not each other”.

This is a very important part of the poem as this is part when the two people become selfish and childish and don’t care about each other as much as they should. This is a huge part in the poem and makes us realise that even though everything’s looks ok, it might not be and might end up hurting you in the end run. Paragraph five shows us that they meet as strangers again and try to start a new. “Though secretly we’ll be enemies”, show us that they still don’t forgive each other for what happened and that they can’t forget what happened between them. This is a sign that they were in lust with each other.

This paragraph also shows they have slowly tried to move on by using the quote “missing out on a medal and jealous of new partners”. This shows they still haven’t forgotten each other and still have feelings for each other so gives brings a positive side to the poem which makes us think that they might have second chance at things. The last paragraph shows that they have made up and become friends again. One quote in this is; “hoping to break the ice again… ” I think this is ironic as they were both hoping at the beginning to be together and be happy and the ice “broke” for them and ruin everything.

The end of the poem

The poem ends on a positive note having gone round in a circle of how they met, fell in love, fell out, and split and still were able to put the past behind them and hopefully become friends again… Twice Shy is a poem about two people who meet and have feelings for each other but unlike the last poem they don’t rush into things and take it slow. The main themes in this poem are love and stability. Both poems have the theme of love but one is more about lust and the other is about stability. I think Heaney probably read about a story similar and decided to write this poem from that experience.

It doesn’t sound like it came from a personal experience so I think he wrote it from that way instead of something he has experienced firsthand. This means these two poems were written with different intentions as well for different reasons. The first one was written to warn us of how a relationship can go bad at the slightest thing, where-as this one was written with the intention of warning us that if we might, things might turn out better in long run. The title of this poem gives a negative vibe.

“Twice Shy” is a fairly negative title for a poem that would suspect to be about love and trust. This comes from the saying; “once bitten twice shy”. I think that Heaney was trying to make us remember that some people get hurt in past relationships and that makes them feel nervous about going into another relationship encase they get hurt again. I think that the speaker of the poem in Heaney but this poem is a third person poem which means that he isn’t writing this from him and that he is writing it about someone else’s feelings towards someone else.

I think he finds it easier that way instead of writing it from an experience he has possibly never had. These two poems have a lot in contrast. One is about the way that if you rush into a relationship then you could get hurt and the other one is about how if you wait for the right time to get into the relationship then it could work out better then you think. They both have similar themes and story backgrounds and they also both involve two people having feelings for one another. But that is where the comparing ends. They both have a different meaning and different vibe.

One is happy at throughout and one is gets worse to get better throughout the progression in the poem. The structure in this poem is like a story, like theatre movie. They are doing everything in time to a story and plan to make it as happy and sweet as possible. Throughout this poem they walk through their life and start off as friends and by the end of the poem they have feelings for one another that they might want to take further one day. These two poems shave that in common with one another that the feelings towards the two people change either for good or bad.

The feelings in the first one change form good to bad and the ones in the second poem change from ok the good. These two poems have a lot of similarities and a lot of differences. The tone is this poem is mostly about love and trust. Unlike the other poem, Heaney writes about how the feelings change in a positive way between the two people and how they feel comfortable and not very nervous to show off, unlike the other poem were they felt they needed to show off for one another and show the other that they were ready for a relationship when they clearly weren’t.

In the first paragraph Heaney writes about how the two people go for walk down the embankment and get to know each other and have sense of caution between them. Heaney creates an oxymoron in the paragraph. “Her scarf a la Bardot in suede flats for the walk” this shows that although they still want to impress each other that there is still an element of safety and caution between them. The second paragraph is about how they talked and walked and it seemed like it was on a stage and that it was all planned out to be pretty and gorgeous.

They feel nervous and uncomfortable at first. “Dusk hung like a backcloth”, this shows that they feel that they are being watched which therefore makes them feel more nervous and the feeling of them being on display makes them feel self conscious. The third paragraph is about how the vibe is turning from nerves to unsteadiness about the feeling of being watched. The repeated use of “Hawk” gives a negative vibe in places and makes us believe that they are being watched as a hawk is a bird of prey.

Also, the use of the words hawk and dove was quite dramatic as these two are classed as enemies. They tend work alone and this shows there are negative parts and positive parts in this and it could also mean that this relationship could go either good or bad and that it is not decided yet. The fourth paragraph is about how they are hiding their feelings for on another because in past relationships they have told the other person and it has b=not worked out. They decided to keep it to themselves for longer so that they don’t get hurt.

“Not to publish feeling and regret it all too late” this is proving the statement I have just given is true. The last paragraph is about how they now feel in control of their feelings and possibly want to be more than friends. They now feel comfortable with each other and enjoyed each other’s company. They are falling for each other which comes into the theme of love. I like the second poem more because they want to take it slowly and this shows passion and love in deepest corners. This is more caring and more sweet, shows a soft side to poems.

The Thickness of Ice and Twice Shy. (2020, Jun 02). Retrieved from https://studymoose.com/thickness-ice-twice-shy-5085-new-essay 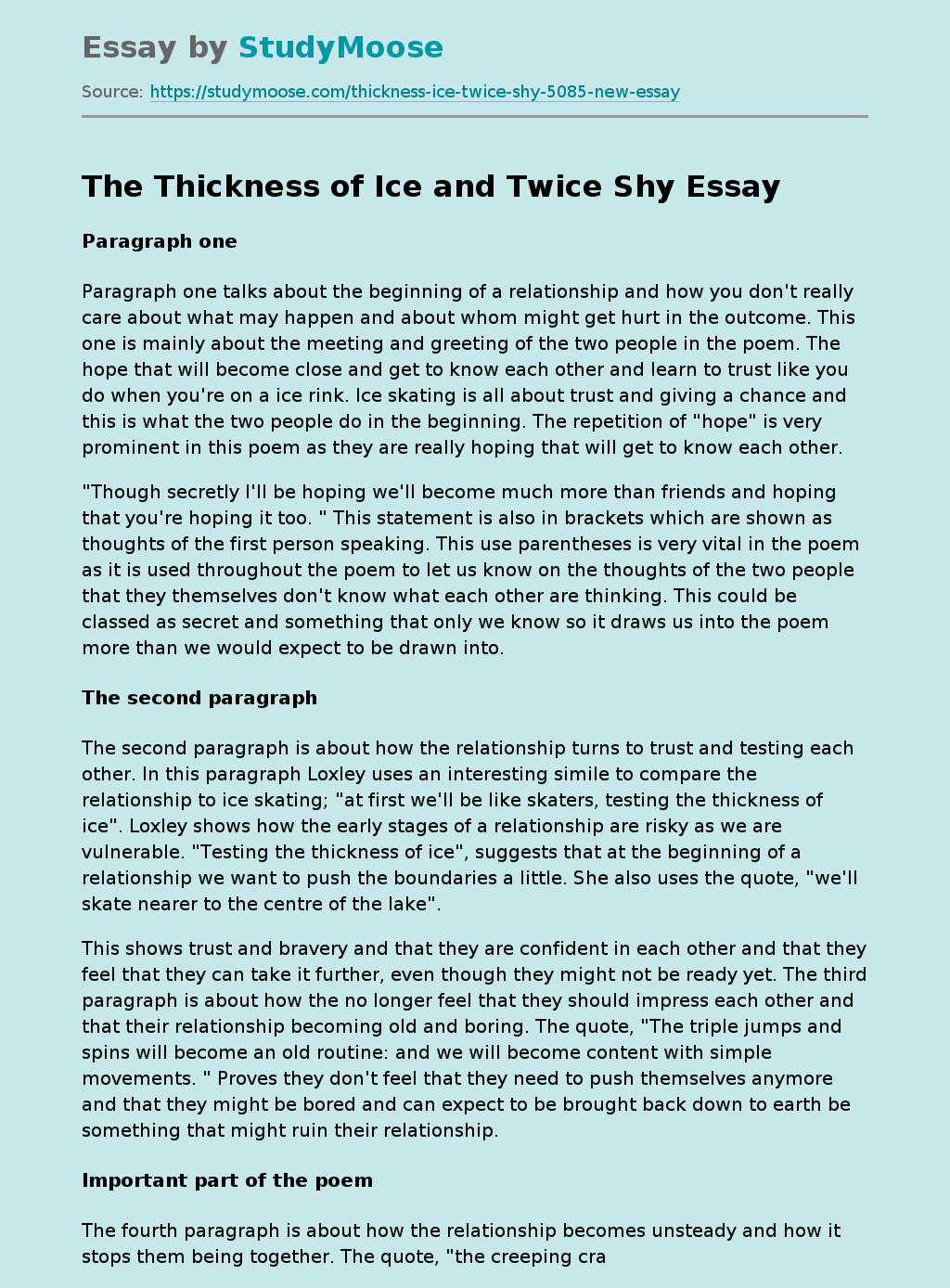