There's really no such thing as internal culture anymore Your

“There’s really no such thing as internal culture anymore. Your culture is always public, and it’s your most powerful, public-facing asset or liability”, ( Mattan, D).The human response of organisations like the NYPD to build up a blue wall of silence, to turn inwards resisting change is indicative of how organizational failure in part occurs due to an culture where negative habits and norms amongst workers are not challenged. This essay will discuss and analyse how organizational failure occurs using the texts of Patrick O’Hara and Dan Ariely.

Don't use plagiarized sources. Get your custom essay on
“ There’s really no such thing as internal culture anymore Your ”
Get custom paper
NEW! smart matching with writer

The author will also include her own professional experience of organizational failure applying the theories and concepts discussed.

Organizational failure has costly consequences for the organization and the individuals caught up in the shortcomings. In his book, “Why Law Enforcement Organizations Fail” Patrick O’Hara using the case studies of Michael Dowd, David Brame and NYPD ticket fixing educates the reader about how organizational failures in those instances occurred. He specifically addresses the role culture can play in organizations, how a weak and toxic one can lead it down the path of inevitable failure if it is not willing to identify its shortcomings and take necessary steps of correcting it before the wheels come off the runaway train.

Failures are expensive and deadly. It can result in expensive lawsuits and deaths of innocent parties. In the case of David Brame as discussed by O’ Hara in Chapter 4 it is clear there was concerns about this man before he had even begun his professional police career.

Both the psychologist and the interviewer- investigator who interviewed him prior to his entry to the force raised red flags about his suitability with issues raised by the psychologist including his ” tendency to exaggerate to the point of deception”, as well as ” his difficulty in evaluating situations and acting appropriately” ( O’ Hara , 2012, p.115). Skills which were surely inherent basic ones for a police officer who is expected to deal with volatile and dangerous situations as part of his basic duties. He had also been the subject of a rape allegation fifteen years prior to his application to join the Washington Police Department which although purged was considered by the investigators as “credible” (O’ Hara, 2012, p.116). So far not a great start for the police department but its continued failures must be considered intrinsic in the culmination of David Brame shooting his wife and taking his own life. Whilst the organization may have not pulled the trigger it is this authors opinion that its failures enabled the downward spiral of its officer.

Let’s have a look at the various opportunities the Washing Police had to intervene and address his violence, his control and paranoia or where their interactions enabled his behaviour. David Brame became the Chief of Police in Tacoma. However, relations with his wife were strained. Opportunity 1. She endured physical abuse from him and on one occasion called the police but did not file a complaint as she did not wish to get her husband into trouble at work. Enduring abuse is not uncommon as “85% of victims sought help on average five times from professionals in the year before they got effective help to stop the abuse (www.savelives.org.uk). Nothing came of her complaint. Chrystal Blane refused to entertain his wishes for her to engage in a threesome with her husband and one of his co-workers. She initiated divorce proceedings in 2003 due in part to this request and his volatile behaviour. Opportunity 2. Her husband not surprisingly reacted badly to this news and was very vocal in the workplace about his belief that she was going to destroy him. A senior ranking co-worker rang his wife to see if he could bring them back together, but the invitation was declined. She did disclose to the officer that he, David Brame had made death threats and of his threesome request. This officer was the Equal Employment Officer and had been aware of the domestic violence call mentioned earlier but did not act. Opportunity 3. The assistant chief has also discussed the domestic abuse allegation made by Chief Brame’s wife with the city manager and by all account his outwardly display of eccentricity, sloppy appearance should have warranted intervention. Opportunity 4. Chief Brame was supported by several colleagues at his divorce hearing and her family “perceived this police department phalanx as inappropriate”. When he moved out of the marital home his moving crew were three high ranking officials (O’ Hara page 117).

The above incidents seem incredulous. The police department of Tamaho’s mission statement is to ” reduce crime and enhance the quality of life through a cooperative partnership with all citizens” ( www.tampagov.net/police/about-us). Well in the case of Chrystal Brame it must seem everyone except the wife of a police officer, in that case the rules don’t apply. So, what caused the failures in this instance? The author believes the organization failure to not reprimand Chief Brame at an early juncture and treat him like any other perpetrator essentially gave him the green light to continue with his abuse of his wife. Police Officers are drawn from society, so they are just as flawed. However, police work brings with it unique stressors that are not comparable to any other occupation and the consequences of a police officer operating in the field not operating ‘on all cylinders’ is a sure recipe for disaster. When the “barrel” or the “orchard” choses to not intervene, it is shielding the problem and may in fact cause it to compound. The failure of any of his subordinates or colleagues to not speak up speaks volumes about organizational failure.

There's really no such thing as internal culture anymore Your. (2019, Dec 09). Retrieved from https://studymoose.com/there-s-really-no-such-thing-as-internal-culture-anymore-your-example-essay 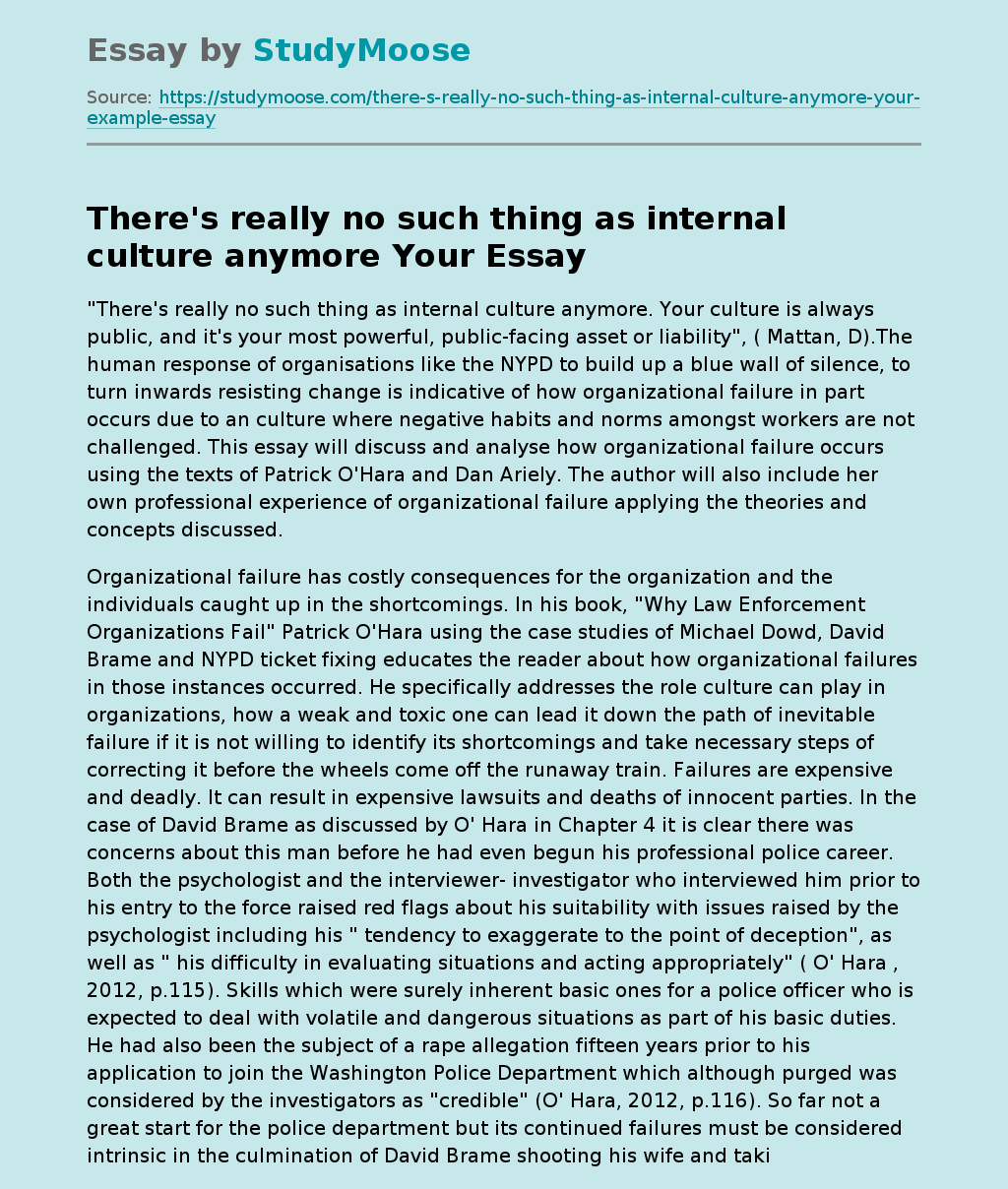