There Is a Fine Line Between Reality and Illusion

How can we distinguish between reality and illusion? Is reality an illusion, or is an illusion simply reality? Albert Einstein once stated that ‘reality is merely an illusion, albeit a very persistent one’. The statement suggests that what we interpret to be real may well be an illusion and this is evidenced mainly through dreams and aspirations. For example if someone has dreamt of one day being a doctor their reality, which is described as the state of things that actually exist, shifts or changes in order for that idea to become real.

Don't use plagiarized sources. Get your custom essay on
“ There Is a Fine Line Between Reality and Illusion ”
Get custom paper
NEW! smart matching with writer

Reality is tangible while illusion is a faculty or activity of imagination. What may be reality for one person may be an illusion for another and this is clearly evidenced through many situations that we as individuals face. What is real is often clouded by the concept of illusion for example the idea of what is glamorous, the difference between what is beautiful and what is real is distort by the media and its false interpretations.

However it is not only the media that can distort reality from illusion, the virtual world of computer games and Internet socializing has revolutionized the Nintendo 64 and the plain old phone call. We are now able to find solace inside the world of an Avatar or pet puppy that our parents never let us bring home, and instead of having real friends we can have as many as one thousand without even meeting them. Our emotions and mental state also contribute to the way in which we interpret our reality; it has proven to be a major impact of how we see things and importantly how we react to it.

The reality of today is what Einstein most famously predicted, that we as individuals sometimes find it difficult to interpret the real world from illusion. It may often occur that an individual chooses to disregard what is real and accepts their illusions. This can be portrayed when we are faced with a really dismal time in our lives and in order to cope we convince ourselves that one-day it will change, as T. S Elliot suggested ‘humankind cannot bear too much reality’. Blanche DuBois from ‘A Streetcar Named Desire’ has a similar reaction to her reality.

Her reality is that she has lost the love of her life to suicide, no longer remains a teacher and does not own any assets as she has lost the property known as Belle Reve. In order to endure her life Blanche rejects her reality and manipulates it with lies, makeup and lighting in order to hide from the truth. ‘I don’t want realism I want magic’, Blanche desires for a life of pure happiness and excitement, however her imagination is indistinguishable from her reality and the series of lies and dimmed lights soon begin to fade as she is met with Stanley Kowalski.

Stanley Kowalski, a brutish and arrogant realist finds it difficult to understand Blanche’s reality. Unlike Blanche, Stanley needs reassurance that what he knows is perfectly real and reliable. In the play the two characters continuously disagree with each other and eventually Stanley’s animalistic behavior threatens Blanche’s safety. Blanche and Stanley are a great example of how one individual’s reality is different to another’s, these conflicting ideas and perceptions of life occur often between people and have been proven to cause disagreement.

People around us have great influence of how we perceive things although there are other major influences that contribute to our perceptions for instance the media. The media has brought forward many deceiving images of models and famous Hollywood stars. These images of super skinny models with perfectly shaped bodies and teeth are portrayed to convince the audience that what we see is not only real, but also normal. We are lead to believe that if we wear special stockings that our fat will magically disappear, but who said that fat was ever ugly?

No one just decided one day that a little cellulite was atrocious; it is the media that guides and influences our perception over what is socially acceptable. The Hollywood stars of today seem almost out of this world if you like, for example Lindsay Lohan who appears to have a ‘perfect’ and glamorous life is forced to steal a necklace, so how perfect is her life? Each time a magazine reports Charley Sean drunk and causing a public nuisance the world is captivated by his actions.

Why is it that we find other peoples realities so fascinating? And why is it that we enjoy the escapism of entering the life of another? The twenty-first century has allowed Internet gaming to create fictional characters such as an Avatar to represent the virtual life of an individual gamer. Amy Taylor, 28, whose online avatar alter ego is named Laura Skye, divorced her husband because of his betrayal to her in the online game known as Second Life.

She claims ‘it may have started online, but it existed entirely in the real world and it hurts just as much’, the online virtual world of gaming caused such an influence over Amy Taylor and her husband’s life that real life and the game were clouded. Reality and illusion in this case seems bewildered. Our emotions are a major influence over the way we interpret life, when one is in a state of depression, your reality is surrounded by negative energy and therefore it is influenced by our state of mind at that present time.

In my personal experience I have witnessed the life of depression through a family member and often their reality is surrounded by the boundaries of fear and anxiety, and nothing can develop beyond those walls, happiness seems a mile away. Similarly Stella Kowalski’s love for Stanley has a major influence over her life and what she perceives to be real. It appears that she is blinded by their lustful relationship and can see no faults in his brutish behavior.

Stella undoubtedly chooses Stanley’s reality over Blanche’s and this is evidenced in the ending scene of the play where she allows her sister to be taken away even after the suspicion of Stanley abusing her. Behavior like this is also conveyed in everyday situations where woman who have been viciously abused and beaten remain with their partners because of fear that they will be alone. Stella finds Stanley to be a safe haven; she ran away from her life in the South to a life in a one-bedroom apartment in New Orleans and despite the diversity between the different lifestyles, she much prefers her life with Stanley.

It is clear that her love for Stanley is great, and that regardless of his behavior she finds solace within his presence. The difference between reality and illusion can sometimes be unclear due to factors such as the media, our emotions and also our state of mind. Reality is not a fixed idea and in the end is controlled by the individual; there are aspects that manipulate reality however it is solely in the individuals view to separate the conflicting worlds of reality and illusion.

There Is a Fine Line Between Reality and Illusion. (2016, Dec 01). Retrieved from http://studymoose.com/there-is-a-fine-line-between-reality-and-illusion-essay 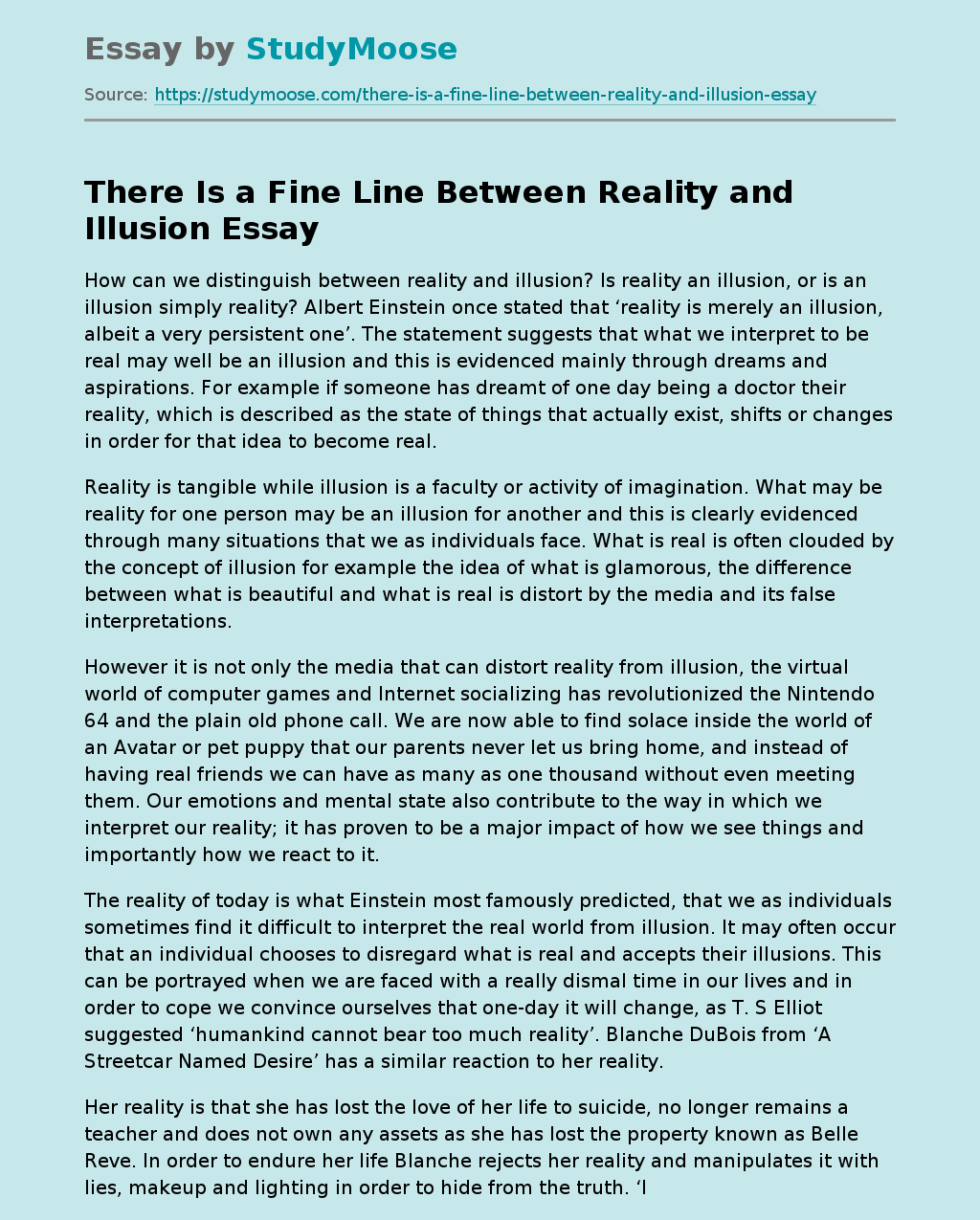