Nursing as a discipline follows certain rules or general procedures in their practice. Usually, the nursing process involves five phases starting with the assessment of the patient’s condition, followed by a diagnosis meant to identify the health problem of the patient. Afterwards, a planning phase would ensue wherein the nurse and the patient would discuss the possible course of action with respect to the patient’s condition.

When an agreement was made, the process would proceed to the implementing phase in which goal/s would be set and achieved.

Don't use plagiarized sources. Get your custom essay on
“ Theories Implemented in Nursing ”
Get custom paper
NEW! smart matching with writer

The final phase known as the evaluation phase happens when the goals are being achieved to identify whether the plan was successfully followed or to identify why the goals were not achieved in case of failure. Overall, the whole nursing process had been known as ADPIE. It was regarded as a step-by-step approach in the nursing profession aimed at solving the patients’ problem (Keogh and Richards, 2008).

Haynes and colleagues cited Carper’s fundamental patterns of knowing to summarize what knowledge are incorporated in the nursing process. According to Carper, it involves empirical knowing which is observable and uses scientific data, information and processes. Next on Carper’s list was aesthetic knowing, which reflects the claim about nursing as a form of art that involves empathy, care and compassion (Haynes and colleagues, 2003).

Another type of knowing is ethical knowing, that deals with decision-making regarding morality such as what the right thing to do and what must be done? The last type was personal knowing which involves the personal values and beliefs that can help nurses grasp meaning and create decisions required in their profession.

They incorporate various philosophies and approaches into their theory which results into a more integrative approach. It resolved the conflict between nursing as a science or an art by infusing them into a single paradigm. The MRM theory was affected by prominent thinkers such as Maslow who identified human needs, Piaget with his idea of psychosocial development, Erickson, Winnicott and colleagues and their concept of loss and Selye and Engel who identified the individual’s responses to stress and its causes.

Adaptation concerns how the client reacts to stressors. The APAM model distinguished three states in the process of adaptation: arousal, impoverishment and equilibrium. The APAM model helps the nurses to predict the “client’s potential to cope and mobilize self-care resources in response to stress (Alligood and Tomey, 2006)”. Self-care, typically involves making use of the patient’s “knowledge, resources and action” to improve his condition (Alligood and Tomey, 2006).

MRM theory makes use and reflects Carper’s fundamental patterns of knowing. It promotes the role of the nursing as an art while utilizing scientific and social theories that expand the role of nurses by giving them authority to interpret and analyze the patient’s condition based on personal knowledge. The plan and implementation depends on the nurse’s relationship, acceptance and impression of the client. Overall, the MRM theory modified the nursing process by assimilating the patient’s needs and reaction into the nursing process. 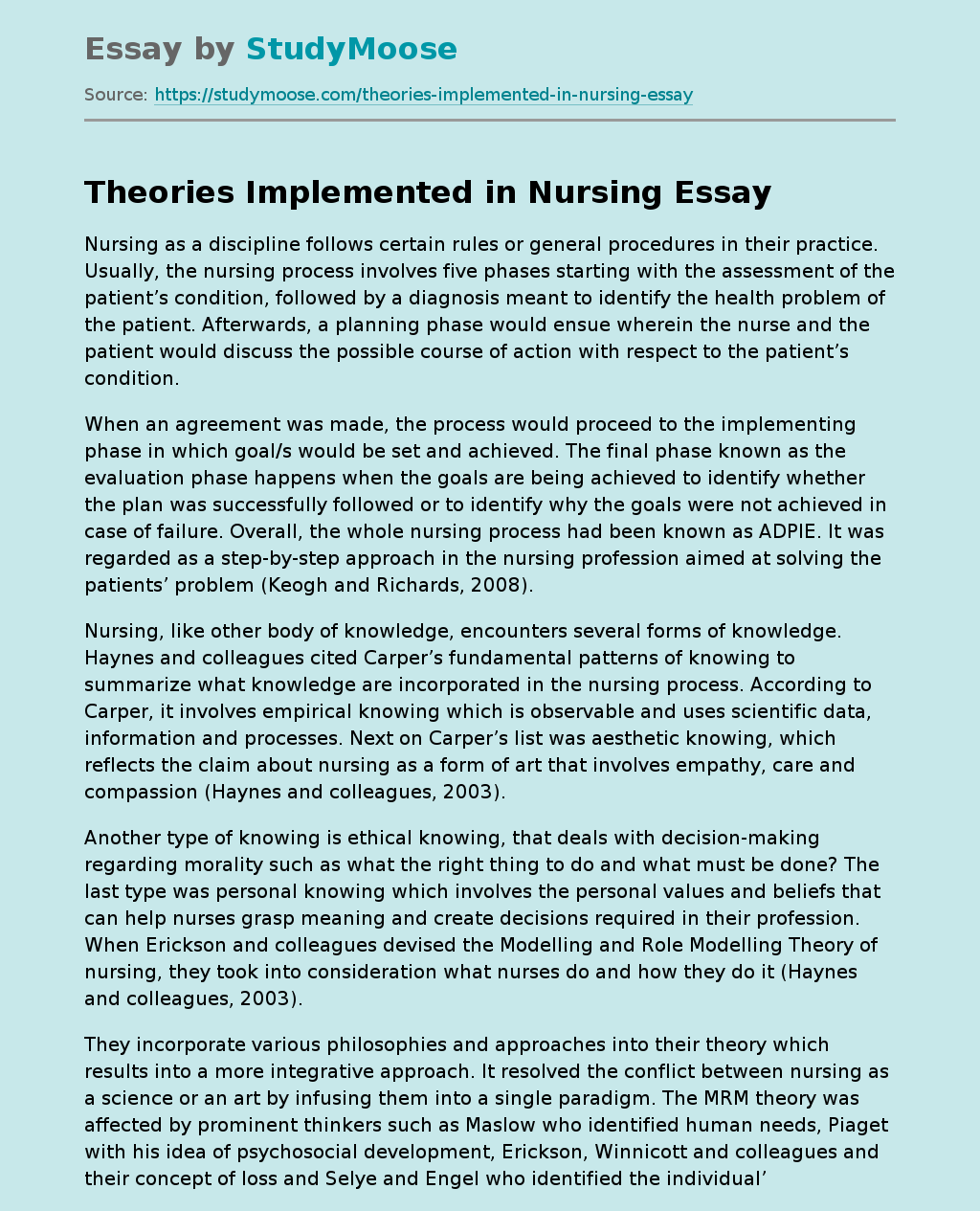