The science of nursing has come a long way since the days of when the art of nursing was passed on to other nurses through education of skills and tasks. Through the development of nursing theories, the science of nursing has changed and grown. Nursing theories were developed to help standardize care and to help create a base of knowledge so that nursing would be recognized as a profession. There have been many theorists who have played an integral part in the growth of the profession of nursing, which include, Florence Nightingale, Hildegard Peplau, Virginia Henderson, Dorothea Orem, and Jean Watson to name a few.

Don't use plagiarized sources. Get your custom essay on
“ Nursing Theories and Practice Development ”
Get custom paper
NEW! smart matching with writer

As theories developed, it helped to shape nursing as a profession as well. As the profession continued to evolve and grow, it received many influences from other disciplines as well, such as philosophy, social science, religion, education, and anthropology. The history of nursing began with Florence Nightingale and the way she viewed nursing and nurses. She was a pioneer for nursing theories.

According to George (2011), Nightingale created the first theory, which was created in 1859 by her book Notes on Nursing, by understanding how the environment of the patient and their health were affected by that environment. She believed that the environment was important for people to heal, and that manipulation of that environment was important. George (2011), states that Nightingale focused on people’s nutrition, the proper way to dispose of sewage, and how the lighting and ventilation would help people. This was just the beginning of how theories began.

For many decades, Nightingale’s theory guided nursing practice. Not until the 1950s at the Columbia University, where the students there were developing nursing theories, was there a shift in nursing theories. Some of the theorists during this time were Peplau, Henderson, Hall, and Abdellah. According to George (2011), many of the theories of this time were based on the biomedical model, and were focused on what the nurse and what they do. This sparked the need to have nurses more highly educated.

This also led to the next wave of nursing education. Alligood (2014) states that towards the 1950s the diploma nurse began to phase out and that more nursing programs were opening in colleges and universities, which had more research and curriculum focus. By having higher educated nurses, it showed that research became the way to increase nursing knowledge. The 1960s continued to demonstrate how nursing theories were changing. According to George (2011), the nurse and patient relationship became more the focus of theoretical thinking as opposed to the problem and need of the patient way of thinking. George (2011) also states that the same theorists from the 1950s that were developing theories went to Yale school to become staff there. This decade also showed a change in the education of nursing. George (2011) continues on to state that the American Nurses Association recommended that there be two levels of education, the baccalaureate level, and the associate level nurses.

During this decade the theorists to note were, Henderson, Orlando, and Wiedenbach. According to George (2011), Henderson “defined nursing as doing for others what they lack the strength, will, or knowledge to do for themselves” (p. 25). This shows how nursing began, and continues today. Walker and Avant (2011) state that Orlando and Widenbach’s theories focused on the nurse-patient relationship. In the next decade, according to George (2011), is when many nursing theories were presented and revised, and that this is when the National League for Nursing first implemented the requirement for nursing schools to have conceptual framework to be even accredited.

Alligood (2014) states that this decade is when doctoral degrees for nurses should actually be in nursing. Rogers, Orem, and Watson are some of the theorists that contributed to the science of nursing in this decade. According to George (2011), Rogers believed that a person and the environment are integral to each other, and the person is seen as the whole instead of the collection of the parts. George (2011) states that Orem had identified three areas of self-deficit in patients and that nursing were able to provide fully, partially, or supportive in the three areas that the patient needed. Lastly George (2011) describes Watson’s theory and how nursing is viewed as taking care of people through science.

The 1980s and 1990s continued to show growth and development of nursing theories. Many of the theories of the 1980s were being revised. According to George (2011) in the 1990s is when middle theories began to guide nursing and the introduction of evidence-based practice. This paved the way to how research helps to guide nursing in the science.

Nursing has grown since Nightingale first introduced her theory. It has evolved from an art and discipline, into a science and a profession. Barrett (2002) states that the best efforts toward discovering the truth, best represents science and scientific knowledge, and that it is evolving, subject to revision, is open-ended, and creates changes in ideas. Barrett (2002) goes on to state, “research is how we create science.” This goes to show that nursing is a profession, in that nursing is in a constant state of research and using that research to create better outcomes. According to Barrett (2002), the knowledge that is gained for nursing science is done through nursing research. Alligood (2014) states that in order for new knowledge to be obtained in nursing, it is paramount that theories and research continue to be important. It is through the continuous creation and revision of theories, and evidence through research that continue to shape nursing as a profession.

The nursing profession is one that draws many influences from other disciplines as well, such as philosophy, religion, education, anthropology, the social sciences and psychology. Nurses use philosophy almost on a daily basis, the quest for more wisdom. The nurse’s desire to want to understand patients and how their environment, social interactions, and choices affect their health. Wanting to understand more and grow nursing, theorist use the basis of philosophy to gain more knowledge. Religion is another influence in nursing that allows nurses to connect with patients on a spiritual level and to help guide ethical choices and to be a patient advocate.

Nursing places nurses in the lifelong student position as well. It is a profession where education is continuous, and it allows nurses to become educators as well. Anthropology and nursing are intertwined and have much in common due to both fields focus on the health and illness of human beings (DeSantis, 1994). Nursing is influenced by social science and psychology as well. It is through social science that nurses can deliver culturally competent care, from the understanding of people and society. Psychology helps guide nurses in to better understanding the human psyche, and how the mind and behavior affect people and their health.

The nursing profession has grown since Nightingale first introduced her theory. Since then, nursing theorist have been working on providing evidence-based practice to help guide the profession of nursing through research and studies. It is through the creation of these theories that helped pave the way for nursing science to become a profession. In addition, the influence of the many different sciences and their disciplines also contributed to the science of nursing. 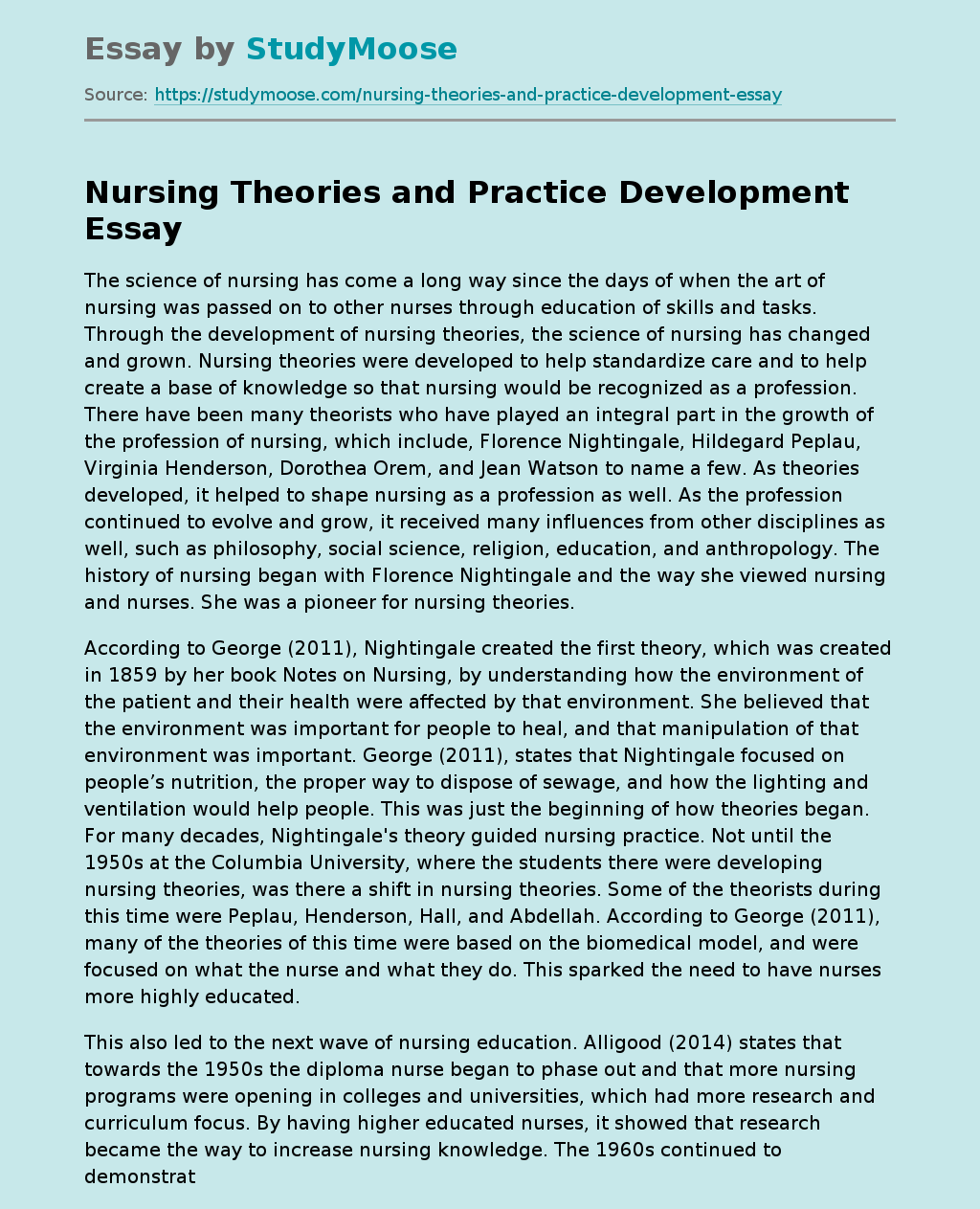