Theology and Christian Views in Dialogue with Trypho

In his work “Dialogue with Trypho” Justin Martyr in a form of a dialogue presents the views quite contrary to what it is usually taught. A well-known idea of Jews being the chosen nation favored by God is rejected. Justin Martyr is trying to find logic underneath God’s wrath, and his line of argumentation, based on analysis of the Old Testament, does emphasize the idea that Jews were punished by Mosaic rules for improper behavior. Jews are the chosen nation not because God likes them, but rather because they have to be punished for disobedience.

Don't use plagiarized sources. Get your custom essay on
“ Theology and Christian Views in Dialogue with Trypho ”
Get custom paper
NEW! smart matching with writer

The starting point of Martyr’s analysis is the presupposition that God is the only – both for Judaism and Christianity- God is eternal, “who created and formed the universe”. The second presupposition necessary for his line of argumentation is that God has “foreknowledge of future events”, however God “doesn’t prepare beforehand what everyone deserves”. I find a contradiction in this interpretation of God, since if God participates in human life, He performs some actions, and being able to forecast the events – He knows ahead what He will do, since the events on earth are directly influenced by his actions, therefore God, being the just one, has to prepare what we deserve, because if not – then God is unjust and performs spontaneous actions, God is capricious – a feature usually attributed to God by Muslims, but denied by Christians.

So, either God is just and active in human life, then our life is pre-determined, and the whole argumentation of Martyr falls to pieces, or God is unjust, capricious – this doesn’t go together with the image of God in Christianity, or God doesn’t know the future, but acts justly in the current situation – then we are responsibly for own actions, and only in this case Jews can be punished by God through laws, mandatory customs, and sacrifices.

Even though Martyr gives a different definition to God which I find illogical with his line of argumentation – he goes on discussing sins committed by Jews in front of God’s face for which they consequently were punished by Him.

The greatest sin of Jews is that they “murdered the Just One”, Jesus Christ, they violated the Law not once, but continue to do so “have persecuted Christ in the past and still do, and do not repent”. The genuinely chosen nation is the followers of Christ – saved by faith alone – who don’t have to follow all the traditions (Sabbath day, circumcision, limits in food), as these customs are imposed on Jews only for their sins and hardness of heart. I would like to stress the logic of Martyr underneath the idea of irrelevance of circumcision for a true Christian. Martyr gives two arguments to prove that circumcision was given to “mark you (Jews) off for the suffering”. The first point is that “God what not have created Adam uncircumcised” if circumcision would be necessary for salvation, however God created us imperfect in order to be able to choose between right and wrong so that we would experience genuine love to God and would be able to act according to our will.

In such way, circumcision can be just another step, payment or a way to show genuine love to God, lack of circumcision can be one of those imperfect signs in Adam and Eve as means to achieve holiness and find peace with God, a painful stage one has to pass. The second argument of Martyr is “the fact that females cannot receive circumcision of the flesh shows that circumcision was given as a sign, not as an act of justification” and at the same time women have the “capability of performing every good and righteous act”, so Martyrs’ idea is that if women cannot be circumcised – they cannot receive salvation, which they actually do receive. However, since women equally can be forgiven, they are also equally guilty, then why is it that God punishes by circumcision only Jewish men, but women stay uncircumcised? In such was, if God according to Martyr has to equally distribute salvation to both men and women, he also has to equally distribute punishment being just be definition, however in case of only Jewish men, but not women, being circumcised, God doesn’t do that. These two arguments of Martyr don’t prove anything.

Martyr goes even further then this stating that the Jewish scriptures belong to Christians, but not to Jews. He presents events in the OT in a different shade, being symbolic for Gentiles and predicting the coming of Jesus Christ. “The mystery of the lamb which God ordered you to sacrifice as the Passover was truly a type of Christ”, “prophet Moses remained until evening in the form of the cross… happened in the likeness of this sign”. These explanations of parts of the OT purposively provide additional support to Gentiles being favored by God rather then Jews, however OT scriptures were written over a vast period of time, combined in a stranger manner having 4 – J, P, DH, E sources.

And every source brought additional changes to the scripture adjusting the text to those currently in force, East and West, and Aaronic and Mosaic priesthood. There exists a view, that prophecy about coming of Jesus were added only after the coming of Christ and the fact that the majority weren’t well educated only contributes to the fact that using this understanding of Bible as a support is more then relative and has to have a deeper argumentation. Moreover, there are a lot of references in the Bible, where it is directly stated, that the scriptures belongs to Jews, that they are the chosen nation and that God will protect them throughout their life-time and the life-time of their descendants.

Martyr presents guidance for life to Jews through explanation of who, in his opinion, would be saved. Martyr says that a Jew could hold up to the rules given in the OT, but still every Jew has to accept Christ as a savior, through faith, however he denies that the OT laws are actually necessary even for a Jew. In such way, Martyr doesn’t give a solution of the problem, as he neither rejects, nor accepts the OT, he cannot give a definite answer on what actually should be changed in traditions of a Jew, as he neither bold enough to deny the scripture, nor bold enough to re-affirm it.

Generally, “Dialogue with Trypho” by Justin Martyr is an interesting work because of its uncommon world view, however it is written in a kind of free style without the argumentation being presented from the opposite side. It is useful to read, but I just cannot agree with his views, as all of his positions will hardly stand up to strong contra-argumentation. Frankly speaking, I doubt that a person will ever manage to figure out the reasoning of God, who had chosen the Jews either for punishment or praise, because this is what Martyr is attempting to do – rationally prove and explain the motives of God for the punishment of Jews, which is impossible.

Theology and Christian Views in Dialogue with Trypho. (2016, Jul 21). Retrieved from http://studymoose.com/theology-and-christian-views-in-dialogue-with-trypho-essay 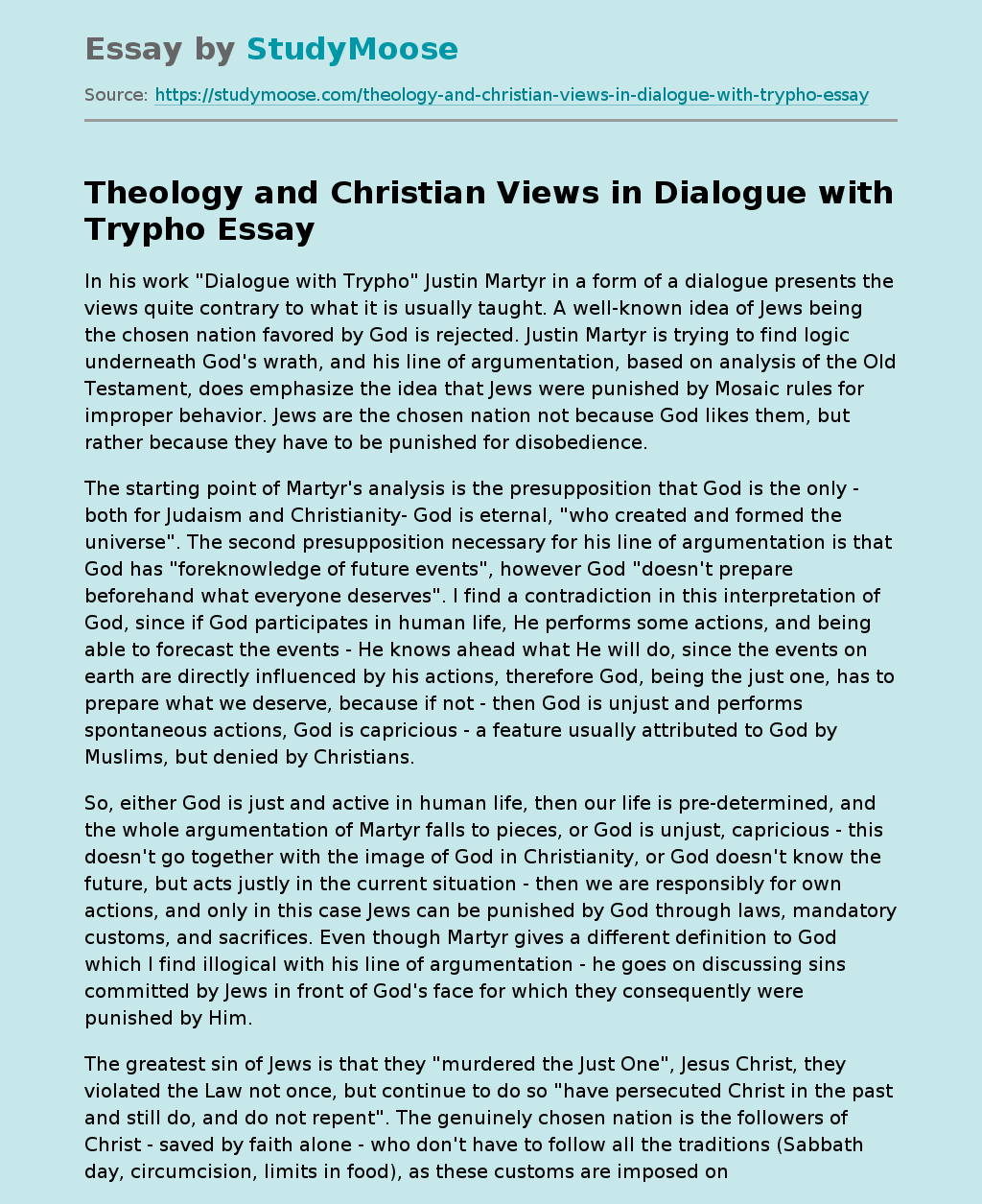