Theme of Love in "“Superman and Me” by Sherman Alexie

Sherman Alexie’s essay “Superman and Me,” discusses how a young Indian boy’s love for reading developed and his refusal to conceal his intelligence to meet society’s expectations. This essay is in first person perspective and includes Alexie’s own personal experiences, allowing the readers to connect with him. He emphasized his poor living conditions to prove that anyone, regardless of their situation, can be literate. Furthermore, education is not unacquirable, whether the individual is rich or poor, everybody has an equal opportunity to learn.

Don't use plagiarized sources. Get your custom essay on
“ Theme of Love in ““Superman and Me” by Sherman Alexie ”
Get custom paper
NEW! smart matching with writer

However, in order to be educated one must be determined. For example, the author states, “I refused to fail. I was smart. I was arrogant. I was lucky. I read books late into the night, until I could barely keep my eyes open. I read books at recess, then during lunch, and in the few minutes left after I had finished my classroom assignments” (Alexie 2-3). The author lived in a community where Indians were viewed as unintelligent and instead of conforming to what was expected of him, he chose to be different from the rest of his peers.

He wasn’t afraid of expressing his intelligence or his love for reading.

In Sherman Alexie’s story “This is what it means to say Phoenix, Arizona” a man named Victor finds out that his father has passed away. Victor is responsible for gathering his father’s ashes, which requires him to make an out of town trip. In order to accomplish this Victor needs help.

This help comes from Thomas Builds-the Fire. The story is told through third person point of view. At the beginning, the relationship between Thomas and Victor was weary due to incidents earlier in their lives. As the story progresses, the characters start to forgive each other. The purpose of the story emphasizes the tragedy of estrangement. The first example of this concept is that the story introduces Victor and his father. When Victor learns of his father’s death, they have been estranged for years: “Victor hadn’t seen his father in a few years, only talked to him on the telephone once or twice, but there still was a genetic pain, which was soon to be pain as real and immediate as a broken bone” (Alexie 59). The narrative emphasizes the fact that Victor still feels the pain of his loss, and that this pain may be amplified by the fact that Victor did not have the chance to get to know his father better.

Both main characters in the writings are Native American and come from a poor background. One writing is talking about how a young boy doesn’t give into a stereotype that Indians are dumb, and the other piece is about a man who needs help and during the journey grows as a person with someone who was once his friend. In his essay “Superman and Me,” Sherman Alexie states that through teaching reading and writing he hopes to save Native American lives. He recounts how he learned to read through a Superman comic book and focused on an image of Superman breaking down a door, which led him to understanding the words. The structure of “This is what it means to say Phoenix, Arizona” is significant because, Victor experiences rebirth through his journey to deal with his father’s ashes. Just as a phoenix must change and be set on fire in order to be reborn from the ashes, so too does Victor have to change, with the help of Thomas.

Theme of Love in "“Superman and Me” by Sherman Alexie. (2021, Aug 17). Retrieved from https://studymoose.com/theme-of-love-in-superman-and-me-by-sherman-alexie-essay 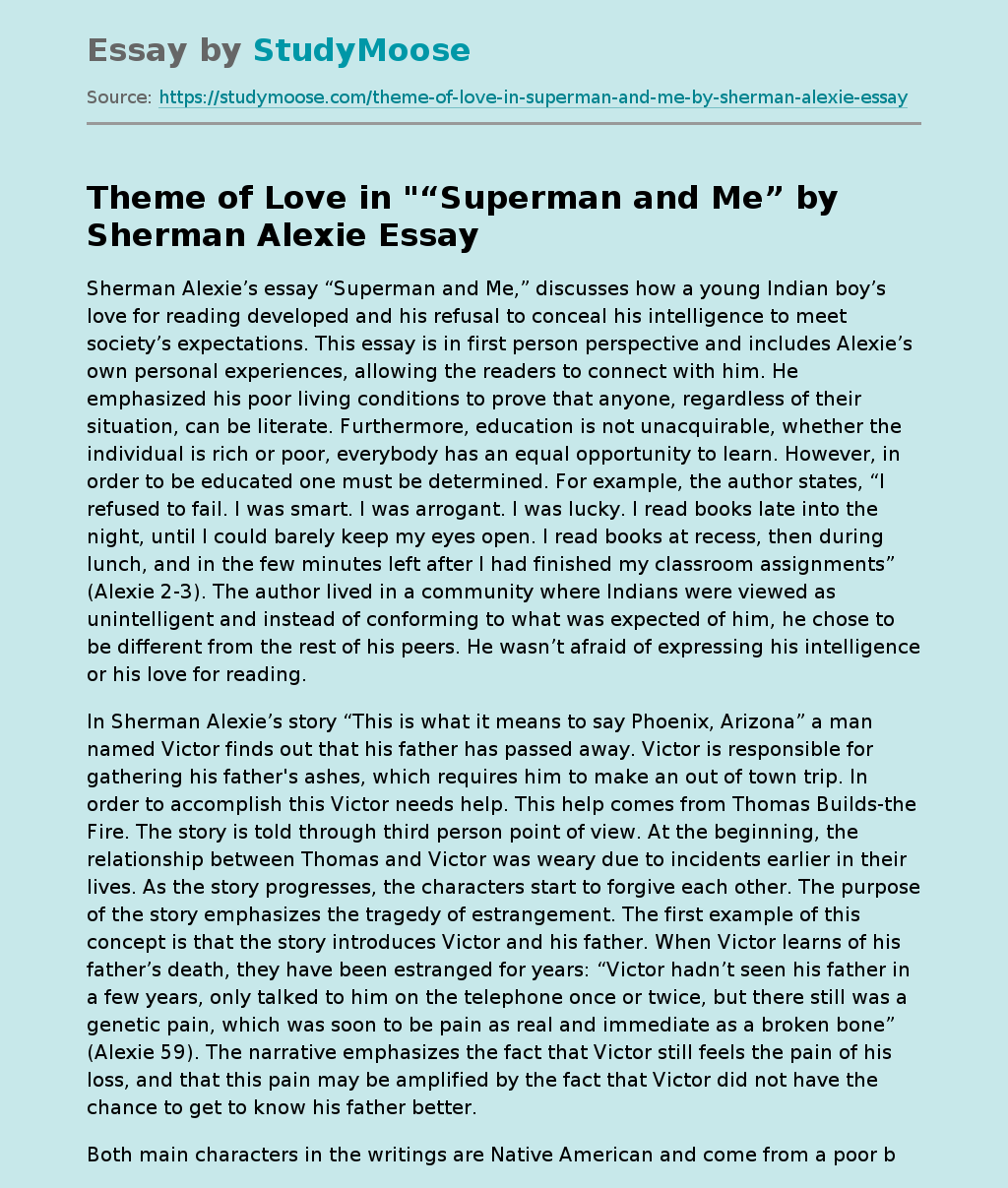