Sherman Alexie's Superman and me

Sherman Alexie’s “Superman and Me”

Sherman Alexie’s “Superman and Me” (pg. 27) is in the genre of auto-biography.

The main ideas of this story are Sherman Alexie’s experience of learning to read, the power of words, Sherman Alexie’s experience overcoming diversity and his path to success. The story begins with him teaching himself to read using a Superman comic book. He could not read the words but, used his imagination to create a dialogue he believed went along with the pictures.

Don't use plagiarized sources. Get your custom essay on
“ Sherman Alexie’s Superman and me ”
Get custom paper
NEW! smart matching with writer

He advanced in this subject reading extensively above his age group. The story goes into him being discriminated against by his peers and teachers. His talent is overlooked due to the fact he is a Native American from a reservation. He was bullied because of his intelligence. He felt he was expected to fail, but chose to overcome that expectation by working hard. He originally planned on becoming a pediatrician, but, after becoming squeamish during his anatomy classes he was drawn to writing.

He likes to visit schools to teach creative writing to Native American children. The children he is teaching are excelling. Many are writing their own stories and poems and reading many books.

Sherman Alexie was interested in reading at a very young age. He mentions his mother and siblings, but writes a whole paragraph about his father and his love of reading. This portrays to the readers that this had a great impact on his life, even if he did not realize it at the time.

He writes about his childhood saying: “We lived on a combination of irregular paychecks, hope, fear, and government surplus food.” (pg. 28). This sentence gives the readers the sense that perhaps he lived in a dysfunctional home and his childhood was filled with instability. One thought would be that he used reading as a form of stability.
Sherman Alexie taught himself to read using a Superman comic book. He writes about not understanding the narrations that went along with the pictures but using his imagination to create his own dialogue for the story. He also writes about Superman breaking down doors and also uses that as a metaphor for his experience in teaching himself to read.

This gives the impression that learning to read opened a whole new world to him. It also gives the impression Superman was more than just a character to him but perhaps a positive role model. He writes about people having low expectations for him (including his classmates and teachers). He had a thirst for knowledge. He chose to overcome that expectation, to break down the door.

Although, it is not what he originally planned to do with his life, Sherman Alexie has become a published author and has won many awards for his work. He visits schools on reservations as often as possible teaching creative writing to Native American children. This shows he has a sense of giving back to the community. He could have taken his success and not looked back so to say, but has chosen to show other people that they do not have to accept low expectations, discrimination or defeat. That they too have the capabilities to break down doors.

In reading his writing it is portrayed that he has a great sense of pride for the children he is teaching and their accomplishments. In conclusion, “Superman and Me” is a very inspiring story written by a very inspiring individual. The fact alone that he taught himself to read, especially at such a young age is amazing. It would have been easier for him to give in to the low expectations and prejudice people were holding against him, but he chose not to give in, to work hard to gain success. Many people can identify with this and use his creativity, work ethic and drive for success as motivation.

Sherman Alexie's Superman and me. (2016, Apr 19). Retrieved from http://studymoose.com/sherman-alexies-superman-and-me-essay 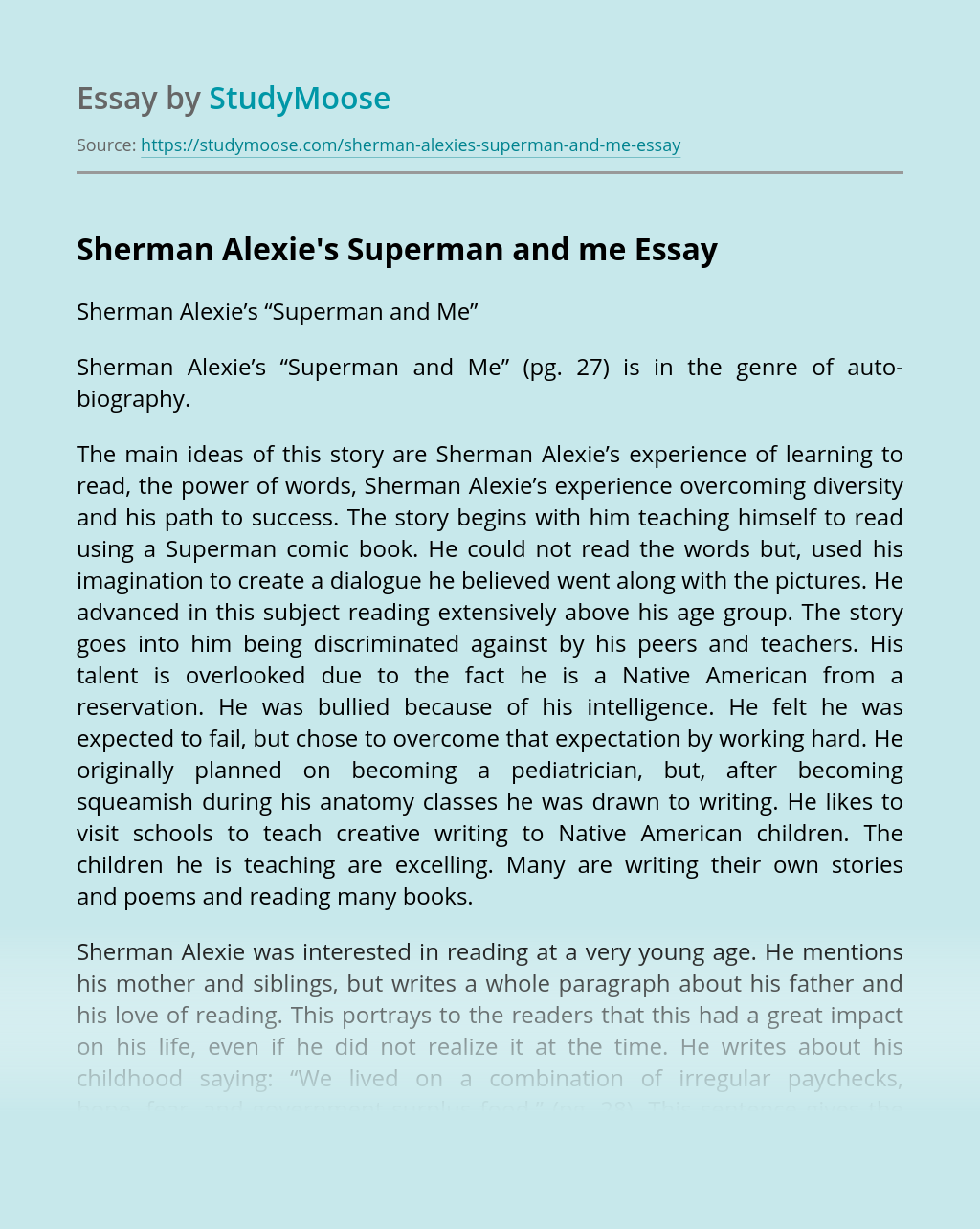