Their Eyes Were Watching God Movie

Throughout the book Janie struggles to find the true definition of love and how to make herself happy with her relationships. She goes through several different ideas of love before finding that it is mutual compassion, understanding, and respect that makes her the most happy. Near the beginning of the book, Janie develops an idealistic view of love whilst lying underneath a pear tree. She is young and naïve, enthralled with the beauty of spring. She comes to the conclusion that marriage is the ultimate expression of love and finds herself pondering why she does not have a partner.

Don't use plagiarized sources. Get your custom essay on
“ Their Eyes Were Watching God Movie ”
Get custom paper
NEW! smart matching with writer

In the rashness of her hormone clouded brain, she is drawn to Johnny Taylor, who is nearly a stranger. This is her first experience formulating ideas about love and marriage. The pear tree becomes a representation of this hopeful and young idea of love. page 11- “She saw a dust-bearing bee sink into the sanctum of a bloom; the thousand sister-calyxes arch to meet the love embrace and the ecstatic shiver of the tree from root to tiniest branch creaming in every blossom and frothing with delight.

So this was a marriage!”

However, her previous ideas are shattered due to her marriage to Logan Killicks. She hopes and believes that, after marrying him, she will eventually grow to love him. Unfortunately, he is too rough with her and Janie never develops feelings for him. page 25- “The familiar people and things had failed her so she hung over the gate and looked up the road towards way off.

She knew now that marriage did not make love. Janie’s first dream was dead, so she became a woman.” The last phrase “so she became a woman” also points out that her first failed marriage has caused her to mature past the previous “pear tree” ideas. She is no longer naïve, and has been exposed to the world more so than before. Nanny instills the idea into Janie that love was not as important as having a life with a stable husband and income.

She does not want to see Janie in the same position that she and her daughter were in. She only wants her to be safe from harm and poverty. This idea of love influences Janie’s choice in men in her first two marriages, and ultimately leads to her being unhappy. page 15- Nanny states, “’Tain’t Logan Killicks Ah wants you to have, baby, it’s protection.” This summarizes her reasoning in having her marry Logan and the idea that she gets across to Janie. Hope for another, more successful but still profitable marriage was what drove her to marry Joe. He was an opportunity to get away from Logan, but also seemed wealthy. page 29- “Janie pulled back a long time because he did not represent sun-up and pollen and blooming trees, but he spoke for far horizon.

He spoke for change and chance. Still she hung back. The memory of Nanny was still powerful and strong.” Janie’s relationship with Jody was a failure because there was a lack of equality and respect between the two parties. First of all, Janie feels uncomfortable that Jody goes about making the town great while she is left to do nothing. She is treated as authority simply because she sleeps with authority, as she puts it. It makes her feel isolated. page 46- “A feeling of coldness and fear took hold of her. She felt far away from things and lonely.”

The head rag which Jody forced Janie to wear around the store was a symbol of his controlling nature and dominance over her. He feels that she is a property of his and only he should be allowed to appreciate her beauty. page 55- “That night he ordered Janie to tie up her hair around the store. She was there in the store for him to look at, not those others. “ He also does not allow her to converse with the customers on the porch of the shop. He is incredibly domineering and it prevents Janie from being happy.

Janie’s final relationship is the one that is successful. He treats Janie more like an equal and there is a mutual understanding and compassion. There is a long list of instances that prove that Tea Cake’s relationship with Janie was the relationship in which Janie is treated the best and was the most happy. This is also the relationship in which Janie develops as a woman and is able to become independent. page 95- “He set it up and began to show her and she found herself glowing inside. Somebody wanted her to play. Somebody thought it natural for her to play. That was even nice.” Tea Cake, from the start, does not isolate her. He plays checkers with her, showing that he does not just think of her as a dumb incompetent woman like Jody did. page 105- “It makes uh whole heap uh difference wid most folks, Tea Cake.”

“Things lak dat got uh whole lot tuh do wid convenience, but it ain’t got nothin’ tuh to wid love.” Tea Cake shows that the age difference between them is not a concern and does not get in the way of their love. There is an understanding between the two of them that this will be of concern to most people, but they decide to look past it. page 124- “Looka heah, Tea Cake, if you ever go off from me and have a good time lak dat and then come back heah tellin’ me how nice Ah is, Ah specks tuh kill yuh dead. You heah me?” Tea Cake returns home after Janie has a panic attack regarding the two hundred dollars she thought he stole. She assumed he had run off, but he returned with it. This sets up trust between the two parties.

Additionally, there is understanding between the two of them, as Tea Cake accepts that she wishes to accompany him to future events. This also sets them up to spend time with each other instead of Janie being isolated like she was with Jody. page 148- “Janie is wherever Ah wants tuh be. Dat’s de kin uh wife she is and Ah love her for it. Ah wouldn’t be knockin’ her around. Ah didn’t wants whup her last night, but ol’ Mis’ Turner done sent for her brother tuh come tuh bait Janie in and tke her way from me.

Ah didn’t whup Janie ‘cause she done nothin’. Ah beat her tuh show dem Turners who is boss. Ah set in de kitchen one day and heard dat woman tell mah wife Ah’m too black fuh her. She don’t see how Janie can stand me.” This shows that Tea Cake loves Janie and prefers not to beat her, unlike most husbands of the time. He is compassionate with her and only beats her because he does not want her taken away from him. The entire ordeal with Tea Cake contracting rabies shows how much they love each other.

The reason Tea Cake died was because of them expressing their love for each other by trying to save each other. Janie was trying to get roofing to shelter Tea Cake, Tea Cake was bitten in his effort to save Janie, and Janie was able to shoot Tea Cake because he taught her how to. Ultimately, Janie grew as a person from her marriage to Tea Cake. It was the marriage in which she was the happiest. After her whole ordeal with Tea Cake, she has found true happiness, and is content to spend the rest of her life resting in Eatonville.

Their Eyes Were Watching God Movie. (2016, Nov 25). Retrieved from https://studymoose.com/their-eyes-were-watching-god-movie-essay 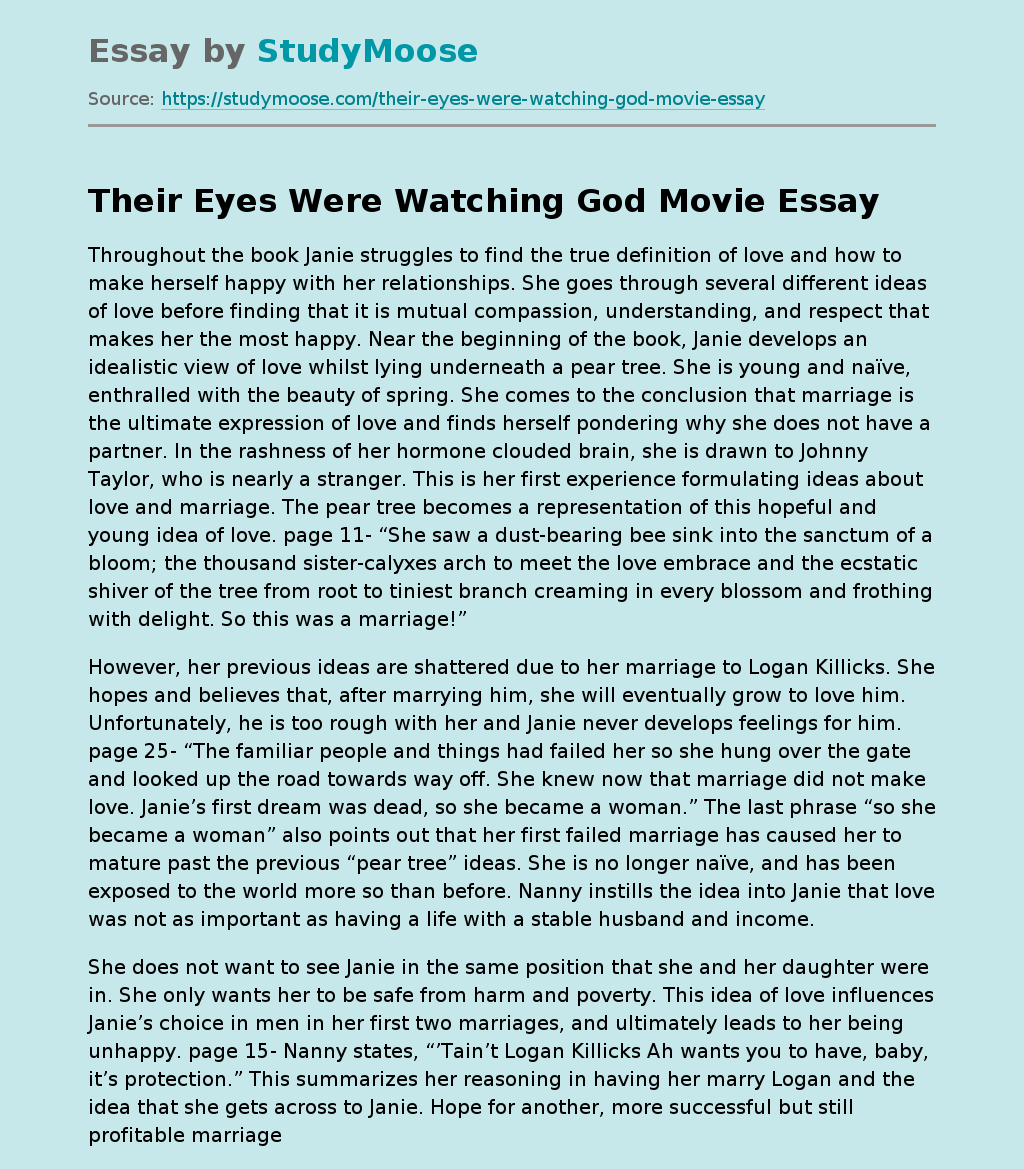