The Whipping Boy by Richard Gibney

The Civil War embossed America from 1861 to 1865 and only Americans participated in the war. The whole issue of slavery started the war; some were against it, while others were in favor of it. The war was mainly between the Southern States, who had slaves, and the Northern States, who had abolished slavery. “The Whipping Boy” from 2011 by Richard Gibney is a short story about three slaves in the Civil War, and the day they are told that they are free human beings.

Don't use plagiarized sources. Get your custom essay on
“ The Whipping Boy by Richard Gibney ”
Get custom paper
NEW! smart matching with writer

The story is about three slaves; Martha, Mikey and Tommy living in the Southern States in around 1861 to 1865, where slavery wasn’t illegal yet. All three slaves had never done anything besides being slaves for Mr. Gage, old Mrs. Gage and the son Sterling at their farm, where most of the story takes place. Mikey and Martha seems to be husband and wife, while Tommy is the brother of Mikey. Mikey and the slaves’ “owner”, Sterling Gage, used to be friends when they were younger, but that was ruined.

Why they aren’t friends anymore is explained in the following “(…) Sterling thought nothing of blaming Mikey, and Sterling’s father whipped Mikey with a severity the eight-year-old never forgot.” (p. 2 Ll. 49-51) Mikey feels betrayed because Sterling was supposed to be his friend, but when Sterling pilfered some sugar and his father found out, he just blamed Mikey. Through these actions you can say that Mikey becomes a “whipping boy”, which is an expression for a person who takes the blame for something he or she didn’t do.

In other words Mikey becomes a scapegoat, which could be referring to the title of the short story.

As it said in the quotation, Mikey will never forget the betrayal, and he wants his revenge, which he is given the opportunity to get, when the slaves become free. Besides being the wife of Mikey, Martha makes sure that old Mrs. Gage, who are getting more sick for every single day, are kept alive by making her food etc. When the boy delivers the news about the freedom of the slaves, Martha doesn’t believe him because “he was too young and underqualified to confer freedom upon anyone” (p. 1 L.10). She is a bit skeptical contrary the brothers, who wanted to use their new freedom to kill Sterling. However, they don’t kill him, but they are “just” whipping him, until Martha demands them to stop.

Maybe she does this because of what Sterling’s mother said to Martha earlier on. The old Mrs. Gage told her “Only you can save my son.” (p. 2 L. 58), which sort of gives Martha the power to decide the destiny of Sterling. You can say that the whip becomes a symbol of power. The power belongs to the man who holds the whip. When Mikey and Sterling were kids, it was Mr. Gage who was powerful, and he was the one with the whip. As time went by the whip and the power were “passed on” to Sterling, and when the slaves become free, the roles are switching and it becomes Mikey’s time to take the power and to whip Sterling.

The title of the short story does also foreshadow the whipping of Mikey as a kid, where he took the blame for stealing the sugar, which, in reality, Sterling stole. Furthermore the mentioning of Mikey being whipped could be a foreshadowing of Sterling being whipped, when he loses his slaves. Already in the second line of the short story a murder of two dogs; Rex and Sheperd Gage there is mentioned. It is described in details how the killings were carried out. This happens very sudden, and creates a very brutal atmosphere already from the beginning of the story.

The only reason for the killings, the reader is informed, is that “the slaves treated the dogs be er in death than the dogs had treated the slaves in life” (p. 1 Ll. 6-7). The dogs must therefore have been treating the slaves very badly, but it is somehow hard to imagine, how a dog can treat a human worse than the brutal murder. Nevertheless, the killing works as a foreshadowing of the killing of the slaves at the end of the short story. The foreshadowing gives a hint to further events in the text, and it also creates suspense and somehow the reader knows, that something bad is going to happen.

Some important themes in this story are war, slavery and freedom. The three slaves are living at the same time as the civil war from 1861 to 1865, where the issue of slavery was the main reason for the war. The slaves are set free, but they don’t get to enjoy it for a long time, because they are brutally killed on their way up North by a group of Confederate soldiers. In extension of this, a theme could also be power. The person who has the most power changes throughout the story, as the whip is a symbol of. Mikey wants to take revenge for being Sterling’s scapegoat, when they where younger.

When it’s declared that the slaves are free, he becomes able to take this revenge, which he does, by whipping Sterling repeatedly. This emphasize that revenge is a theme in this story as well. “(…) She pulled away, embarrassed at his lascivious behavior in front of a white boy“ (p. 1 Ll. 30-31) This quotation shows the difference between races at that time in America. The black has to act “well-behaved” and nice around white people, because the white have a higher rank in the society and they have more power than slaves/white.

Mikey, Martha and Tommy are all slaves for Sterling at the same time as the civil war in America from 1861 to 1865 is going on. The three slaves become free, and one of the first thing Mikey do, is taking revenge by whipping Sterling. The two dogs are killed at the beginning of the story, which foreshadows the killing of the slaves at the end. Thereby this is a story about war, slavery, power, revenge and freedom.

The Whipping Boy by Richard Gibney. (2016, Sep 22). Retrieved from https://studymoose.com/the-whipping-boy-by-richard-gibney-essay 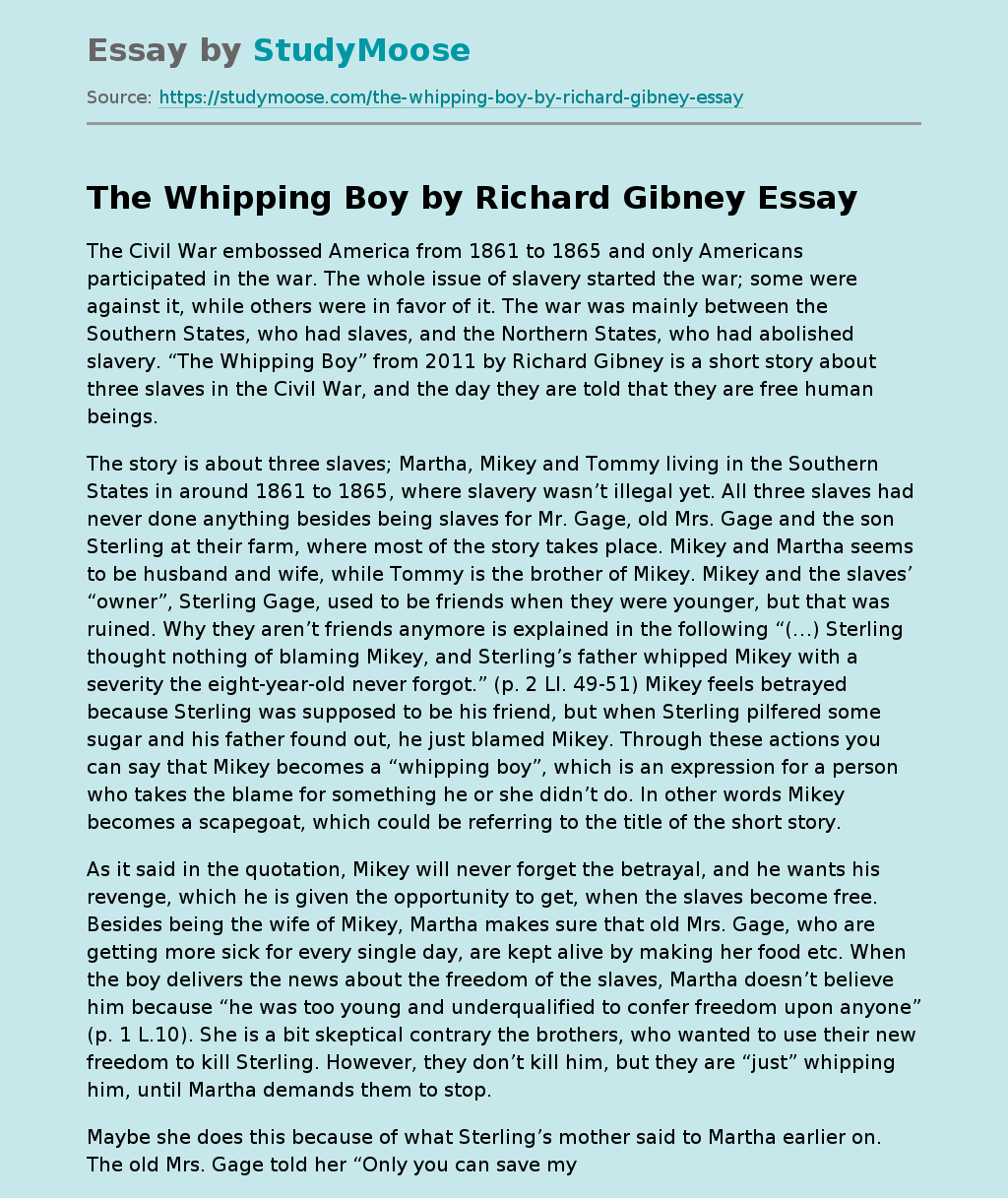