The Use of Biodegradable Plastics

The “normal” plastic products that we use everyday (such as plastic bags, plastic food packaging, plastic eating utensils etc.) are manufactured from non-renewable sources (coal, oil and natural gas). These plastics are non-degradable and take more than hundreds of years to break down in landfills, while 29 billion tonnes of this non-degradable plastic waste are dumped into those landfills every year worldwide! [Recyclaholics: The Facts] That plastic waste doesn’t just take up loads of space; it also releases methane, a greenhouse gas that is 23 times as harmful as carbon dioxide as a contributor to global warming! [Recyclaholics: The Facts] Therefore, these non-degradable plastic products are causing a giant environmental problem nowadays.

The usage of biodegradable plastic can solve this problem, because these plastics can biodegrade in about 2-3 months when composted properly. [Pays to Live Green]

PLA is made from the starch in corn (or sometimes wheat) plants, and it has the chemical formula (C3H4O2)n (see below). [Polylactic Acid] It is used to produce biodegradable plastics which in turn can be made into food packaging, compost bags etc. Before PLA can be manufactured, endosperm has to be separated from the gluten and fibre in the corn first using harvesting machines (this is done in normal corn harvests as well). [Lamb, Robert] PLA was previously manufactured using a two-stage process (adding enzymes to the starchy endosperm to turn it into a simple sugar named dextrose, and then going through the chemical process of fermenting the dextrose and polymerizing it into PLA), but recently, a team of chemists had successfully produced PLA using a one-stage process consisting of direct fermentation (using a metabolically-engineered strain of E.Coli bacteria), which combines the aforementioned two steps and makes the manufacturing process much simpler. [Quick, Darren] | |

Tea bags made with PLA plastic [Polylactic Acid]| The chemical formula of PLA is shown in the square brackets above [Chung, So Hyun]|

Economically, PLA was previously quite expensive (it cost over US$200 to make a pound of it) , because a costly two-stage process was used to make the plastic. [Pays to Live Green] However, now a one-stage process (using cheap low-grade corn) is used to reduce production costs, so that it only costs less than a dollar for each pound (1.5 cents per plastic bag) nowadays—–almost as cheap as traditional plastic bags (which cost 1.2 cents each). [Kerr, Drew] Traditional plastics will probably become more expensive as oil prices go up, so PLA is becoming an economically good alternative.

Environmentally, the production process of PLA generates 68% less greenhouse gases than the production process of traditional PET plastic, and no dangerous toxins are generated in either the production process, the composting process or when PLA waste is burned (which produces energy). This is because PLA is made from corn that can be grown quickly, instead of fossil fuels that takes millions of years to form. PLA is also safer to use and does not have any dangers of explosions in its production (there are such dangers while producing traditional plastic). [Corn Starch Plastic:The 7 Advantages and Disadvantages of Its Use] Making PLA takes less energy and emits much less carbon dioxide than making traditional plastic, but uses more water in the process (see table below).

Now Wal-mart plans to use 114 million PLA containers a year, and company executives estimate that the usage of those containers would save 800,000 barrels of oil (a non-renewable and precious resource) annually! [Royte, Elizabeth] Also, corn is a renewable resource PLA takes only 60-90 days to degrade (into carbon dioxide and water) in optimal conditions. [Pays to Live Green] This means that PLA can only be biodegraded in a large, controlled composting environment with lots of heat, moisture, oxygen and microbes to consume the lactic acid (in the entire U.S. there are only about 113 such composting sites) [Corn Starch Plastic:The 7 Advantages and Disadvantages of Its Use]. In a homemade compost pile, the plastic would degrade much slower.

However, if PLA does end up in landfills (or oceans), it will degrade just as slowly as traditional plastics, because there is no oxygen reaching the waste in landfills. PLA is also not as versatile as traditional plastic, because its melting point is at a very low 114 degrees Celsius, meaning that it cannot be used to carry anything hot. This low melting point (more than half as low as traditional plastic, which melts at 250-260 degrees) also makes PLA unrecyclable when mixed with other plastics, because the molten PLA would “contaminate” the mixture of plastic and cause it to be unable to recycle. Therefore, PLA is actually a headache to recycling companies, who have to pay to have it sorted out from other plastic waste. [Wood, Shelby] | |

The amount of energy, emissions and water needed in the production of one pound of each of these plastics is shown in this table. [Making Bioplastic]| The location of the endosperm (which is used to make PLA) in corn. [Corn Kernel Components]|

Morally, the use of PLA might also pose a great problem. PLA is made with the endosperm of corn plants, which are the yellow, edible parts of the corn kernels. Instead of being used to feed hungry people, this corn is used to make plastic. If all the disposable plastic products were made out of corn, 238,500,000 tons of corn (enough to feed over 600 million people) would have to be used to make plastic! [Dunn, Tim] Therefore, we can never use PLA to make all the plastic products we use, or else the price of corn would drastically go up and there would be widespread hunger and thirst (PLA also requires a lot of water to make) on the earth. (Of course, using traditional plastic, which is usually made of oil from the Middle East, also has its own moral issues.)

In summary, PLA plastic can only be used as an eco-friendly material when it is disposed of with care in composting sites. People using PLA should make sure that its waste is either burnt safely or sent to a large composting site, otherwise it will cause even more problems for the environment.

The Use of Biodegradable Plastics. (2017, Jan 20). Retrieved from http://studymoose.com/the-use-of-biodegradable-plastics-essay 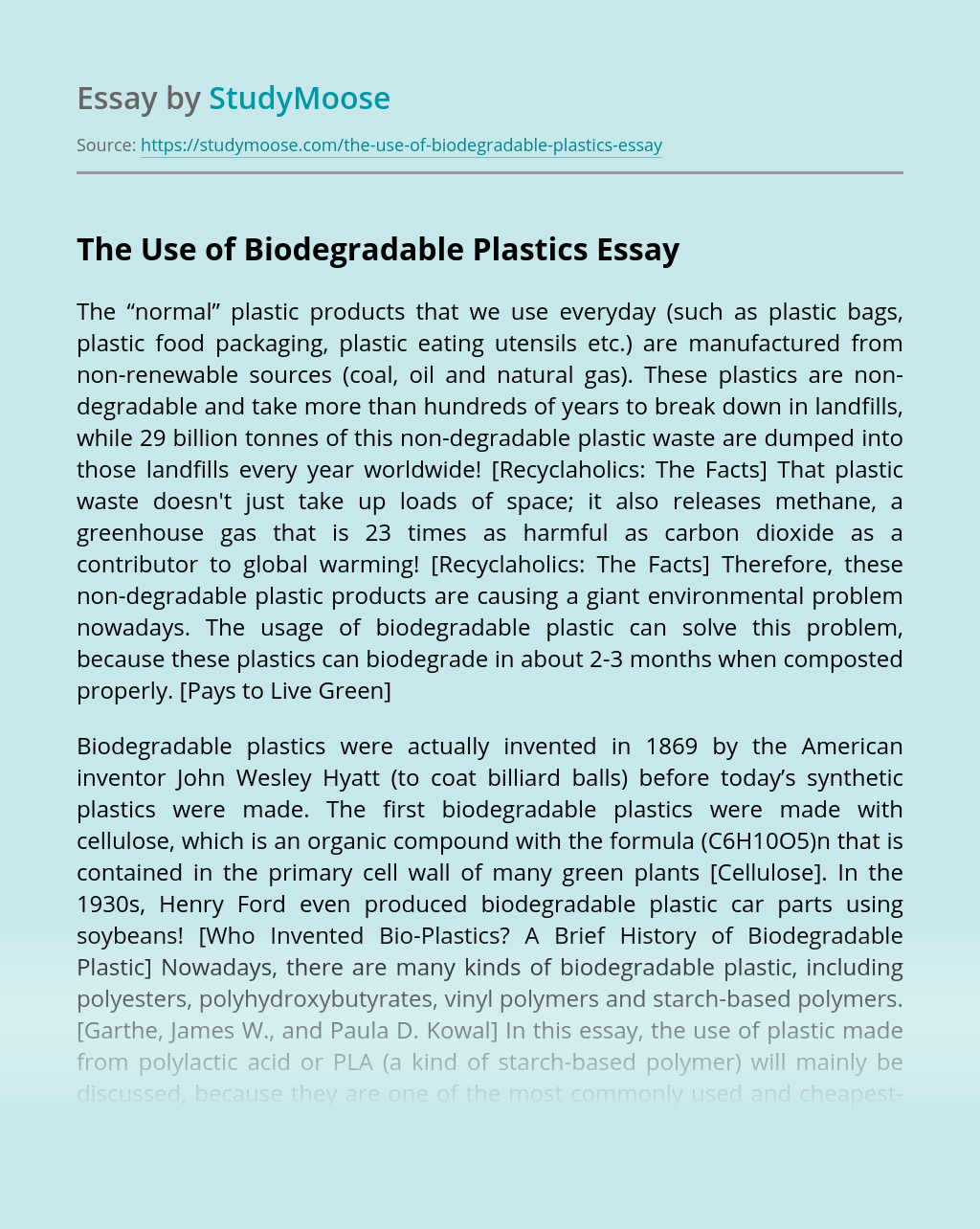 Don’t waste time
Get a verified writer to help you with The Use of Biodegradable Plastics
Hire verified writer
$35.80 for a 2-page paper
Stay Safe, Stay Original