The topic is “Artist make a difference”, years by years lots of songs released for the purpose of making some difference depend on their music. There are lots of global issues nowadays, one of the most common problems is Gender Inequalities. There are 135 nations achieved gender equality although there are still some hidden gender discriminations prevail today (Nake M. Kamrany and Catherine Robinson, 2012). Gender inequality for deeper meaning and understanding, it is when the men and women do not enjoy the same rights, same opportunities in the society.

Don't use plagiarized sources. Get your custom essay on
“ The topic is Artist make a difference years by years lots of ”
Get custom paper
NEW! smart matching with writer

Beyonce real full name is Beyonc? Giselle Knowles, she was born on September 4, 1981, in Houston, Texas.

She was a lead vocal in Destiny’s Child. She is a singer, songwriter, actress, record producer, and a dancer. In addition, “Pretty Figure 1: Picture of Beyonce in the Music Video

Hurts” was released in 2013, at that time according to UN Women there were events about resolution for women issue and fought for human rights. In this presentation, I will define more how the song and the artist impacted the world. They had used some metaphor and personification to get the messages across the lyrics to the audience.

The metaphor in the lyric is want to show that nearly every girl nowadays dream is to be perfect. (Emma Hill, 2015). They want to express the message to everyone about the social ideal, the women were born has to be pretty. The society has the prejudice that women have to be beautiful, have to be thin. She used the metaphor to make the lyrics more creative and realistic. She started the song with the conversation sound when she answering the question of the beauty pageant, the introduction of the song quite different from other songs. After the introduction, it starts with verse 1, pre-chorus, verse 2, pre-chorus, chorus, bridge, and chorus again then finish with an outro.

Analysis of lyrics and impacts.

Each part of the lyrics have different meaning and some of them are repeated to emphasize the main lyrics. Start with the intro of the song, is the recorded conversation during the pageant when she was answering the question, the judge asked about the aspiration and she answered is to be happy. She is pretty but not happy, it’s been a long time she hasn’t had any happiness in her life since she started to participate in the competition.

What is your aspiration in life?

Oh, well my aspiration in life would be… to be happy

Nextly, verse 1 and pre-chorus is talking about the mother nowadays with their child in the ideal body image in society, “Mama said, you’re a little girl, what’s in your head it doesn’t matter” there are many stereotypes around beauty and intelligence expectation. In the pre-chorus showed that, this competition where beauty is the most important thing. “Pageant the pain away” means, the busyness of the events can make her and her mom validation their pain, their effort, and their sacrifice. “This time I’m gonna take the crown”, she will win this pageant without falling down, succumbing to the other competitors.

Continue is the chorus part, the most important part and was repeated three times, now they use the metaphor when the lyric is “perfection is a disease” means that in the society’s idea of perfection is as spreadable as a disease. The prettiness is highly regarded in society. “We shine the light on whatever worst”, people always concentrate into the “wrong”. “Perfect is A disease of a nation” the Western culture has the impossible standard of beauty, people depend on that standard and try to destroy themselves like eating disorders, stress, and unhappiness. We usually improve themselves by changing the outside like plastic surgery but we can’t fix our soul, unhappiness, and stress, “It’s the soul needs a surgery”.

We shine the light on whatever’s worst

We shine the light on whatever’s worst

It’s the soul that needs a surgery

After the chorus, verse 2 is talking about how hypocritical and contrast of the society nowadays when “TV says bigger is better” however before “blonde hair, flat chest”. Moving on with the bridge, the metaphor shows that we have to leave something behind “You left with shattered mirrors and the shards of a beautiful past” means that the broken mirror is in the past we have to leave it behind (Emma Hill, 2015). Finishing with the outro, the song brings us the message that being yourself without fakeness is real perfection.

The pain’s inside and nobody frees you from your body

(It’s my soul that needs surgery)

Plastic smiles and denial can only take you so far

Then you break when the fake fa?ade leaves you in the dark

When you’re alone all by yourself

And you’re lying in your bed

Reflection stares right into you

You stripped away the masquerade

The illusion has been shed

Refer to the UN Gender Inequality timeline, there are 18 events related to gender inequality. These events are one of the important parts to change the gender inequality problem in society. January 23, 2013, India mobilizes on rape, after the death of 23 years old woman because of the brutal gang rape, the Justice Verma Committee is formed to solve it. On January 26, Kyrgyzstan’s president has stricter penalties on bride kidnapping. On January 31, France revokes the law that banning Parisian women to wear pant. On March 20, there is an agreement to end the violence against women and girls adopted. On April 17, New Zealand is the first country in the Asia Pacific to legalize same-sex marriage. There were a lot of events happened in 2013.

Furthermore, Pretty hurts also reduce stress and make their life more positive when they are body-shaming by others. (Quita Tinsley, 2015) The comment under the music video have said and advice for everyone who was body shaming to be positive after listened to the song in the music video.

Besides the lyrics, this song also expresses through the music video and the instruments. This music video released on 24 April 2014 later than the audio version, this video is very popular on youtube and hit over 230 million views after 5 years with the message showed clearly to the audience through the script of the story. There are about 56,057 comments, which mean that people have a strong connection to the song through the music video. As the audience, who is the third person, we could see the music video is about the pageant competition and she’s answering the question. We can see that people can do anything to be pretty like do plastic surgery, diet and jealous of each other to win this beauty competition. Moreover, the main character which is Beyonce is not happy, she is having stress tired, she falls into the melancholy. We could feel how painful societal expectations has caused for people. In addition, this song is about the stereotype of being beautiful based on society ideal image, however, she is trying to be beautiful, is it hypocrisy or not when she is trying to say that no one is ever satisfied by anyone, the world that we are living have there own expectation about man and women image. The camera techniques of the video are close ups to show the emotion in Beyonce’s face and also the other characters in the music video. There are medium shots to show the theme of the video which is a beauty competition the video also used tracking shots, quick shots, extreme close ups, panning shots and birds eye view shots. The editing skill is moving from shot to shot quickly. (Carta Appleby, 2016). The target audience of the music video is women and girls. The scenes of breaking the trophies is the symbolize the act of release, breaking through freedom from the society standard’s ideal of beauty. The music video has a strong connection with the lyrics, which is the theme that she wants to share to the beauty of imperfection, she does not win the pageant, however, she could find the real definition of beauty by her own. The music video has more emotions and easier to make connections with the audience. (Artcolumbia)

The song is 4 minutes and 17 seconds long. The genre of this song is Soul and R&B, this song used Trumpet, Tenor, Synthesiser, Drumbeat and a quite fast tempo which shows clearly the power of the song, how strong the message that she wants to send to the audience. At first few second when the song used piano melody to make the introduction, it makes people feel calm and attract to the song. After the piano melody is a little base drumbeat, then the vocal without music. The drumbeat turns the song from calm into more and more powerful, to emphasize the atmosphere. Even Though, the song didn’t use a lot of brass instrument, the powerful single vocal of Beyonc? with some instruments, has shown us the powerful of the message.

The topic is Artist make a difference years by years lots of. (2019, Dec 10). Retrieved from http://studymoose.com/the-topic-is-artist-make-a-difference-years-by-years-lots-of-example-essay 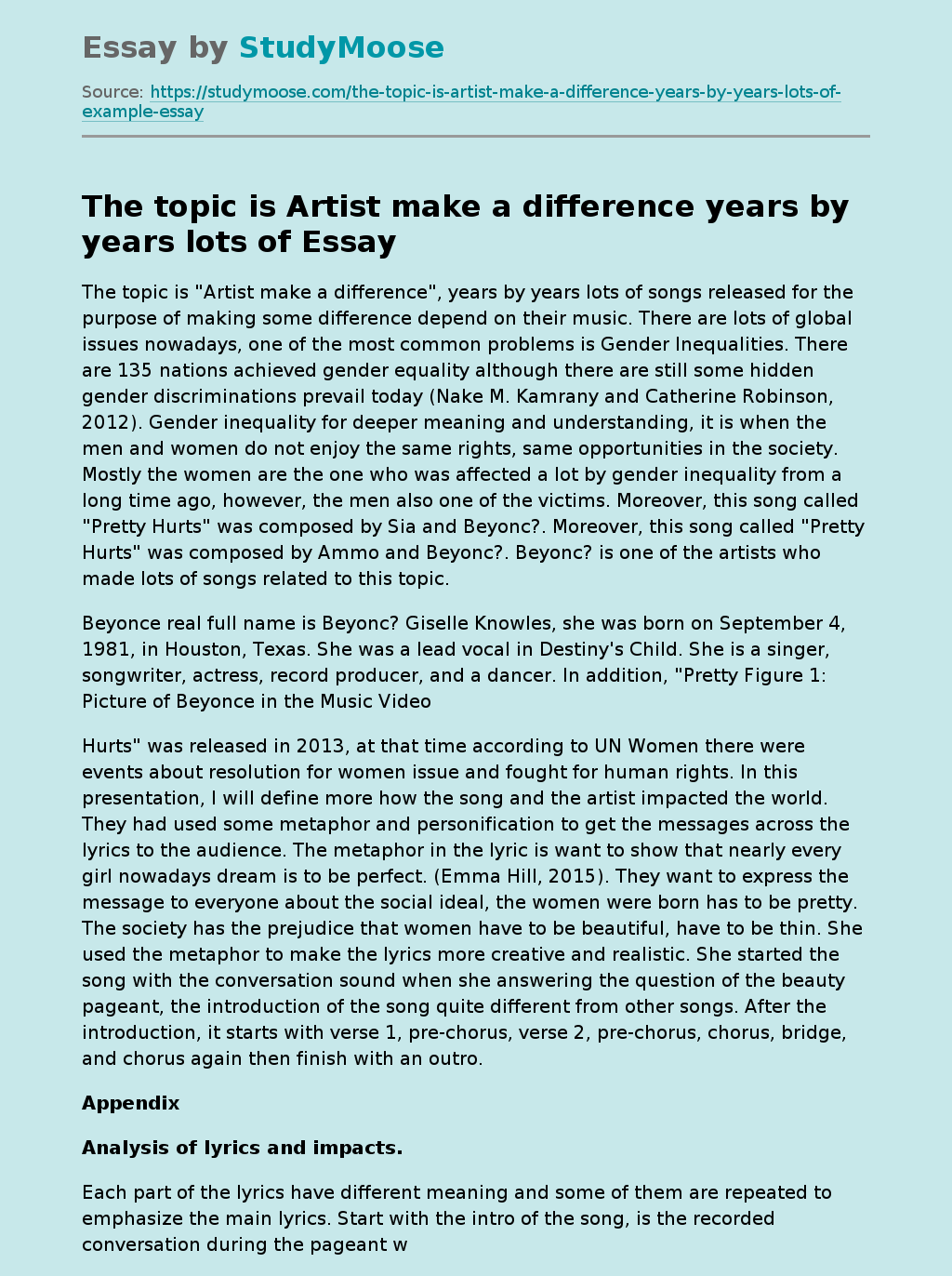