The Theme of Carelessness in The Great Gatsby Essay

The idea of carelessness plays an important role in The Great

Gatsby. Daisy, Tom, Jordan, Gatsby and Nick were all careless at some points throughout the book. Daisy and Tom were careless about their relationship, their money, and many of their daily activities. Gatsby was also unconcerned with his money. Jordan was blas about the way she treated other people.

ÒThey were careless people, Tom and Daisy – they smashed up

things and creatures and then retreated back to their money or their vast carelessness, or whatever it was that kept them together, and let other people clean up the mess they had made.

Don't use plagiarized sources.
Get Your Custom Essay on The Theme of Carelessness in The Great Gatsby Just from $13,9/Page

. . .Ó(189) This was an accurate description of the way Tom and Daisy acted. They were constantly neglectful of the way they behaved and when they realized they were wrong, they would retreat back to their money. It was always other people that had to pay for Tom and DaisyÕs careless mistakes.

Daisy also admitted that she was careless in a dialogue with Nick.

She quickly responded to Nick that she doesnÕt need to be careful. Daisy implied that it is the other personÕs responsibility to be mindful of her. She also said that she hates careless people right after she admitted that she was careless. Daisy was indifferent about her relationship with Tom. She knew that her husband was having an affair with another women but Daisy did not do anything about it.

Tom was careless in a much more obvious way. He was brutal as well as destructive. Tom felt that he could do anything he wanted and get away with it. He would never admit that he was dispassionate because he was egotistical. Tom was careless in his relationship with Daisy, his wife, and Myrtle Wilson, his lover. He allowed Gatsby to win his wifeÕs love. After Gatsby and Daisy fell in love again, all Tom could do was take his wife back and leave town for a couple of days. Tom was also unconcerned with his lover, Myrtle. He let his wife, his friends, and even MyrtleÕs husband know that they were having an affair. Obviously, Tom did not want everyone to know what he had been doing, but his careless actions revealed the truth.

Gatsby was a spendthrift with his money. He spent thousands of dollars on parties, his house, and all of his possessions just to impress his lover, Daisy. In other ways, Gatsby was overly careful. When Daisy killed Myrtle Wilson with his car, he took great precautions about the situation. He told Nick, ÒI got to West Egg by a side road,Ó he went on, Òand left the car in my garage. I donÕt think anybody saw me but of course I canÕt be sure.Ó(151)

Jordan was careless during a golf tournament. She won the match by kicking the ball into the hole when no one was looking. She was mindless because many people were watching her while she cheated. After this incident she was known as a cheater.

Meyer Wolfshiem, in comparison, was very careful. He tried to stay away from death and things that could cause trouble. He once told Nick after the death of Gatsby, ÒI canÕt do it – I canÕt get mixed up in it.Ó(180) He also commented, ÒWhen a man gets killed I never like to get mixed up in it in any way. . . .Ó(180)

The theme of carelessness in The Great Gatsby was very definite. Each person displayed characteristics that were either careless or mindful. The carelessness of the characters generally affected them in a negative way. They were careless about their relationship, their money, and many of the activities they did every day. These personality traits were almost impossible to change. The careless actions of many of the characters in The Great Gatsby affected their lives and those around them.

The Theme of Carelessness in The Great Gatsby. (2016, Jun 19). Retrieved from https://studymoose.com/the-theme-of-carelessness-in-the-great-gatsby-essay 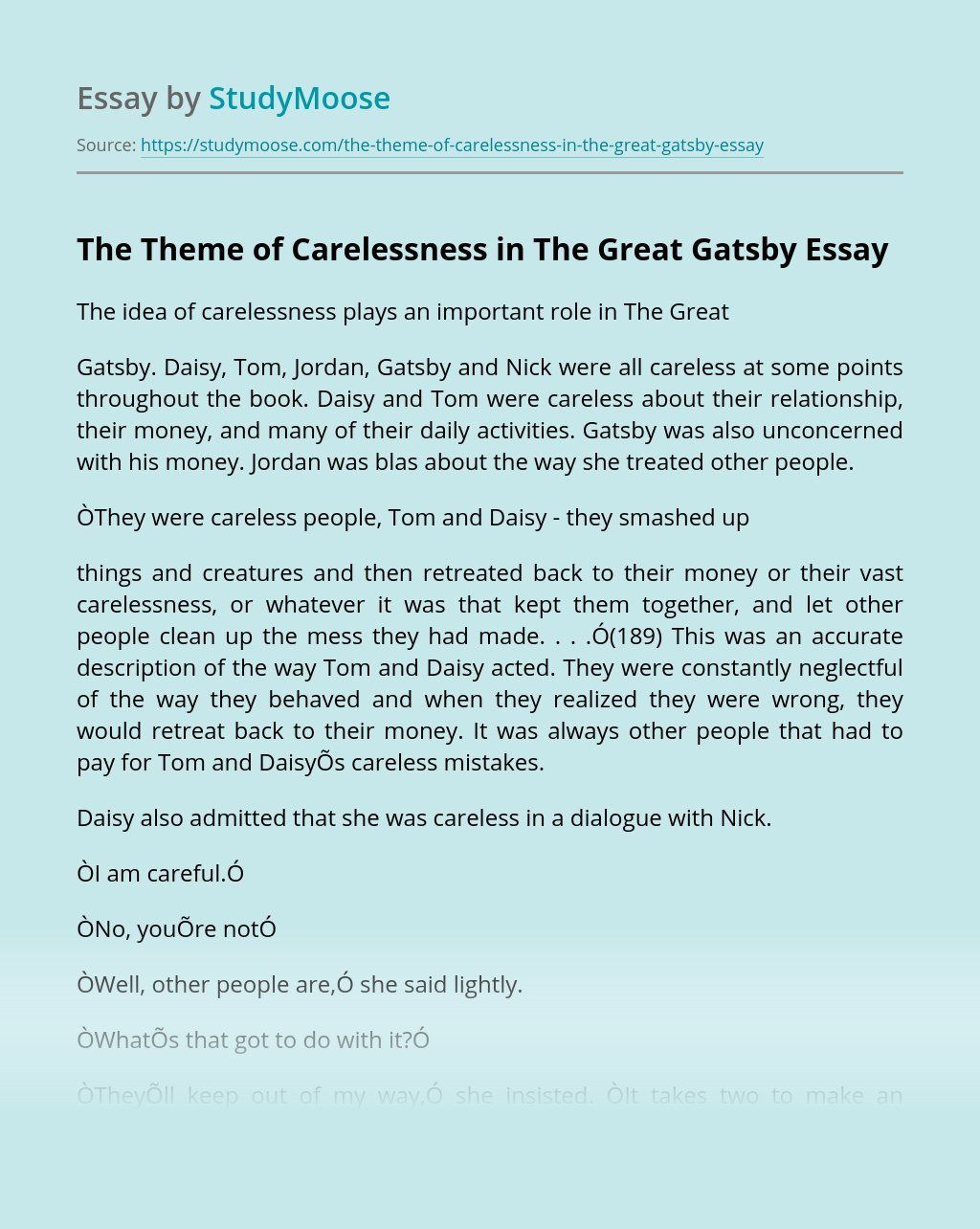 Compare the following two sentences that provide instructions to a set of employees (this Example is given in [Roy 2000]): 1. It is of considerable importance to ensure that under no circumstances should anyone fail to deactivate the overhead luminescent function at its local activation point on their departure to their place of residence, most... VIEW ESSAY

Developing a Shared VisionNameInstitutionInstructorCourseDate Developing a Shared VisionOne of the issues affecting the leaders of healthcare organizations is layoffs as a result of declining revenues. Healthcare organizations have experienced nursing shortage affecting the delivery of healthcare services (Weiss & Tilin, 2018). Don't use plagiarized sources. Get Your Custom Essay on The Theme of Carelessness in... VIEW ESSAY

Question: Some historians argue that slavery was the primary cause of the American Civil War. Utilizing the documents and your knowledge of the period 1846-1860, explain to what extent you believe this statement to be valid. Slavery started in America when the colonist traded rum and molasses with Africa in exchange for slaves, this was... VIEW ESSAY

prepared for that day dish of meat and vegetables cooked overnight and referred this as the “Daughter of Elysium”. Christopher Marlowes Doctor Faustus has put the classical and Christian attitude of the concept of the afterlife as he has said that the curse, hellfire, eternal punishment does not bother him, this does not terrify him,... VIEW ESSAY

There were many issues that Charles Dickens wanted to address in the novel because of the situation in the Victorian times. Hard Times by Charles Dickens gives a picture of one of these issues which is the different social classes being represented by the characters in the book. Mr. Bounderby and Stephen Blackpool are great... VIEW ESSAY