“The Taste of Melon” By Borden Deal

The narrator, in the story “The Taste of Melon” becomes a more mature person after the melon-stealing incident. Before he steals the prize melon, he is an impulsive person. He is a teenager not mature enough to understand the consequences of his actions and makes the decision to steal the melon without adequate forethought. This is proven when he makes the decision to steal the melon and says, “I hadn’t known I was going to say those words … It surged up out of me” (Deal 10).

Turn in your highest-quality paper
Get a qualified writer to help you with
“ “The Taste of Melon” By Borden Deal ”
Get high-quality paper
NEW! AI matching with writers

The narrator is also a self-absorbed person. He steals the melon because he believes “there was a rightness in defying the world and Mr. Wills” (Deal 11). This shows he is self-absorbed because he feels that defying the world around him is righteous and does not care about how his decisions will affect others. All he cares about is what he believes and what is good for him. Immature people tend to be more self-absorbed because they not yet have to ability to see the big picture.

After he steals the melon, he starts to think about his previous actions and makes decisions based on his new beliefs. He becomes a very conscientious person. He knows what is right from wrong and feels that he is responsible for his actions. This is shown when he says, “it was up to me, at whatever risk, to repair as well as I could the damage I had done” (Deal 14). The narrator also becomes a thoughtful person. He starts to think of others more and make considerate decisions.

Before apologizing to Mr. Wills, he is “searching out every seed [he] could find” because he knows the seeds will be at least somewhat helpful to Mr. Wills (Deal 14).

Thoughtfulness and conscientiousness grow as people mature. The narrator changes from an impulsive and self-centered character to someone who’s conscientious and thoughtful, and this is proof that he becomes a more mature person. Many teenagers make reckless decisions that lead to severe consequences. What is important is that they have the courage to accept the consequences and learn from their mistakes.

“The Taste of Melon” By Borden Deal. (2016, May 06). Retrieved from http://studymoose.com/the-taste-of-melon-by-borden-deal-essay 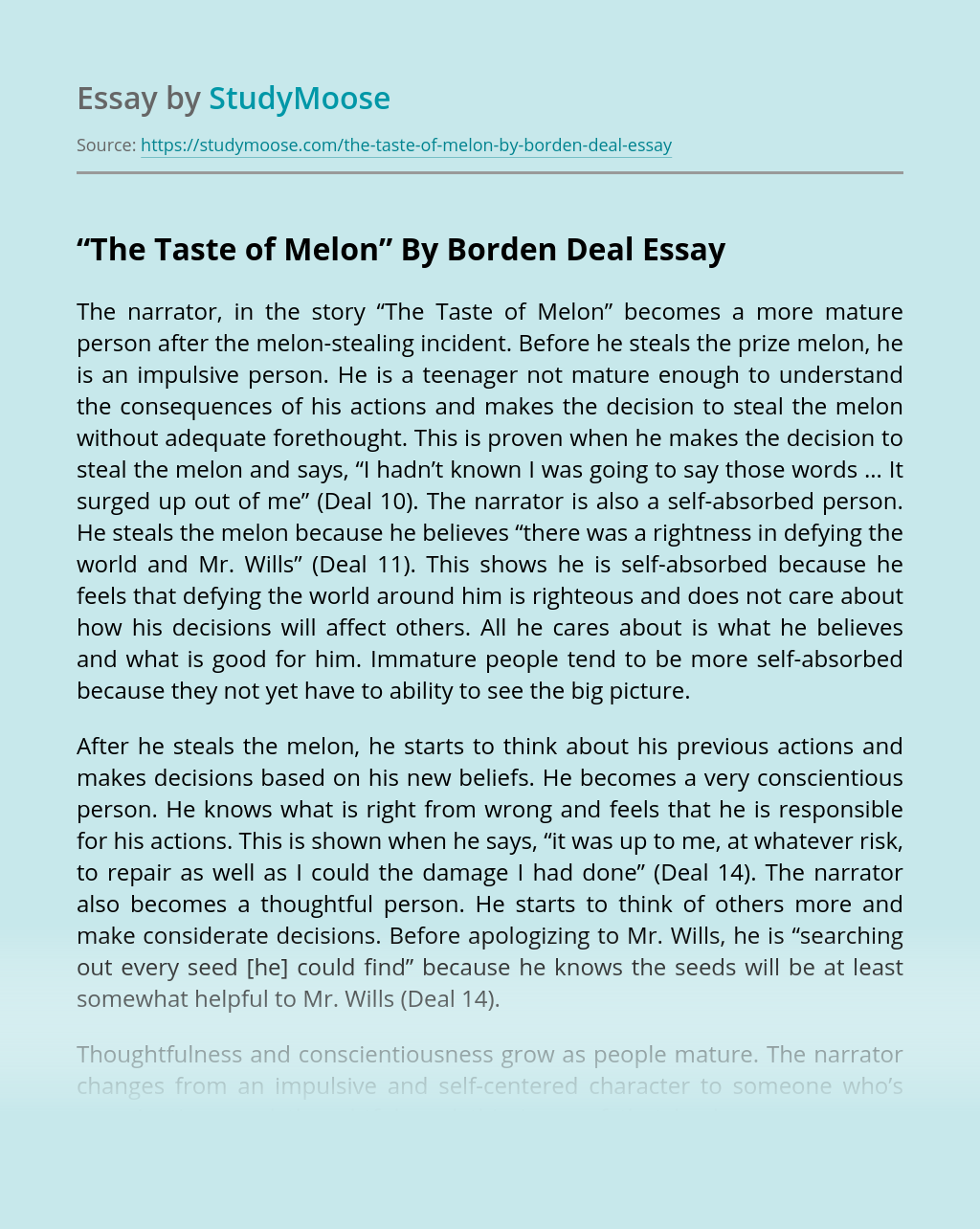 Turn in your highest-quality paper
Get a qualified writer to help you with
“ “The Taste of Melon” By Borden Deal ”
Get high-quality paper
Helping students since 2015
Stay Safe, Stay Original