Moll Flanders: From Innocence to Maturity

Moll Flanders is the central character of the novel “Moll Flanders”, who was born in Newgate, England and passed different phases of her life across England and America. The entire novel depicts those phases of her life through five marriages, among which only one was fruitful. Between her marriages and through them, the character of Moll Flanders evolves which shows her ingenuity, energy and determination to survive and do well.

Moll is born in a prison in Newgate and soon after her birth, her mother is deported to America alone, to serve her punishment.

Don't use plagiarized sources. Get your custom essay on
“ Moll Flanders: From Innocence to Maturity ”
Get custom paper
NEW! smart matching with writer

She is taken over by a group of gypsy, with whom she lived until she was three years old. Then she was raised by a nurse until she was eight. It was tradition that she should now find a job as a servant, like many other orphan children. However, this is when we see the first piece of Moll’s intelligence when she pleads that she could be a ‘gentlewoman’ with whatever little education and work skill she has achieved so far.

Soon, she becomes a celebrity and was assisted by many women and finally was taken by one of the prominent families where she grows like the other daughters of the family. So, if we look thoroughly up to this phase of Moll’s life, we see the ingenuity of her character which she keeps growing over time through the rest of the novel.

As the elder son of the family becomes physically intimate with Moll, she starts to become emotionally very intimate to him.

She starts to believe that she could be a wife someday in that house. However, soon she turns wrong and learns the about the harshness male dominance. Later, she marries the younger brother and gives birth to 2 children. We see Moll starts to become self-sufficient through this phase of life. She understands that if she wants to get herself as a respectable woman in the society, she requires the identity of being married to a gentleman. However, it is also interesting to observe that she still preserves a sense of dignity in her. The thought of lying with the elder brother for financial reason disgusts her. But she grows a perspective which decides her reaction to such events and let her choose the appropriate course of action to survive. She becomes aware of the physical relationship but at the same time she becomes pragmatic and marries the elder brother.

Soon after the death of her first husband, she gets married to a draper. But her second marriage does not last long either as the tradesman becomes a fugitive and runs away to France. And the wealth that Moll has achieved over the period of affair with the elder brother, comes down to less than half. And this is when she falls into a strange kind of problem of having no husband despite having one. But she finds a solution by concealing her true identity and becomes a trickster to get married again. It is notable that at this stage of her life, she realizes that being honest and devoted to relationship does not always settle a woman into a society. Her love for the elder brother is real but is not enough to achieve a stable life. Life teaches her to be tricky and she tricks her step-brother to marry her by vowing him that he would still marry her even if she is penniless.

After being married for the third time, Moll goes to Virginia with her husband and starts to live a happy and prosperous life. However, that does not last long as the secret is soon revealed that she has married her own half-brother. Moll’s reaction at this stage of her life is quite contrasting to the rest of her reactions previously. So far she has exposed mostly the negative aspects of her character to get a sustainable life. However, despite being happy with her step-brother, she decides to leave her. This time her moral principle wins over other consideration and she expresses her disgust over this incestuous relationship. Even her own mother cannot convince her to forget everything and live the life. So, she returns to England by leaving behind a perfect life in America.

As she returns to England, she starts to live in a place called Bath, which is known more to find a mistress than a wife. After three unsuccessful marriages, Moll becomes aware that she has to be very careful about her next relationship. She meets a banker who is ready to marry her but she denies after knowing that he already has a wife who is insane. She says she would only consider marrying him if the banker can obtain a divorce. This shows the sign of her being matured over time.

She also meets another man named Jemy, who becomes her fourth husband and perhaps her best match. Jemy is another trickster, like Moll herself. So, this phase of Moll’s life shows her calculated treatment to the male companions and her sensitivity in getting married. However, she and Jemy cross each other in the same game and they fitted each other rightly, and in later life it proves right. So, at this segment of her life, we see the little morals and bits of wisdom which shows the ultimate maturity of Moll Flanders.

Going through the life of Moll Flanders through her first four marriages, one might say she is hard to stand. But despite her less than appealing qualities, we see the development of a woman who leads a hard fought life. Interestingly, Daniel Defoe has chosen a character of low moral as the principal protagonist of this novel which is rather uncommon. But her imperfection and the nature of fluidness in her character glorify the fight of a woman from an era when they were seen as an inferior. And through the first four marriages, we see the evolution of an ordinary girl towards sensible maturity to sustain in a society which is vulnerable for women.

Moll Flanders: From Innocence to Maturity. (2017, Aug 24). Retrieved from https://studymoose.com/moll-flanders-from-innocence-to-maturity-essay 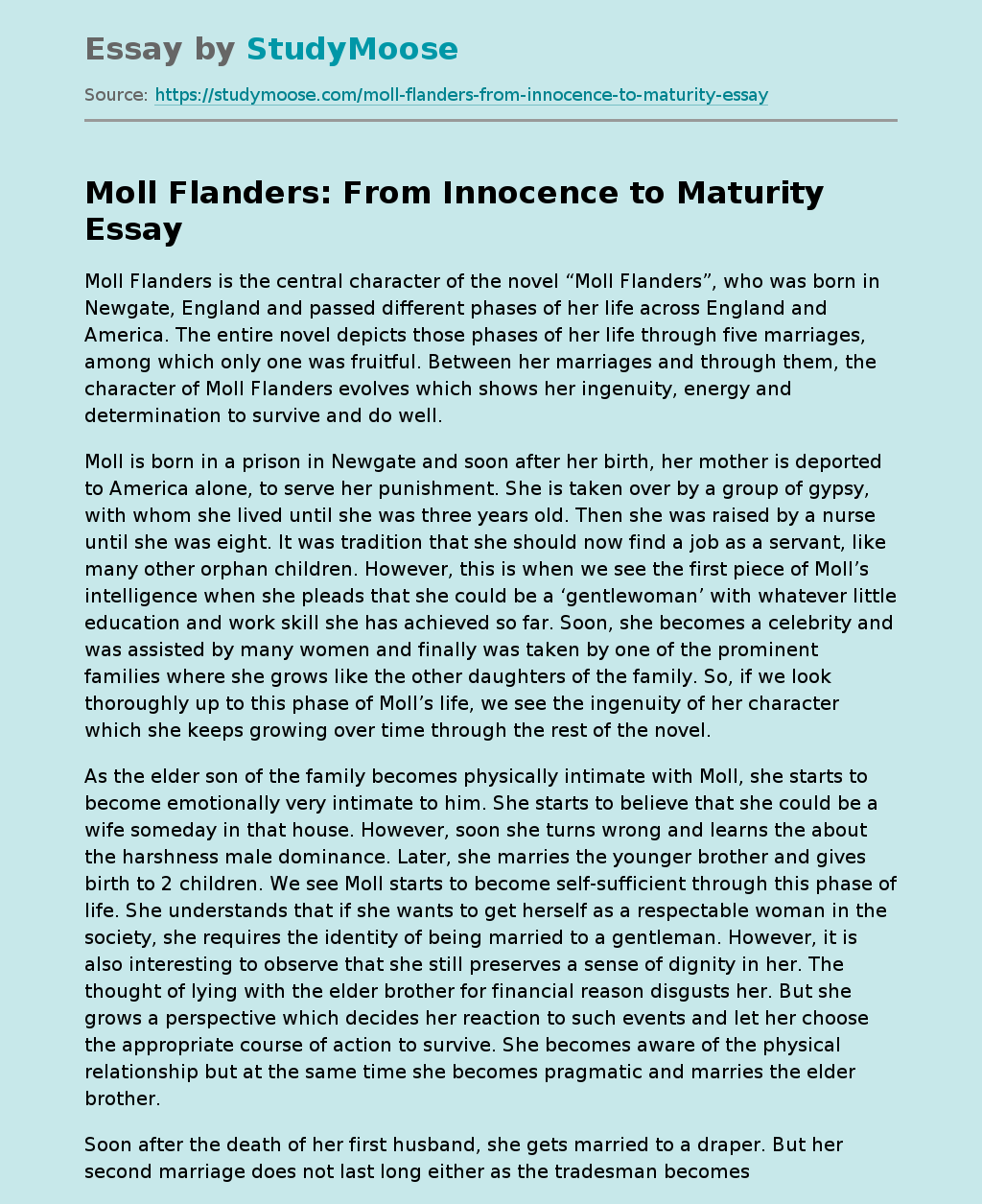