Comparison of Matilda Cook in Fever 1793

In Fever 1793, by Laurie Halse Anderson, sixteen year old Matilda (or Mattie) Cook changes dramatically over the course of the book. In the beginning, she is portrayed to be a young selfish girl who was always too lazy to work. By the end of the book, she is shown to be a strong young woman. Her family of three consisting of her grandfather, mother, and herself runs a small coffee shop. Her family usually works relentlessly before, during, and after the shop’s hours.

Don't use plagiarized sources. Get your custom essay on
“ Comparison of Matilda Cook in Fever 1793 ”
Get custom paper
NEW! smart matching with writer

Their kind slave, Eliza, works just as relentlessly around the kitchens. Mattie herself has the easy job as a waitress and usually works much less than her family and slave. Even so, she never puts her heart into her work. This demonstrates how foolish and selfish she is; but just in a few weeks her world will change epically for herself and everyone around her.

The yellow fever hits Philadelphia with venom and mercilessly takes away numerous lives.

Unfortunately, the disease finds its way to Lucille Cook, Mattie’s mother. Mattie is forced to run away with her grandfather in order to prevent herself and her grandfather from catching it. They try to find their way to a friend’s farm, but her grandfather catches the fever along the way. In desperation, Mattie picks berries and fetches water so that she and her weak grandfather can survive until help comes. In this chapter of her life, Mattie is slowly improving on her attitude and personality.

She soon gets help for her grandfather from a hospital nearby. He starts feeling better, but then she herself catches the fever. Mattie is fed and cared for the same way as her grandfather. He soon recovers and takes care of Mattie. She in time gets better and decides with her grandfather that it is time to head home.

When the travelling pair reaches Philadelphia, they find objects carelessly strewn across the paths. Houses are desolate and empty; bodies pile up in the graveyard. Their own coffee house is in ruins and Mattie’s mother is not to be found. Mattie and her grandfather try to strive as long as they can. During that time, Mattie hauls in water from the well, picks and chooses in their rotten garden, and uses what is not stolen in the kitchen for the rest of their meals. They are doing alright for the first few nights, but a few nights later, a robbery occurs that takes Mattie’s grandfather’s life away. In grief, she allows the cart for the dead to take him to the graveyard and follows it to the graveyard. There she mourns for the dead who were taken by the fever, or less commonly from robberies that took Mattie’s grandfather away.

In desperation, Mattie proceeds to find Eliza. Along the way, she comes across a young orphan named Nell and brings her along. Mattie soon finds herself living with Eliza, a pair of twins, Nell, and Joseph. She works in the day and late into the night feeding the needy; until the fever takes a toll on Nell and the twins. The house is too crowded for sick individuals, so Eliza and Mattie move the children along with themselves to the coffee shop for recovery. They care for the children as best to their abilities and hope that that the ill children will last until winter when the frost could chase the fever away. Fever 1793 is a wonderful book about a young foolish girl turning into a mature and hardworking young lady. Through the course of this book, Mattie demonstrates how she can change from a selfish immature girl into a selfless, hardworking, and mature lady. 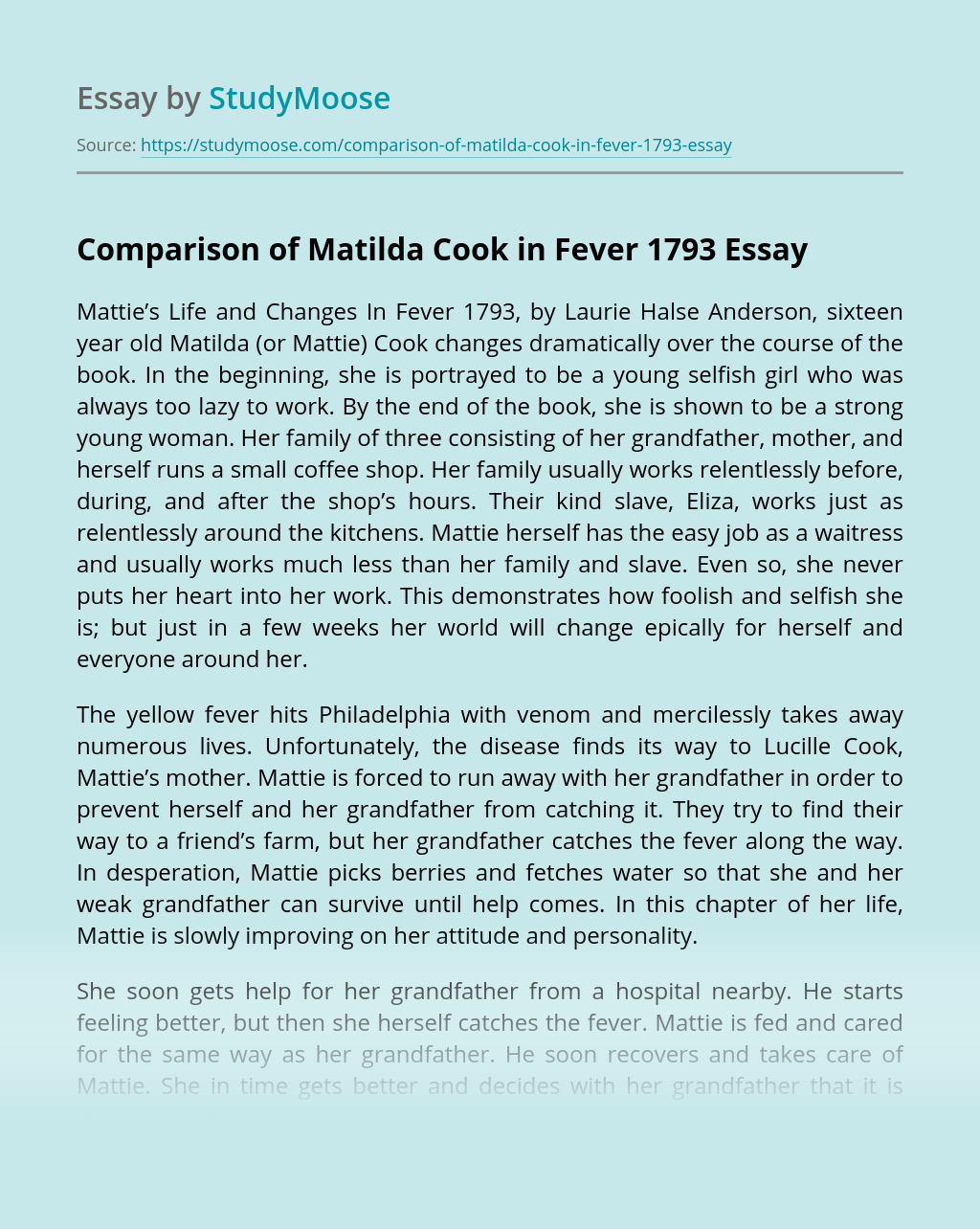