The Taming of the Shrew: Petruchio and Katherina's Relationship

Everyone has an opinion about Petruchio and Katherina’s relationship. What is yours? There are many possible interpretations of the relationship between Petruchio and Katherina. A very superficial reading of the play might lead one to conclude for instance that it is an extremely sexist relationship and shows a man like Petruchio taking control of a ‘shrew’ like woman, in order to gain a dowry, the methods he uses both physically violent and psychologically crushing.

Another interpretation might be that the play portrays a man and a woman, both of them hot headed and determined, working through their difficulties with one another, using exaggerated comic actions.

Don't use plagiarized sources. Get your custom essay on
“ The Taming of the Shrew: Petruchio and Katherina’s Relationship ”
Get custom paper
NEW! smart matching with writer

A more feasible explanation probably lies somewhere between these two extremes, or as a clever compromise between the two. This essay sets out to debate whether or not the relationship between Petruchio and Katherina has some depth, or whether it is simply a demonstration of the gross sexism displayed towards women in Elizabethan society.

There is a lot of evidence to suggest that this play is purely sexist and that the relationship between Katherina and Petruchio has nothing to do with love.

For instance, when we first meet Katherina she is treated with contempt even by her father; he tries to marry her off to two older men Gremio or Hortensio. They refuse her and call her a “wench” and “mad”, Baptista her father, does not defend her in any way, even when Katherina pleads with him “I pray you , sir, is it your will to make a stale of me amongst these mates? “.

He then jumps at the chance to marry her off to Petruchio, not having met him for very long at all. Baptista also insisted that Katherina be married before Bianca in order to ensure that they are both wed. Neither Katherina nor Bianca get a say in this, they have to obey their father, just as Katherina is made to obey Petruchio. It is possible that all Katherina is to her father, is a thorn in his flesh that he is trying desperately to pass on to someone else. When Petruchio first asks for Baptista’s consent to marry Katherina, he immediately inquires; “What dowry shall I have with her to wife?

Which shows that obviously he was more concerned about the money than the love of a wife. This suggests the relationship has a lot to do with what Petruchio wants, as he is the dominant male as far as Katherina is concerned. Before he even meets Katherina he says he is seeking “fortunes”, and when Katherina is described in a very ill way by Hortensio, Petruchio’s reply is “Thou know’st not gold’s effect”, again advocating that Petruchio did not care who he married, as long as money came into the picture.

The fact that he did not care what kind of wife he had seems to tell us that he was never looking for love in the first place, which possibly has something to do with the context of the time, but it certainly seems that Petruchio is solely a heartless rogue. When Petruchio and Katherina first meet, Petruchio does not listen to a word she says as his only goal seems to be to marry her. He neither seems to respects nor listens to what she wants.

When she tells him “They call me Katherine”, he ignores this and as if to mock her, he excessively uses the name “Kate” whilst addressing her. This immediately leads one to believe that he has little care for her feelings. Petruchio then proceeds to ridicule her, with use of puns and crude sexual innuendos. This is a novel way, to say the least, of winning a lady’s favor. Already he seems to be attacking her verbally. When Katherina takes offense to this, as any respected woman is likely to, she hits him and he threatens: “I swear I’ll cuff you if you strike again.

” Threatening to physically abuse a woman, who is so much weaker than himself, exposes him straight away as a violent character, and this may prove in some ways that she was beaten into submission by the end of the play, through this abuse. Petruchio, then conceited as he is, tells Baptista and various others that “‘Tis bargained” and Kate had agreed to marry him. He is not a very truthful man, and only through these methods does he manage to subdue Katherina. The next time the couple meet is at their own wedding. Petruchio turns up in a ridiculous outfit possibly to symbolize his control over Katherina.

Simply by wearing the costume, he is able to humiliate her. It may be shameful for Kate to be matched to someone in such attire, but she knows she has no choice, for her father is so keen for her to marry, and she as all women would, does not wish to end up an old maid. She consents to let the ceremony proceed, even with Petruchio dressed in a clown like costume, thus she yields to his authority before the wedding even begins. The outfit may also symbolize the transient nature of clothing. Petruchio also turns up seemingly drunk to his own wedding, showing his lack of real commitment to Katherina as a wife.

He wouldn’t allow her to stay for the Bridal dinner, and when Katherina says “Now, if you love me, stay. ” Petruchio refuses and drags her off on a long gruelling journey to his home. Again this seems to imply that love has nothing to do with this relationship. Then comes Petruchio’s falcon speech. In this speech he compares his taming of Katherina to the taming of a hawk. His first line in this speech straight away is very explanatory of what he feels his position is with Katherina: “Thus hate I politically begun my reign”. He sees himself as a king or a ruler over his wife.

This is an obvious point to direct the fact that there was never any equality or understanding in their relationship. He tells the audience that “She ate no meat today, nor none shall eat”. He is starving her like a hawk, training her to obedient and come to him like a Hawk, as she does in the end, when she comes obediently to him and says “What is your will, sir, that you send for me? ” Also, he keeps her awake all night to keep her wary, as would happen in Hawk training. At the end of the play, there is sufficient evidence to prove that she has been beaten down by Petruchio’s hawk plan; her end speech shows this.

She tells Bianca and the widow “Dart not scornful glances from those eyes, to wound thy lord, thy king”. She has been brought to believe this of Petruchio. On the other hand, there are many reasons for us to believe that there is more depth to the relationship than is initially seen. For instance at the end of his Hawk speech he says “He that knows better how to tame a shrew, Now let him speak – ’tis charity to show. ” This leads the audience to question if there is a better way to tame Katherina. She too was rude and spiteful to him when they first met, and perhaps he was just fighting fire with fire.

The Taming of the Shrew: Petruchio and Katherina's Relationship. (2020, Jun 02). Retrieved from https://studymoose.com/the-taming-of-the-shrew-petruchio-and-katherinas-relationship-essay 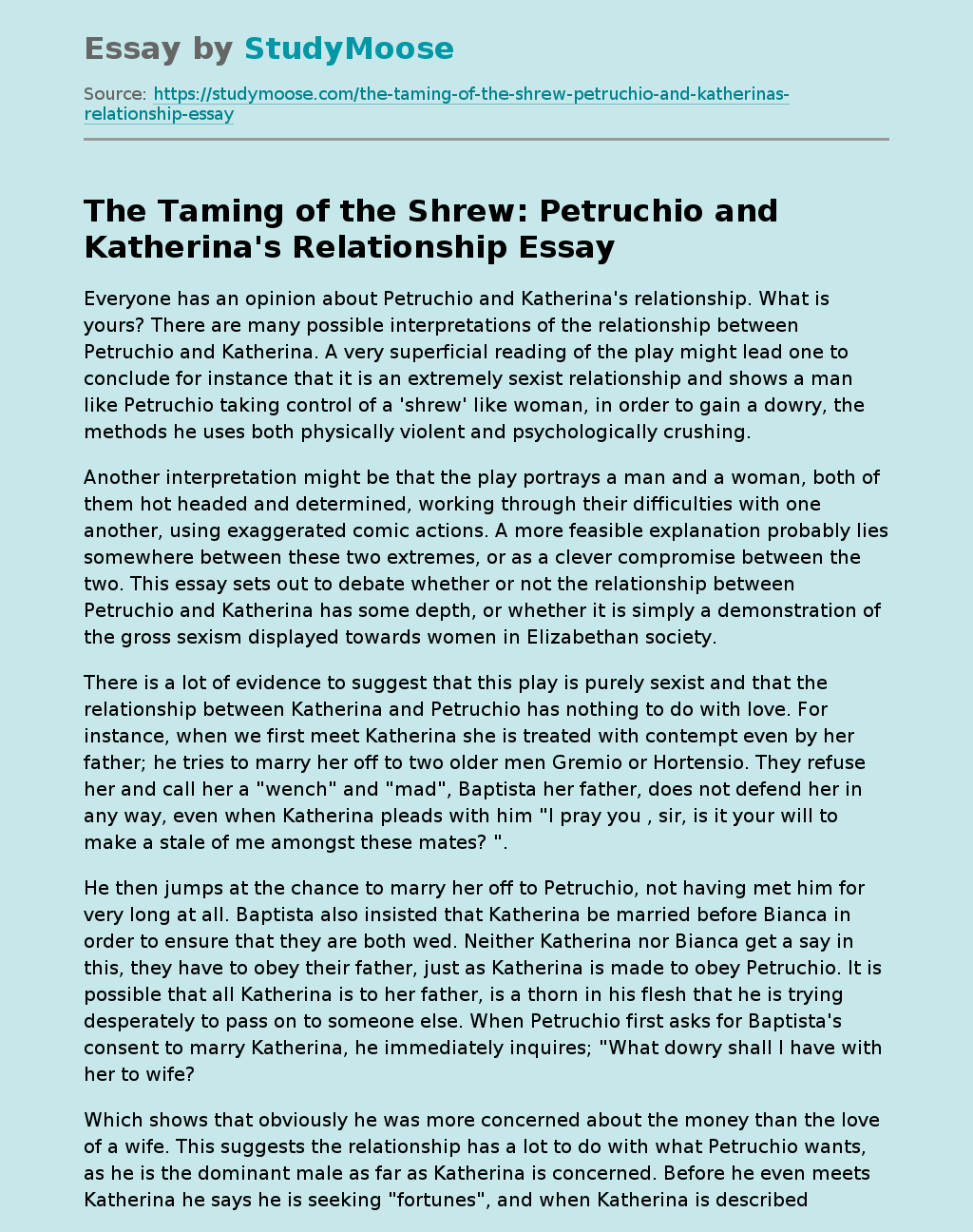