10 Things and Taming of the Shrew Comparison

The playwright of Taming of the Shrew, by Shakespeare, and the film text 10 Things I Hate about You, directed by Gil Junga, convey similar plots, however, the composition of these two texts spreads across 400 years. With this, audiences who have experienced both of these texts can witness the differences of the society within the 17th and the 20th century. This is conveyed through the social context of both era’s (the Elizabethan Era and 20th century USA) and also the Shakespearean language in contrast with the colloquial language.

Don't use plagiarized sources. Get your custom essay on
“ 10 Things and Taming of the Shrew Comparison ”
Get custom paper
NEW! smart matching with writer

Not only do these play a part, but the gender roles of both women and men are distinctly represented.

Finally, the plot and events of both texts coincide with the other issues mentioned. Through all this, there are still discrete and direct links of 10 Things I Hate about You with Taming of the Shrew. Although the modern day appropriation of The Shrew, 10 Things, follows the same storyline and plot, the social context completely contrasts with that of The Shrew.

One aspect of where this put across is how men were considered to be superior to women in the Elizabethan Era, compared to the equal values of both men and women in the 20th century.

These related to audiences of both centuries as society considered this to be the correct way of living. The quote made by Pertruchio towards Katherina, “Women are made to bear, and so are you. ” (Act 2, Scene 1, Line 203) portrays how a woman must obey that of a man in the 17th century.

The language used from both texts reflects and appeal to the audiences of the different time periods. Shakespeare uses quite poetic and refined language to gain interest of the audiences of that time. Gil Junga in his film text has quite rough edged, colloquial language, to replica modern teenagers. However both playwright and director allocate different levels of language to different participants of their text to convey social standard, education rank and hierarchy. “Y’are a baggage. ” (Induction 1, line 3) This is spoken by Christopher Sly, a drunken man in a bar who is at the bottom of the social hierarchy.

Compared to the Lord Huntsman, “I charge thee, tender well my hounds” (induction 1, line 12) who uses sophisticated language. This is mirrored in 10 Things with Kat and Chastity (Bianca’s best friend). Kat is obviously highly educated, and in the scene with all the cars and students in the beginning of the film, Kat makes a remark of, “Remove head from sphincter, then drive. ” As she almost crashes into Michael. Compared to Chastity in the same scene, in a somewhat, “stupid” manner, she questions, “I know you can be underwhelmed, and you can be overwhelmed, but can you just be ‘whelmed’? Gender roles within the two texts can be considered the most important aspects of both centuries.

In the Elizabethan era, the role of women was to obey the word of a man. They were not expected to have an opinion. They were to get married and be the nurturers of the family. Rebellious women were classified as “shrews”. On the other side of the spectrum, women in the modern day film have equal values and rites of men. This is put across majorly by Kat. She is classified as a “Heinous bitch” by her peers. As viewed in her English lessons, she has her own opinion.

She recites her favourite writers who are famous feminist women, such as Charlotte Bronte and Sylvia Plath. Conclusions can be made that Kat herself is a feminist. However, due to lack of opinions made by women in Elizabethan times, Katherina is unable to explain why she is the way she is. Katherina’s modern counterpart, Kat has the option to compose statements and opinions. The scene in which Kat and Bianca are in Bianca’s room, Kat explains how she once dated Joey in the Ninth Grade, however Joey was trying to take advantage of her.

The result is her present, objective opinions, her personality and behaviour. Finally, the plot and events of both texts reflect the time and culture they were written in. The key plots of these texts are relatively identical – everyone wants Bianca, however Katherina/Kat must be taken first. The aspect of “marriage” has been altered to “dating” to reflect the social context. A man from a distant place – Pertruchio (from Verona) and Patrick Verona (from Australia) – is introduced to try and woo Kat/Katherina. The dowry is replaced by money from Joey to date Kat.

However, the ending greatly differs to The Shrew. Patrick realizes he has started to have genuine feelings for Kat, unlike Pertruchio who continues to abuse Katherina. Patrick publically expresses his love to Kat with the pole scene in which he sings and dances to “Can’t Take My Eyes off of You”. The lyrics state, “I love you baby, and if it’s quite alright, I need you baby. ” In Shakespearean times, public affection was rarely or never expressed. Finally, the film concludes with both Kat and Patrick genuinely in love with one another.

In comparison to The Shrew, Katherina reluctantly decides to obey the bidding of her husband, Pertruchio. It was considered “normal” for this particular time and culture to follow the words of a man and have no opinion. Taming of the Shrew and 10 Things I Hate about You hold insight of the revolution of time and how all texts reflect the time and culture they were written in. This is depicted through the social context of the 17th and 20th century, and changes in language structure and form, the alteration of gender roles and finally, the plot and events through the changes of social context.

10 Things and Taming of the Shrew Comparison. (2016, Dec 22). Retrieved from https://studymoose.com/10-things-and-taming-of-the-shrew-comparison-essay 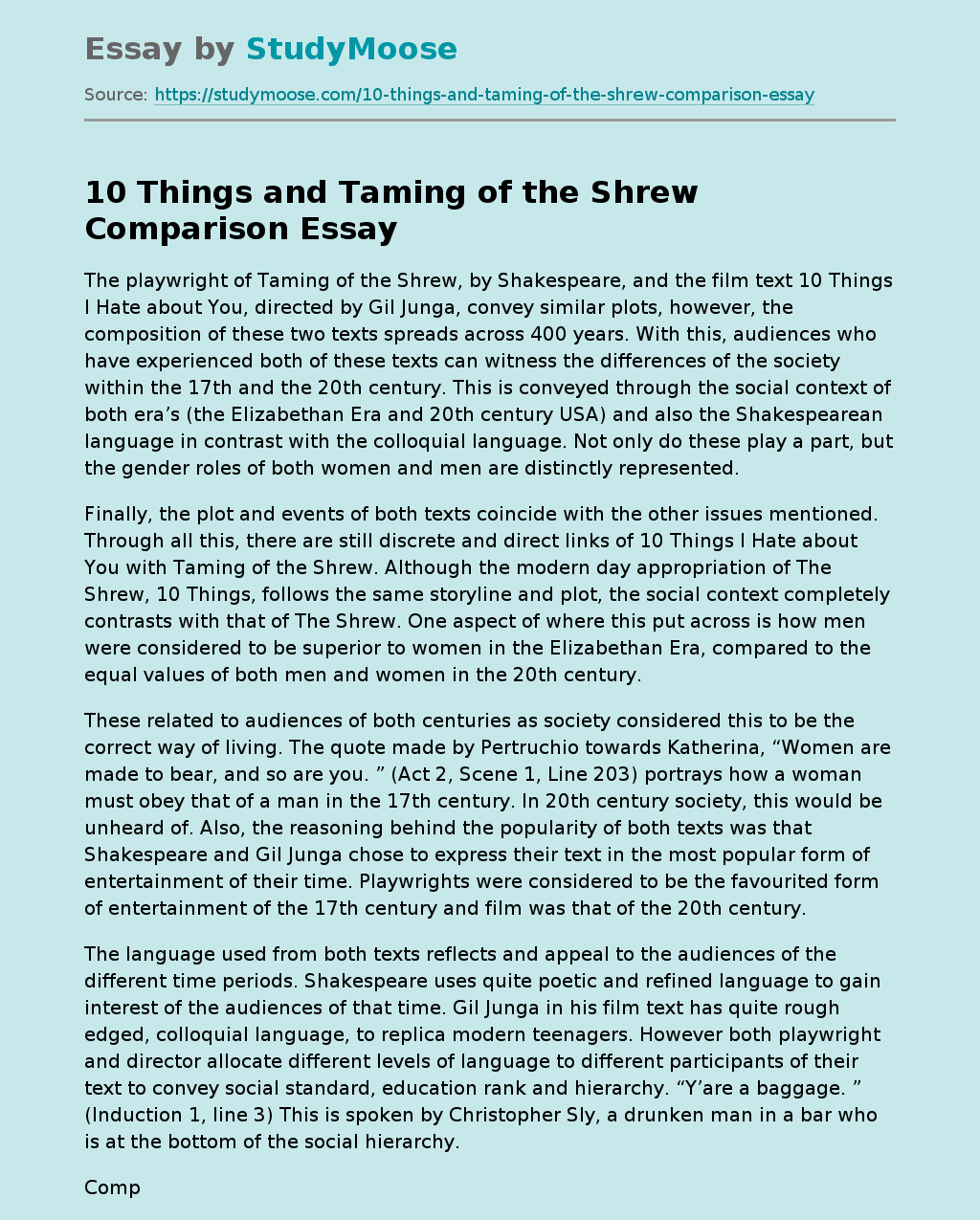