IntroductionThe Taming of the Shrew is one of Shakespeares most popular plays. Its wit and comedy revolves around Kate Minola, a strong-willed woman who is seen as a shrew due to her unwillingness to conform to the unwritten rules of lady-hood and Pertruchio who is convinced he was born to tame [Kate]. The most obvious and major question would then be, was Katherine tamed by the end of the play? To be tamed, one would have to be forcibly changed into submissive obedience.

Don't use plagiarized sources. Get your custom essay on
“ Is Kate Minola tamed by the end of “Taming of the Shrew” by William Shakespeare ”
Get custom paper
NEW! smart matching with writer

A tamed being would obey there master unquestionably in order to obtain a reward or avoid a punishment.

I believe, although Kate has changed by the end of the play, she was not tamed but liberated. Although she acts just as Pertruchio demands, she is not submissive but in fact, has objectives of her own. BodyI would like to start by answering the questions as to why Kate is stark mad or wonderful forward to begin with. Kate has grown up being the loser in a competition with her sister in terms of suitors and the respect of there father.

Baptista cherishes Bianca while not even defending Kate on the streets when people insulted, calling her too rough or fiend of hell.

At the beginning of Act 2, it can be seen that Kate is jealous of Bianca. On top of that, Baptista automatically assumes that the fight was Kates fault and This combination of her frustration to the fact that that Bianca has an army of suitors while she seemingly will end up alone and the neglect, humiliation and lack of respect from her father can and did undoubtedly pushed her to become the angry person she is.

Her isolation and anger is a cycle. Her strong-will and violence pushes people the people around her away, causing her to be more frustrated and angry which furthers her alienation.

I believe Pertruchio was not successful in taming her but was successful freeing her of the cycle and showing her all the benefits of a better behavior. Her anger towards herself and others due to loneliness is broken by Pertruchios will to match Kates ferocity and compliment her. This has never happened to her before and I believe it gave her the attention she has always longer for. In the beginning the attention was quite obnoxious especially when it came to Pertruchio and his servants. He was angry and violent towards them much like the way Kate acted before and you can tell that she saw the horror of that behavior.

Pertruchio did many things like keep her up and not feed her and after that, she most likely longed for a more peaceful environment and perhaps, if she conformed, she is able to receive better love, love that her father never gave her. I think Pertruchio also showed her that she no longer has to be mad at herself. She has a husband who loves her and therefore, the cycle is broken. Before Kate was focused on challenging the status quo and feeling sorry for herself. Petruccio took both those thoughts from her head and threw them out the window.

He taught her that as long as she was happy, she shouldnt care what other people think of her. Like how he showed up at the wedding dressed like a fool. With that she is able to finally fit society show it off for all the people who had no faith in or time for her. Kates true identity is finally revealed and able to shine brightly with Pertruchio by her side. Before Pertruchio, Kate was able to get her way by being violent. However, Pertruchio strong-willed personality will not bend under her old weapon of emotional and physical lashing. I think she realizes this.

The situation has already happened and cannot be reversed. She did not get tamed but learned to adapt and fight through other means. Switching up the technique and attacking from the inside. Perhaps, this is what Pertruchio wanted to show her. That by listening to him and being ACTING tamed, she can control the direction of her path. For example, by kiss him, they could stay at the party, by agreeing with the moon, she could go. In the beginning, Kate was refused a cap because she wasnt gentle and when she finally was, she was offered it.

Listening to Pertruchio and sacrificing a little bit, she was able to gain a lot. By compromising, she would have the respect of Pertruchio who she could then use to obtain her desires, such as the nice gown and cap. With a strong husband, she could hold more power than she could even dream of under the title of the shrew. To a much larger extent, she can be happy. ConclusionIt is clear that by the end of the play, Kate has changed to a whole new person. But was Pertruchio successful in taming her? I believe he wasnt, however, he was able to show her the advantages of the other side.

Pertruchios abusive techniques did not turn her to be submissive and obedient but liberated her of a false personality of unloveliness and violence spawned from her past. By compromising, Kate realized that she is not only able to achieve her materialistic goals like going to her fathers house or a nice gown and cap, but also respect, power and happiness way beyond what she was able to achieve before with anger. All these personal gains lead to conclude that Kate was not tamed but simply changed herself to achieve her own goals.

Is Kate Minola tamed by the end of "Taming of the Shrew" by William Shakespeare. (2016, Sep 20). Retrieved from https://studymoose.com/is-kate-minola-tamed-by-the-end-of-taming-of-the-shrew-by-william-shakespeare-essay 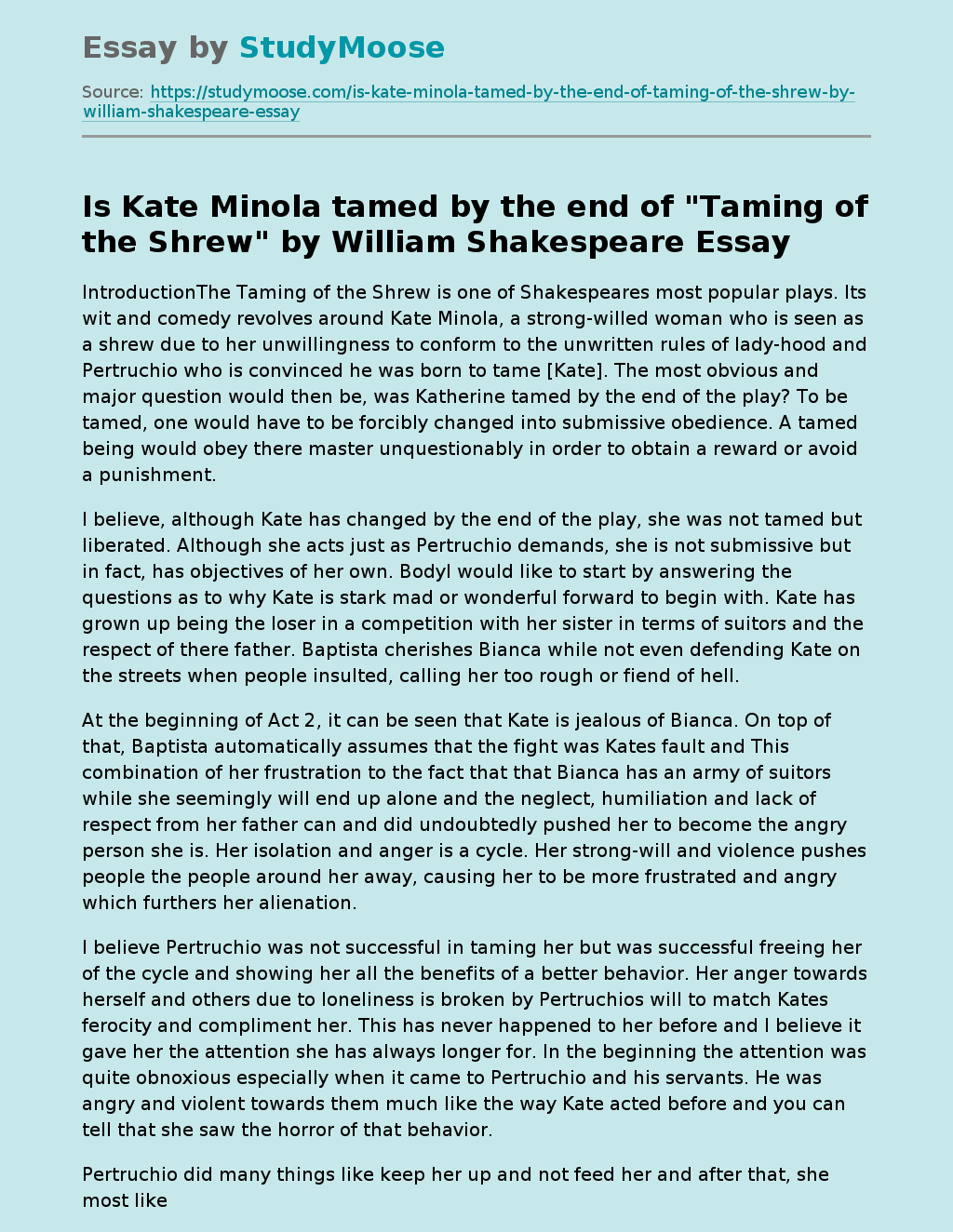