The Taming of the Shrew

The character of Kate in William Shakespeare’s The Taming Of The Shrew is an outspoken and stubborn young woman living in Italy during the sixteenth century. Her independence and willful attitude mean that she often has difficulty conforming to social norms and fulfilling society’s expectations of her. Kate is pressured into marrying Petruchio, her only suitor, whose sights are set on her dowry. Petruchio proves an abusive husband, depriving her of food and sleep in an attempt to “tame” her.

Don't use plagiarized sources. Get your custom essay on
“ The Taming of the Shrew ”
Get custom paper
NEW! smart matching with writer

Kate, in her turn, is spiteful and even violent toward Petruchio, and acts the part of the “shrew” quite well throughout the book.

In the final scene, Kate appears to have a change of heart, however. Upon witnessing her sister, Bianca disobeying her own husband, Kate drags her in front of a crowd of wedding guests, and proceeds to deliver a lecture. Kate reprimands Bianca for her unkindness to her “lord,” her “king,” her “governor,” (V. 2) and then elaborately professes her own love for and willingness to serve Petruchio.

Proficient in: Taming of The Shrew

In spite of her words, however, Kate’s attitude toward her husband has not changed, her speech is a show, and she is profiting considerably from putting it on.

Kate has spent so very long acting the part of the shrew, it would take a great deal of persuasion to transform her as completely as she appears to have been transformed. More persuasion, I believe, than was given her in the play. Throughout the entire story, Kate has been disdainful, cynical and stubborn; and as anyone who has ever been in an argument will agree, a person does not spend his (or her, as the case may be) entire life staunchly defending their beliefs, only to suddenly renounce them.

Kate relentlessly resisted Petruchio’s attempts to “tame” her, as she tells her wedding guests in Act III, “a woman may be made a fool if she had not a spirit to resist” (III. 2). And yet, Kate eats her words during the final scene of the play, conceding that women are “bound to serve, love and obey” (V. 2). This is far too radical a change to occur overnight; and while Kate may have reason enough to fake such a dramatic about-face, her true feelings remain the same. Readers must consider that Kate has had little or no food or sleep since her edding; Petruchio has kept both from her as punishment for her shrewishness.

In Act III, Kate says she is “starved for meat [and] giddy for lack of sleep” (IV. 3). By putting on a facade of love and obedience, she is quite literally trying to save herself from starvation. Similarly, Petruchio brings a tailor and a haberdasher to his house to outfit Kate for Bianca’s wedding feast. The haberdasher presents a hat, and while Petruchio insists that the hat is badly made and that his “honey love” deserves better, Kate claims that “gentlewomen wear such hats. Petruchio, in a moment of honesty, tells Kate, “When you are gentle you shall have one too,/And not till then”(IV). In doing so, he admits for the first time that his neglect of Kate is really only a scheme to force her into docility. Perhaps it is this statement which finally causes Kate to change her ways—that is to say, she realizes that in order to get the hat, or indeed anything she wants, she need only play nicely.

Finally, and most importantly, through Kate’s speech Shakespeare is making a statement about the subtle roles of men versus women in Elizabethan society. Petruchio spends the entire play trying to teach Kate to be obedient. In the end, however, Kate learns a lesson that her husband never intended to teach her: that only through obedience can she truly have power. Her many years as the shrew yield nothing for her, indeed, she is often punished for her temperament, especially by Petruchio. Kate fights him, but constantly comes out on the bottom.

The moment she submits to him, however, it is Petruchio who becomes the fool, and while it takes Kate some time to realize what this means for her, we are given evidence, through her speech, that she will use this to her advantage all through the rest of her married life. In the final Act, When Petruchio and Kate are about to arrive at the feast, Petruchio tells Kate to kiss him. Kate at first refuses, but when he threatens to take her home, she gives in(V. 1). Thus, Kate uses Petruchio to get exactly what she wants. She is still the shrew, but she is now, at least, a more worldly shrew.

The Taming of the Shrew. (2016, Dec 19). Retrieved from https://studymoose.com/the-taming-of-the-shrew-essay 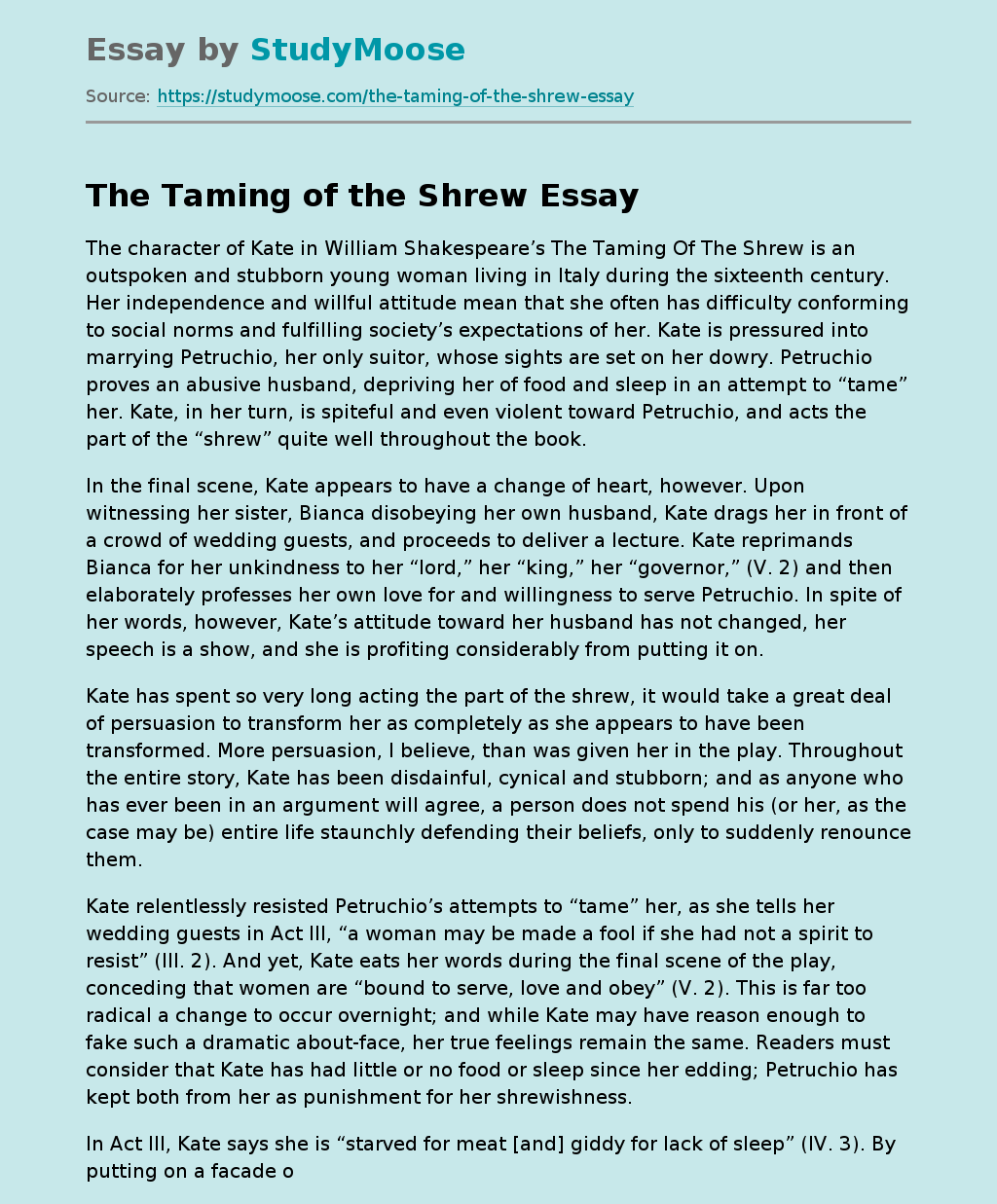