In the movie “10 Things I Hate About You”, there are a lot of similarities to “The Taming of the Shrew” by William Shakespeare. For example, most of the similarities have to do with power relationships, courtship and dating, and sisters. The main characters in both the writing and movie have the same personalities. Bianca is played as the perfect innocent teenager and Kate is portrayed as a spiteful, bad tempered person. Also, their father is still very strict. As one would think, the themes between these two pieces are very alike as well.

Don't use plagiarized sources. Get your custom essay on
“ Comparison Between the Taming of the Shrew and 10 Things I Hate About You ”
Get custom paper
NEW! smart matching with writer

The theme of many people wanting to all date the same person relates to both of these pieces. For example, in the movie the two boys are fighting over who gets Bianca, just like in Shakespeare’s writing. Both of the plots have the same general idea too. They are both about a younger sister forbidden to date/marry before the cruel older sister does so. Both stories have similarities and differences in plot, theme and characters.

Bianca and Kate are sisters who face sibling rivalry between each other.

It is more apparent in the movie of “10 Things I Hate About You” that Kate is resentful towards Bianca for being favored by their father. It is obvious to her that Bianca is appreciated more than her. One of the most noticeable power relationships is between Batista and his daughters Kate and Bianca. This is because he makes it very clear that Bianca isn’t allowed to marry until Kate is married, but in the movie they are only allowed to date.

Also, Bianca knows that her father compares her to Kate when he says that she is not allowed to date until Kate does first.

A different type of relationship shown in these stories is deception. The female ideas on courtship/dating in this movie is very different from in Shakespeare’s writing. For example, in the modern movie it is more common to date and isn’t so serious as in the writing of “The Taming of the Shrew” because they ordinarily get married young. Shakespeare made the writing of “The Taming of the Shrew” universal so that any audience can understand it and enabled it to be made into a modern film. Although there are many similarities there had to be different changes made so that the movie would appeal to people nowadays.

Something that was stressed more in the modern movie was the dishonesty and deception with who Kate was dating/marrying. In the movie, her date was paid to take her out and she eventually found out the truth and was very upset but in the story written by Shakespeare, she did not figure it out and lived happily ever after. It is more common for modern viewers to relate to the betrayal and it was expected more because of the circumstances. Overall, “The Taming of the Shrew” and “10 Things I Hate About You” are very similar and bring back an old tale with a modern twist that everyone can relate to.

Comparison Between the Taming of the Shrew and 10 Things I Hate About You. (2016, Oct 03). Retrieved from https://studymoose.com/comparison-between-the-taming-of-the-shrew-and-10-things-i-hate-about-you-essay 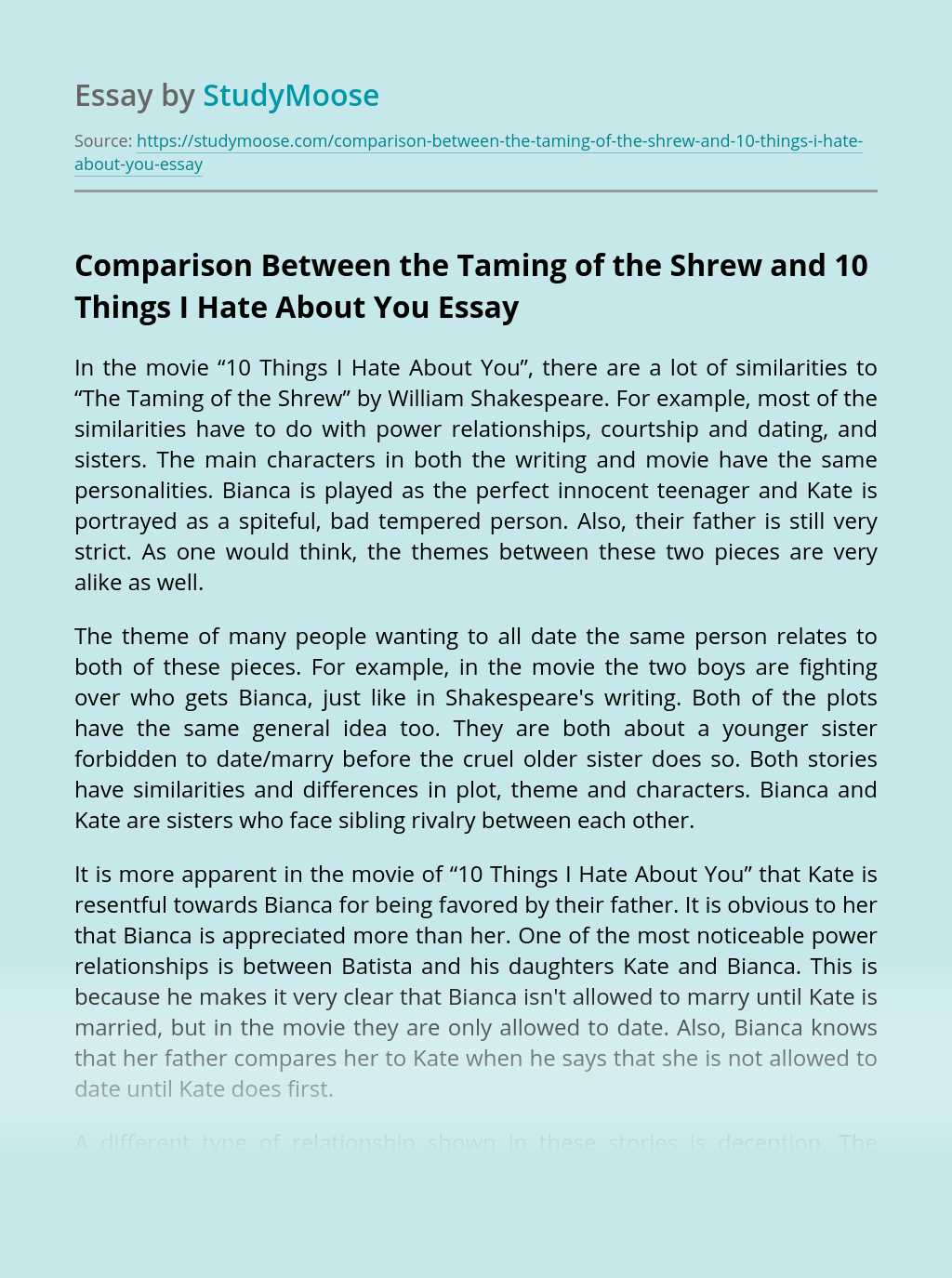