The Story of an Indian Woman

To those who lack the real understanding of poetry, it is seen no differently as any other literary composition; a text, written and understood by a certain group of people. However to those who appreciate, and possess even the slightest bit of understanding that the poet intended, is considered an accomplishment. Poetry is an art of discovery, it requires immense effort not only to understand but to compose. Indian Woman, a poem written by Jeanette Armstrong, evokes a number of emotions and thoughts.

Don't use plagiarized sources.
Get Your Custom Essay on The Story of an Indian Woman Just from $13,9/Page

The poem describes the unfortunate lifestyle of an Indian women in that day and age, the duties and tasks which were performed, whether willingly or not. Indian Woman is a poem containing painful images, internal structure, and voice. Without the usage of these three easily understood literary terms, Jeanette Armstrong’s Indian Woman would lack it’s mood, and tone which makes the poem to represent such meaning .

Imagery appeals to any one of the five senses.

In Indian Woman, readers are able to see, feel, and hear the pain, and struggle faced by the Indian woman. “The lines / cut deep / into my aged face…” (stanza 6, lines 1-3). Readers are given a vague description and while this description is not detailed, there is a sudden ability to visualize the Indian woman who is “…to be painted or photographed / sold / and hung on lawyers walls” (stanza 6, lines 9-11). The lines cut deep in which she describes are on her aged face, are not those of wrinkles, but of when she was beaten and raped (stanza 4, lines 8-10). However she has no pity, yet uses a somewhat sarcastic tone to her voice. “…are not from bitterness / or despair / at seeing my clan destroyed / one by one…” (stanza 6, lines 4-7) as though she does feel such emotions, yet due to the fact that she is a strong woman, will not allow those feelings to show through her face.

“The husky laughter…” (stanza 8, line 1) appeals to the reader’s hearing, although there is a lack from whom this “husky laughter” is owned by, the reader could possibly associate it with that of someone who is happy and therefore not enduring what the Indian woman faces everyday. Quite possibly, the laughter is that of the men who beat, rape, and now hold captive of the Indian woman. Laughter which is associated with happiness is none of what should be had at this time as the poem continues “…is not from caring / but from the ravaged / beat of black wings / rattling against the bars…”(stanza 8, line 6-9), bars which are usually identified by prison, and therefore being held captive. The Indian woman is being held captive as men ridicule her.“…something is wrong here.” (stanza 8, line 12), she is aware of the fact that what is being done to her is wrong. While the readers continue, a story of such events is playing in their heads.

Indian Woman is a poem which describes the hardships faced by women in the aboriginal community. To understand the internal structure, one must decipher the underlying meaning behind the poem. The poem is blunt, and somewhat ironic:

“…my brown body
carries no hint
of the need
to be caressed
desired
loved
Its only use
to be raped
beaten and bludgeoned…” (stanza 4, lines 3-8)

What woman does not want to be loved? Possibly due to the pain which she has been exposed to by men denies her the want for attention which is so forced upon her as she is raped. She is beaten, and stands strong although it seems that the only reason she does so is due to the fact that she is “ the keeper / of generations”, “I am the giver of life / to whole tribes”, which could mean either that she, as a woman is forced to reproduce children of many men, or that she is the back bone of her community.

Either way, this woman faces the lowest of situations and lives on in order to “carry the seeds… give them life…watch them grow…I teach them the songs / I help them to hear / I give them truth”. This Indian woman is a “mother” to all, she teaches them, and most importantly gives them truth so her “children” can live free from such torture.

The voice of this poem is an obvious one; and Indian woman. However there are such moments in this poem where there is a connection between the reader and the poet. The Indian woman is strong, she is a leader and faces all which many do not and manages to hold her head high. She is somewhat a founder of her aboriginal community and although there is an uncertainty as to why, she feels as thought she can overcome what others cannot. The Indian woman is full of knowledge and realizes that there may be such struggles which he must overcome, however she is willing to do so in order to maintain that steady lifestyle for the rest of her community. She is aware that something is wrong (stanza 9), yet understands that there truly is no way out, other than by abiding and staying alive through all of her hardships. This woman is a strong individual and cares for her family.

Jeanette Armstrong manages to portray the general native Indian woman, the triumphs which are faced, and the major downfalls such as the men who raped, beat and ridiculed her. The imagery of this poem is it’s defining feature, the internal structure allows readers to see life through the eyes of an Indian woman and the voice shows the Indian woman’s integrity and knowledge.

The Story of an Indian Woman. (2016, Jun 04). Retrieved from https://studymoose.com/the-story-of-an-indian-woman-essay 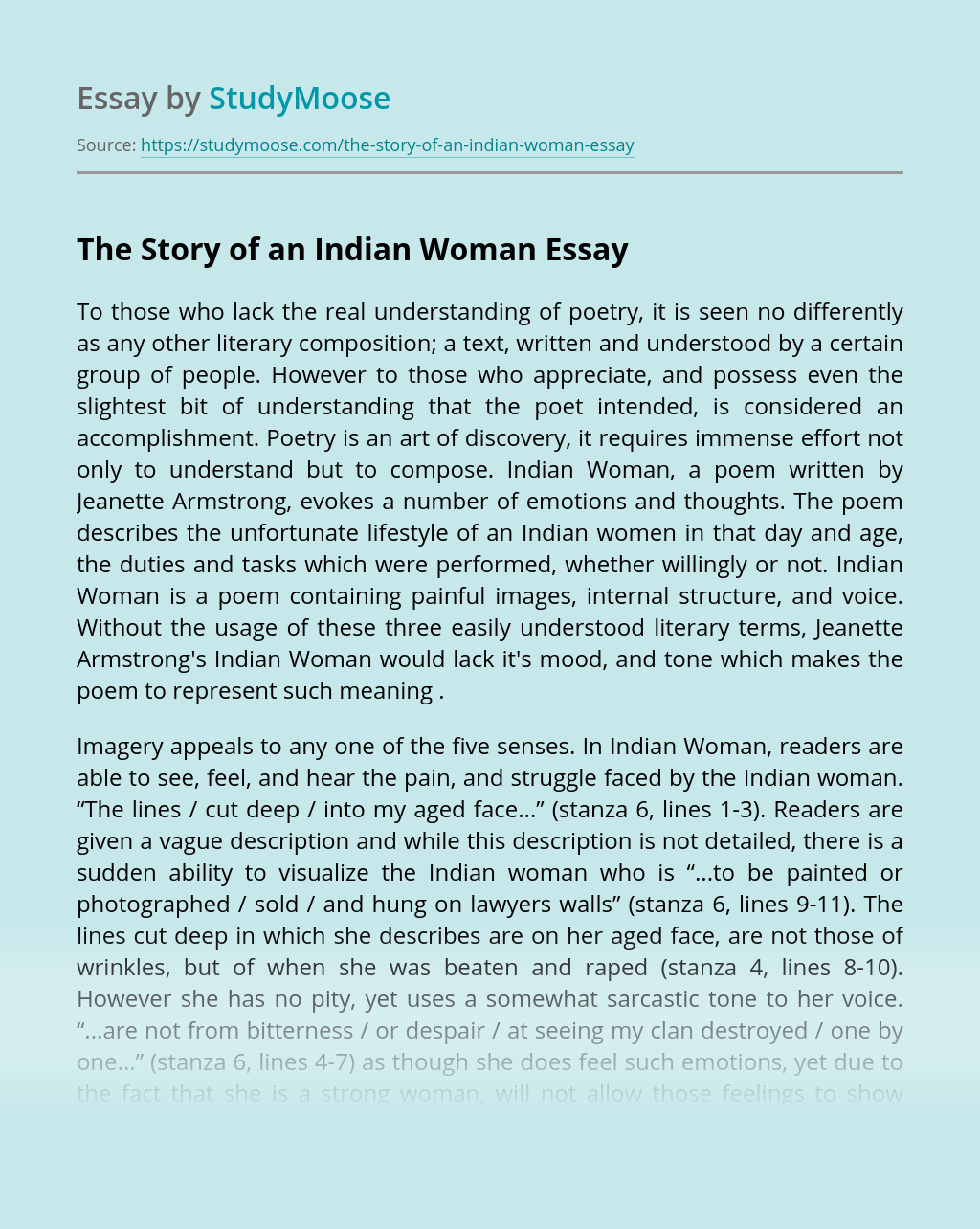 Rate this post Edwin Morgan’s poem ‘trio’ is about a moment where Morgan saw a man and two girls walking in Glasgow, down Buchanan Street in the cold at Christmas time. In the poem Morgan uses different poetic techniques like his specific word choice clever punctuation to show his emotions about this moment and how...

Rate this post Instructions: Analyze the text you selected and fill out the following worksheet in detail. Provide specific examples from the text that support your analysis. 1. Write the title of the text you have analyzed here: “When I Was Fair and Young” by Queen Elizabeth I circa 1585 2. List at least three...

Rate this post A poem which explores the feeling of loss is ‘Visiting Hour’ by Norman MacCaig. In this powerful and moving poem, the writer uses techniques such as imagery, symbolism and word choice to effectively grip the reader and keeps them with him throughout the poem. The poem is set in a hospital as...

Metaphor As Figure of Speech

Rate this post “a skittle of milk” The metaphor, “skittle of milk,” is very effective. The inclusion of the detail of, “milk,” is particularly effective. The white colour of the milk reflects the purity and innocent mind of the persona. Highlighting that Duffy is in her youth and is inexperienced. The comparison of milk bottles...

Themes in Indian Writing in English

Rate this post The end of World War II led to the end of colonialism, which in turn saw the emergence of independent nations, trying to gain a foothold in the world. India was one of those nations. Before Independence, Indian Writing in English had no direct relation to the events which led to Independence....

Fishing on the Susquehanna

Rate this post This poem is told in first person, focusing on the creativities and the power of the creativity from an art painting called “Fishing on the Susquehanna”. The reader seems to be more focused on delivering his message describing how he has actually never ever had any experience of fishing on a river,...

The Section "Body And Soul" In The Poetry Book

Rate this post The section “Body and Soul” in the poetry book Staying Alive edited by Neil Astley proves to be very effective as it provides insight into the human mind and how we process emotions and feelings through the use of poetry. These poems “celebrate the joy of living” (Astley, p. 29) while also...