The song gives a deep insight into humanity

Albert Einstein once said, “War cannot be humanized. It can only be abolished.” While war can sometimes be used as a way to deal with problems, this comes at the cost of thousands of casualties. Bob Dylan wrote and performed “Blowin’ in the Wind” in 1962, just as antiwar conception about the US’s involvement in Vietnam began to spread. At the same time, unrest due to racial tensions simultaneously led to the Civil Rights movement. This song provides a deeper view of humanity and questions the necessity of war.

Don't use plagiarized sources. Get your custom essay on
“ The song gives a deep insight into humanity ”
Get custom paper
NEW! smart matching with writer

By using a variety of literary techniques —symbolism, repetition, and metaphorical language — Dylan tries to depict both how cruel war is and frustration with society’s apathy towards it, thereby exposing the phenomenon of social inequality, and ultimately issuing a plea for world peace.

With careful word choice and the use of symbolism, Dylan describes the foolishness of joining the war. The “cannonballs” he sings symbolize how violent war is. The narrator wonders when the need for war will be “forever banned”.

By using a tangible object to create an image, Dylan shows the vague concept of war with a distinct physical form. He uses “dove”, the universal symbol of peace, to express his eagerness for world peace as he sings, “Yes, ’n’ how many seas must a white dove sail/Before she sleeps in the sand?”. These suggest that for a dove to be resting in the sand, the war must be over and people must live freely. He wants to know when world peace will arrive.

In the third verse, moreover, Dylan speaks even more literally to make clear his message. “Yes, ’n’ how many deaths will it take till he knows/That too many people have died?”. These lines illustrate how horrifying war is. Rather than speaking of violence figuratively, Dylan now remarks that the consequence of such actions is death.

In addition to pointing out the negatives of war, Dylan also mentions humanity and the social injustices. In the first verse, he asks “How many roads must a man walk down/ Before you call him a man”. He is referring to African American people, who suffered under unjust laws that prevented them from exercising basic human rights. He extends this idea later in the song when he sings “Yes, ’n’ how many years can some people exist/Before they’re allowed to be free?”. These lines show how African Americans were treated under the unjust and dehumanizing Jim Crow laws. Although this issue has improved since the song was written, African Americans still face discrimination and racism. Once again, Dylan emphasizes this idea through the lyrics, “How many times must a man look up/Before he can see the sky?”. He uses the word “sky” to symbolize freedom and he believes that everyone should be able to “see the sky”, regardless of the color of their skin.

Along with mentioning antiwar and civil rights concepts, Dylan ultimately composes this song as a call to action for his audience. Most evidently, through the use of phrase repetition such as “how many,” Dylan emphasizes the importance of the subject and pleads with his audience to listen to his message. Dylan chooses to write his song by using many rhetorical questions, which invites the listener to question whether or not they view themselves as indifferent to what uncomfortable realities are right in front of them.

These lines also challenge the listener about their own inactions and reflect Dylan’s distress. In the third verse, Dylan states, “Yes, ’n’ how many ears must one man have/Before he can hear people cry?”. He questions why society, preoccupied with greed, hears the crying and chooses to ignore the pain of the less fortunate and desperate. This shows that Dylan is demanding his audience to stand up for justice and for peace. Using metaphorical language in his work, Dylan repeats the lines, “The answer my friend is blowin’ in the wind/The answer is blowin’ in the wind” at the end of the stanza. He does this to leave the answer to be open-ended and uses the word “wind” to infer that the possibility of peace is always around us, but is only obtainable if society chooses to reach out for it.

Dylan’s ‘Blowin’ in the Wind’ shares his growing dissatisfaction with the Vietnam War and his frustration with racism and society’s apathy towards these important issues. Composed during the uneasy time of the 1960s, this piece serves as a form of nonviolent protest. Throughout the song, Bob Dylan tries to push for the end of violence and discrimination against African Americans. He does so by challenging the listener to open their eyes and stop turning away from the injustices before them. Moreover, Dylan also intends to bring people’s attention to the importance of making peace and realizing that the answer is within reach if we are willing to see it and act.

The song gives a deep insight into humanity. (2021, Dec 02). Retrieved from https://studymoose.com/the-song-gives-a-deep-insight-into-humanity-essay 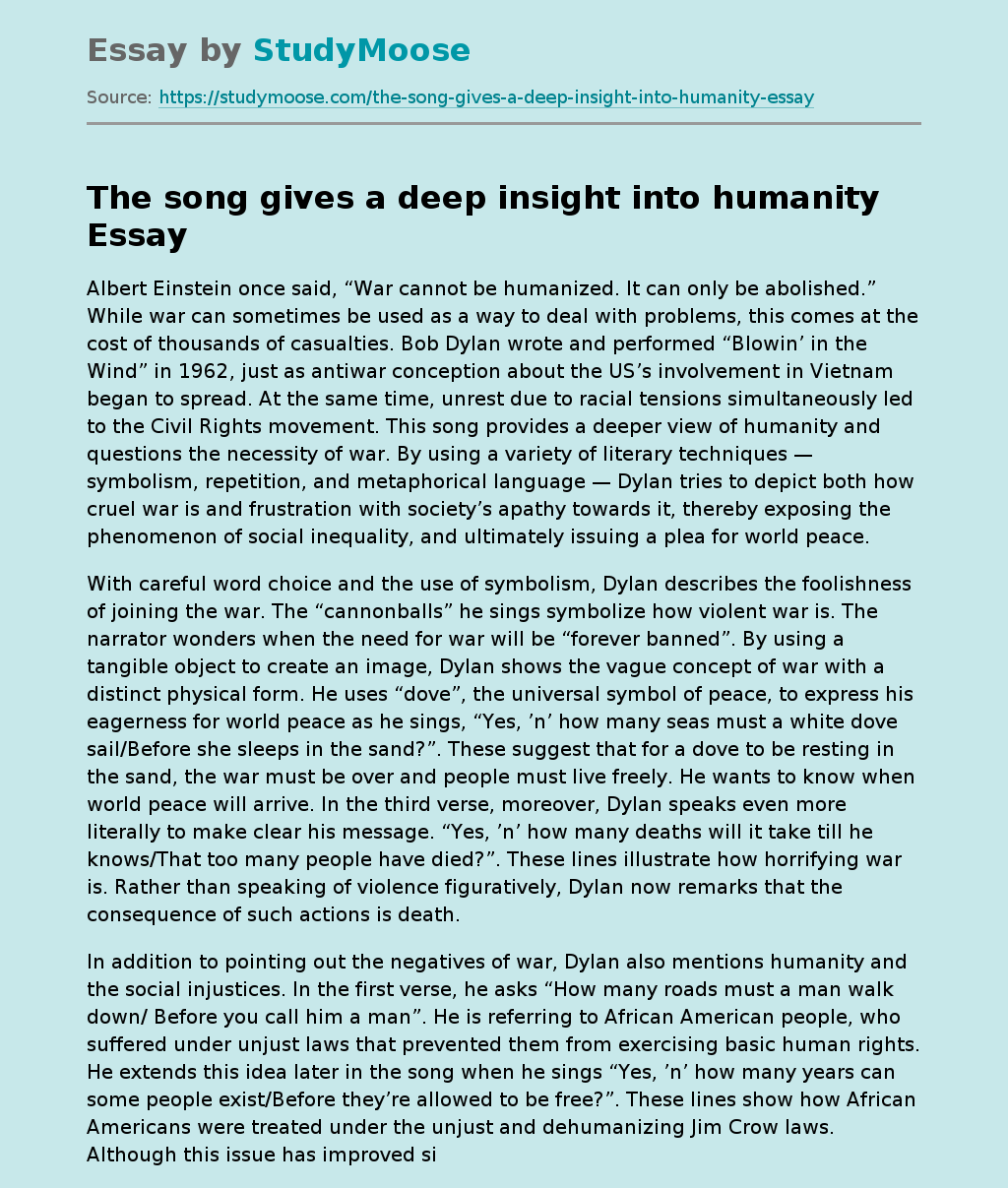