The animated sitcom “The Simpsons” subverts our views about a nuclear family. Instead we learn by watching a dysfunctional family. We see the ups and downs and humour of family life in various episodes and typical family situations.

“The Simpsons” to some degree follow the conventions of a stereotypical sitcom. I will be analysing the episode ‘Bart gets an F’ to support my thoughts. In this paragraph I will be referring to what a sitcom is, how it has changed throughout the years and why sitcoms are so popular.

Don't use plagiarized sources. Get your custom essay on
“ The Simpsons Analysis ”
Get custom paper
NEW! smart matching with writer

A sitcom is a 22 minute long show, which presents the viewer with a ‘world’ within the show. A sitcom also follows the narrative structure of orientation, complication, resolution, evaluation and re-orientation.

The creators of “The Simpsons” satirize stereotypes to create humour. In the 1950’s sitcoms, the families would get along, listen to each other, take care of each other and they would be smartly dressed at all times. However, after the 1950’s it all seemed to change: no-one would get along, they will always argue, the mother and father would always fight and they would do whatever they wished.

The nuclear family and the dysfunctional yellow-skinned, four-fingered Simpson family are shown through the opening of “The Simpsons”.

We are firstly introduced to Bart, the most confrontational, funny, naughty and disrespectful kid in school. We see him in school; however, this is dysfunctional as he is in detention writing on the board “I will not teach others to fly”. This shows us satirise as a normal child will not be that often in detention. The creator also changes the quotes of the writing to show that he is in detention all the time. Secondly, we are introduced to Homer; the clumsy, dumb and often drunk father, who is at work.

This is typical of a dad, but then it is subverted when he is shown carelessly working in the power plant. Next is Marge, the hard working, sensible, caring mother who is shopping and losing her child, Maggie. Maggie is the 3rd child, who is a dummy sucking 1-year-old. And finally, Lisa, the brainiest gifted child in the school. We see her playing an instrument in school. However she is playing her own tune. By watching the opening sequence we know that the situations that occur in the Simpsons are subverted. Through the opening sequence we see some stereotypical behaviour as well as some subverted behaviour.

In the episode ‘Bart gets a F’, we can tell from the title who the episode is based on and a bit about the plot. Through the episode we get to see the orientation (the 1st shot and 1st character introduced), the complication (problem that arises), the resolution (how the complication is resolved), the evaluation (how the family come together) and the re-orientation (how it is back to the way it started). We firstly hear the voice of Bart and see the setting of the school, so we straightaway know it is based on Bart (orientation). The main plot is after failing a history test, Bart strikes a deal with Martin Prince to make Martin cool in return for tutoring Bart, if Bart doesn’t improve, he will be held back in his grade (complication).

Bart successfully transforms Martin from the clever, caring, sensitive, high-quality boy into a rude, playful naughty and regular kid, bur Martin fails on his side of the bargain and Bart is once again in danger of failing. After an all-night study session, Bart still fails but he manages to impress Mrs. Krabappel with his grasp of history (resolution) and she gives him a D-minus. Homer is proud to hang this grade up on the fridge (evaluation). After the excitement, Bart kisses the teacher and then after realizes what he has done and starts to spit on the floor with disgust (re-orientation).

In this episode we see both sides of a traditional family and a dysfunctional family. Expectations of characters are satirised. An example of this is the parents. We expect the parents to praise, support, care and teach their children. But in “The Simpsons” we see the parents encouraging their son not to study. They show that they have no faith in Bart as they call him ‘Dim’. We see the same situations occurring to different characters, for example the teacher. The expectation of the teacher is satirised as we expect teachers to be understanding, helpful, caring and faithful to their students. This is again satirised when the teacher quotes, “I thought you’d be used to failing”. This shows us she has no faith in her pupil, Bart. In this episode of “The Simpsons” we see typical stereotyped situations satirised and changed according to characters and their beliefs.

“The Simpsons” fulfils various stereotypes of a sitcom genre but generally subverts them. I will examine the extent to which they do this by referring to the episode ‘Bart gets a F’. The first situation that occurs is when the psychiatrist comes to talk to the parents about Bart’s grades. It is satirised as we see Homer not listening and not paying attention. They show this as they quote, ‘bla bla bla bla bla bla bla’.

“The Simpsons” uses various comic devices to create humour. The also uses different comic forms. They would use parody, gags, comedy of the absurd and slapstick. A good way in which they create humour is by satirising situations where the way we expect people to act is changed. They also satirise stereotypes. In “The Simpsons” the audience can predict what is going to happen next. The audiences are interested in the Simpsons as it exaggerates the animation. The Simpsons have four fingers and they are yellow skinned. The characters of “The Simpsons” create humour by using repeated catch phrases, example ‘Doh!’ ‘Don’t have a cow man!’ We find the various actions of the characters humorous, as they are well known for example Homer strangles Bart when he is frustrated. Overall, I believe “The Simpsons” are popular because of all the types of humour used during the episodes. This humour appeals to a wide range of audiences.

“The Simpsons” is a very popular and well-known sitcom. The appeal of the Simpsons is greatly due to the fact that it appeals to all types of people. People of all ages find humour in it because of the fact that the characters never grow older, the use of flashbacks and flashfowards, the variety of episodes and the characters always turn back to the way they started. A reason why we can tell it is a true sitcom is because they always have a complication that occurs which is later resolved. “The Simpsons” as a sitcom, is well known worldwide. It is broadcast in 100 countries. The influence of “The Simpsons” has created programs like “South Park”, “Ren and Stimpy” and “Fresh Prince of Bel Air”. The Simpsons are not a stereotypical family, they are dysfunctional and are satirized, and this is the main reason why they have remained so popular. 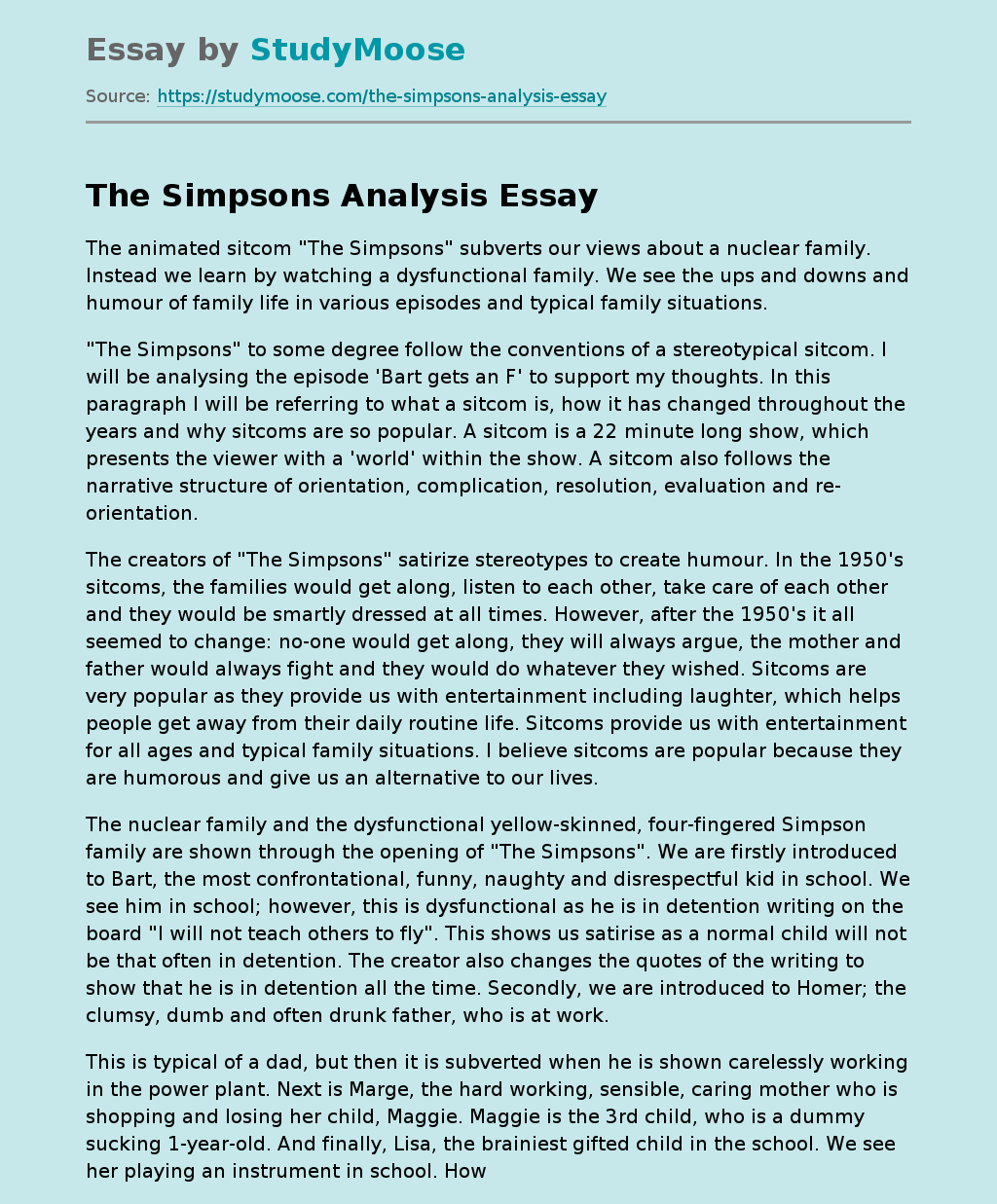