The portrayal of the family in 'The Simpsons'

In the majority of episodes of The Simpsons, the plots are similar in the respect that one or more family members are involved in a predicament that always has a comical element, and involves Homer Simpson saying ‘D’oh! ‘. The plots are more often than not character driven, for example, in the episode ‘Brother Where Art Thou? ‘ Homer Simpson finds out that he has a half brother that he never knew. Homer then embarks on a journey to find him, when he does; he discovers that his brother is a millionaire.

Don't use plagiarized sources. Get your custom essay on
“ The portrayal of the family in ‘The Simpsons’ ”
Get custom paper
NEW! smart matching with writer

In the end, he manages to bankrupt his long lost brother, and they part ways on bad terms. The central character in that particular episode is Homer; in the episode ‘Lisa’s Pony’, the central character is Lisa. Even though the plots are always similar, the resolutions differ so that the viewer is kept interested in the series. To say that the Simpson’s are a stereotypical ‘nuclear family’ would be a dubious statement.

They all have their own personalities, which have elements of certain stereotypes, but not enough of one in particular to dominate the others in their personality.

Homer Simpson is a beer drinking couch potato who likes nothing more than to watch the football game on the television. Marge Simpson is a maternal housewife and a possible nag of the family. Contrary to the point I previously made, I think that the children in the family are stereotyped; Bart, who is the ‘Dennis the Menace’ nuisance and underachiever, Lisa who’s intelligence is far greater than anyone else’s in the family, and Maggie, who never speaks, but still manages to indulge herself in a little mischief.

By the writers using stereotypes in the programme, they make it easier for people to relate to the characters, and enable the viewer to understand the plot more. For example in the episode ‘Bart’s Dog Gets Out’, Santa’s Little Helper (i. e. the dog) escapes, and Bart’s first instinct is to get out and find him. With Homer, he would probably propose getting a new one, or discourage his family from looking for him. The relationships in The Simpsons are not stereotypical because that would make the programme less comical.

Even in the opening sequence however, we still get an indication of the type of characters they are. Marge has a strong relationships with Maggie, and we see them rushing from shopping, which shows Marge’s role as the housewife. We see Bart in school writing lines on a blackboard, and then weaving in and out of pedestrians in his rush to get home; this shows that he is troublesome at school, but also virtually carefree. Lisa is playing in the school band, but then breaks off, and is sent out, seemingly because she plays too well for the rest of the class to keep up; this illustrates her talent.

She also rides a bicycle, which one could argue, means that she is a conservative person, which she is. Homer races off from work, and in doing so ends up with a glowing radioactive rod in the back of his radiation suit, which shows he is both careless, and lacks common sense. I think that the show itself is aimed at younger audiences, for example teenagers and young adults because; the programme has some unrealistic features such as the Simpson’s skin colour and the fact that they have four fingers. Although the programme has other cultures (i. e.

Indians and Black people), the main family, which are the Simpsons, have yellow as a skin colour. Their skin colour can be argued whether it is realistic or unrealistic because, yellow may have been used because it is a primary colour, and primary colours are attractive and eye catching, but; on the other hand it may have a meaning which could be ‘universal’ because it is neither black nor white. Using yellow as a skin colour makes it known to viewers that racism is ruled out and I believe that yellow is a good example for this because it is warm, bright and welcoming; and this makes a good statement.

Another argument could arise that their skin colour is yellow because if they were to be a real life equivalent you would assume them to be Caucasian; and so their skin is drawn as yellow to combat the idea of the common ‘black or white’ situation. The fact that all the characters in The Simpsons have four fingers shows that they are all a unique and unified community despite age and race, this also makes a good statement. Both the skin colour and the four fingers are attractive to young viewers but they also have meaning to older viewers, and different parts of the show are aimed at different audiences.

An example of this would be in the episode ‘Lisa’s Pony’; it could be argued that it is aimed at younger children, especially girls. The episode ‘Brother, Where Art Thou? ‘ would be aimed at the older audiences, especially men, but whatever the case it is possible for a variety of age groups to watch and enjoy the programme. The allusions in the show itself prove to the audience that the show is up to date, and it gives the show a sharper angle of realism, which again would attract people to watch the show.

An allusion from the film E. T. was used in The Simpsons. The film E. T. is most known for the contact of alien and human with their finger touching each other. This was like a connection. This connection was seen when Lisa and her mother did the same thing. That one moment in The Simpsons held much meaning, it showed the personal relationship with Marge and Lisa, and Marge’s maternal and loving side. It also showed that Marge is a significant figure in Lisa’s life. This allusion can be very heart-warming for viewers to see.

The portrayal of the family in 'The Simpsons'. (2017, Aug 20). Retrieved from https://studymoose.com/the-portrayal-of-the-family-in-the-simpsons-essay 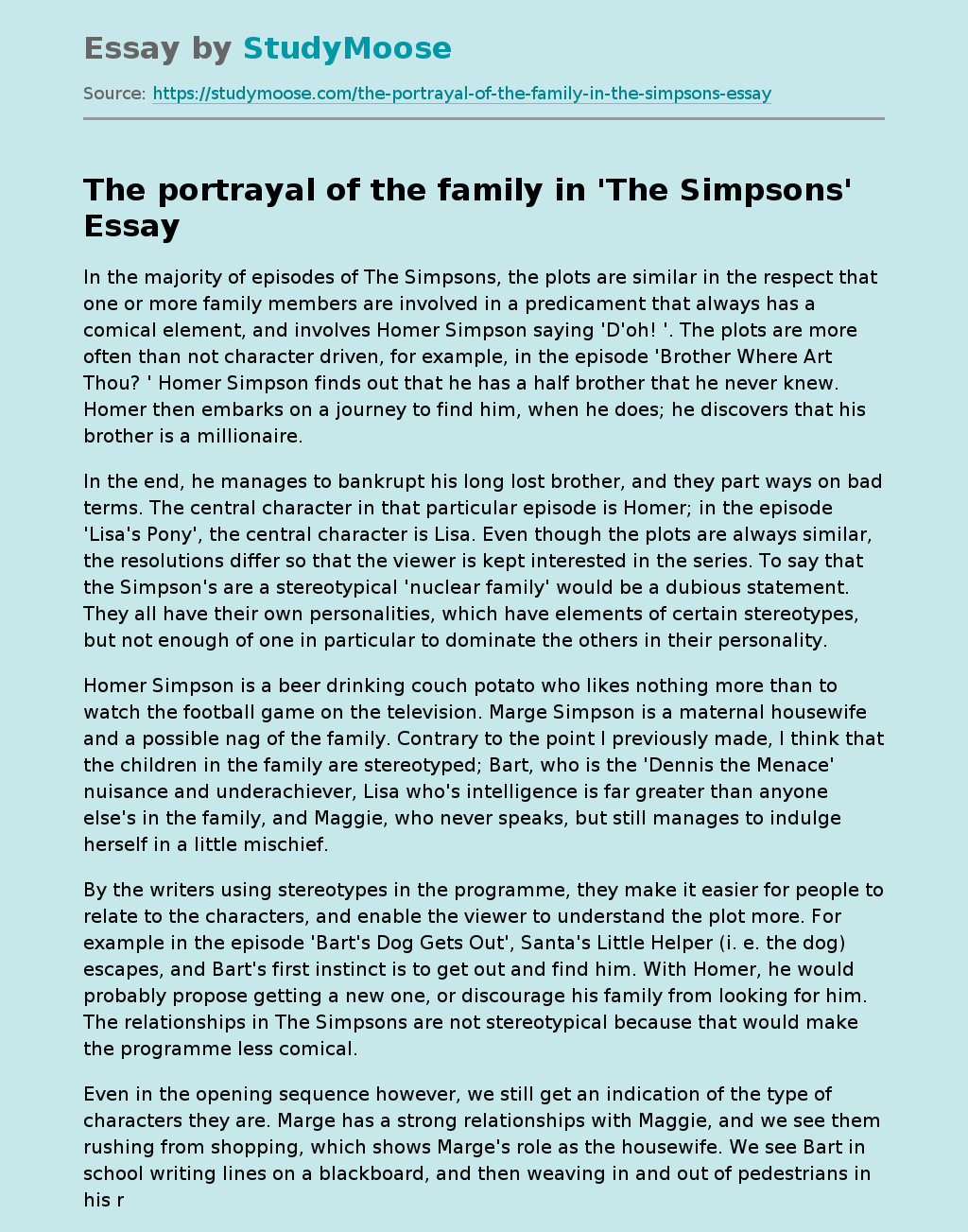